LONDON - On June 22, 2000, Delta and three other airlines founded SkyTeam.

Fast forward 15 years and SkyTeam has grown dramatically, offering a network that eases connections among more than 1,000 destinations around the world.

In honor of SkyTeam's 15th anniversary, here are 15 facts about SkyTeam. 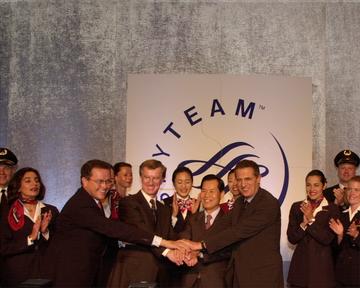 1. Along with Delta, the four founding members along were AeroMéxico, Air France  and Korean Air.

2. Today, SkyTeam has 20 members and is the second largest alliance, behind StarAlliance and ahead of Oneworld.

4. The network covers 90 percent of the world’s top aviation markets, with 1,052 destinations.

5. Approximately every five seconds a flight operated by Delta or a SkyTeam member takes off somewhere around the world.

7. Delta was the first member to unveil an aircraft in SkyTeam livery, or aircraft paint scheme. That was on March 31, 2009.

8. More than 26 million passengers connect from one member to another each year.

9. Delta developed SkyPriority, a red-carpet priority service to speed Elite Plus, First and Business Class customers through the airport, which is now offered alliance-wide at more than 1,000 airports.

10. SkyTeam is the No. 1 airline alliance in China, with four members from the Greater China Region.

12. The largest SkyTeam hub is Atlanta, which is served by four SkyTeam members: Delta, Air France, KLM and Korean Air.