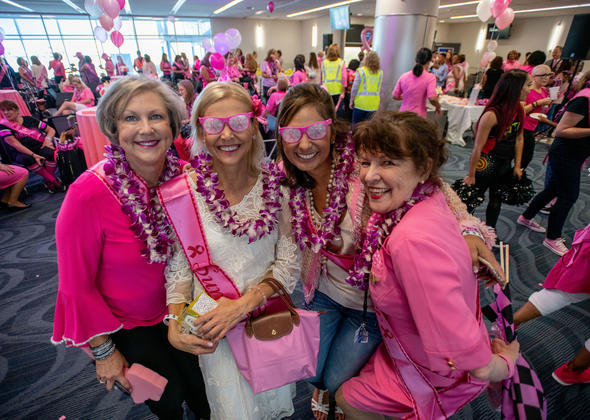 Delta employees and customers have been united in their passion for the work of the Breast Cancer Research Foundation since 2005. Each October, Delta kicks off a month-long campaign to generate awareness and money for BCRF with our 'Breast Cancer One' employee survivor flight. On this year's flight from Atlanta to San Diego, survivors raised more than $25,000 for life-saving research.

In honor of the 15th Breast Cancer One flight, here are 15 facts about Delta's partnership with BCRF as we launch 2019 fundraising:

Delta employees will wear pink uniforms and sell pink products, including lemonade and headsets, on board and in Delta Sky Clubs throughout October. Customers and employees can donate to BCRF in flight and virtually year-round on delta.com and through SkyWish, the charitable arm of our SkyMiles frequent flyer program.

Customers can purchase Pink Boutique merchandise through the online store, with proceeds benefitting BCRF research projects. Also, Delta is donating a percentage of onboard food and beverage sales to BCRF during October.

About the Breast Cancer Research Foundation

BCRF is a nonprofit organization committed to achieving prevention and a cure for breast cancer. BCRF provides critical funding for cancer research worldwide to fuel advances in tumor biology, genetics, prevention, treatment, metastasis and survivorship. Since its founding in 1993 by Evelyn H. Lauder, BCRF has raised more than half a billion dollars for lifesaving research. In 2019-2020, BCRF will award $66 million in annual grants to nearly 275 scientists from top universities and medical institutions around the globe.​