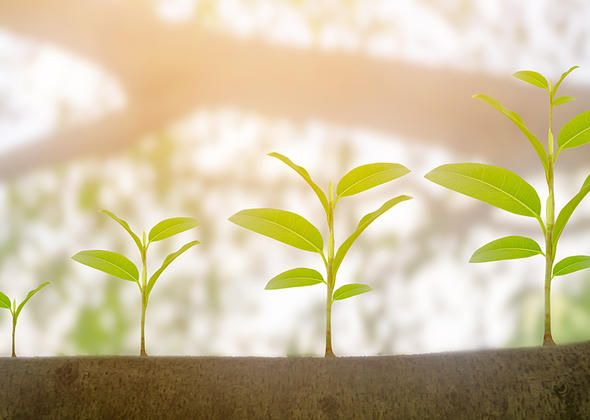 Delta is committed to finding new ways to protect the environment and has tapped the generation next in line to inherit the Earth — a group of young, passionate ecowarriors, as part of the airline's inaugural Youth Advisory Board on Sustainability.

The board, made up of 16 members from 11 U.S. states and American Samoa aged 12-18, includes environmental club leaders, social impact entrepreneurs and founders of multiple green nonprofits. The Youth Advisory Board was created to engage young people in the communities Delta serves, who would help guide and support its sustainability initiatives, particularly around reducing waste in the operation. Board members benefit from personal and professional development, and in return, Delta benefits by better understanding the way the younger generation thinks about sustainability.

"This group of passionate, forward-thinking young adults is dedicated to creating a healthier planet," said Alison Lathrop, Delta's Managing Director — Global Environment, Sustainability and Compliance. "They're future global leaders in this space, and we want their insight into how our business can produce more impactful results for the long-term. No generation right now has a greater stake in protecting the environment than theirs, and that's why their vision for the future is invaluable."

Board members applied through Delta's partnership with the Captain Planet Foundation for the opportunity to make a direct impact on the business. Applicants had to demonstrate a measureable commitment to sustainability, whether through their education, extracurricular activities or personal lives.

The advisory board visited Delta's world headquarters in Atlanta this summer to learn the ins and outs of the operation, as they developed pitches on opportunities for the company to enhance its environmental stewardship. Board members have a direct line to Delta leadership to hear their suggestions.

Delta's sustainability strategy is comprehensive and focuses on true responsibility. The airline drives accountability and evaluates areas of opportunity across the business to lower its environmental impact. While working to reduce carbon emissions by 50 percent by 2050, Delta flew its first of 20 carbon-neutral delivery flights using biofuels and carbon offsets this summer, capped its carbon emissions at 2012 levels by purchasing offsets, removed a variety of single-use plastic items onboard, in amenity kits, and in Delta Sky Clubs, and has led initiatives like donating and upcycling retired uniforms.

Meet the members of Delta's Youth Advisory Board below: 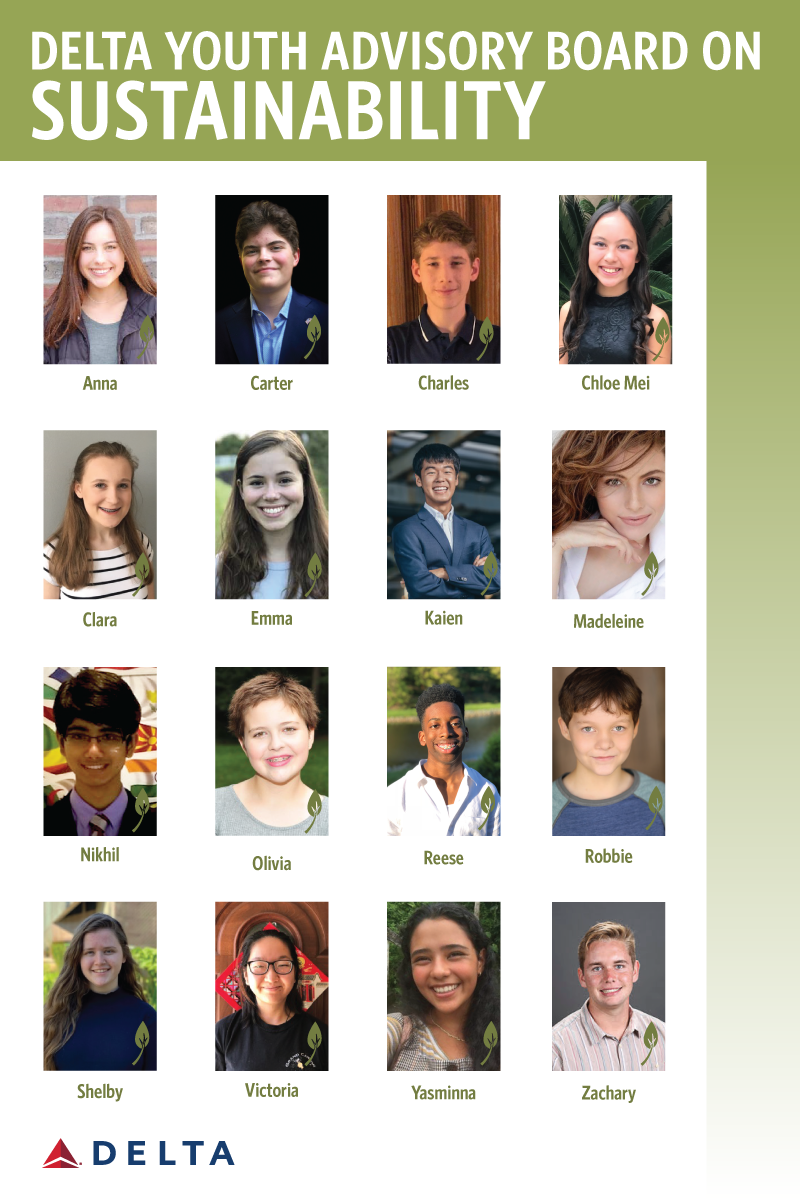 Shelby founded Jr. Ocean Guardians to help educate children on how their actions can help or hurt the environment.  She created the "No Straw November" initiative to build awareness around single-use plastic straws. In August 2018, the California legislature approved SCR 139 - No Straw November, officially recognizing the month as "No Straw November."

Victoria advocates for environmental conservation through art, science research and outreach. She attended the United Nations Climate Protection program in China as a UN Future Leader to collaborate on contemporary issues.

Kaien strives to search for clean solutions to address environmental challenges, like unlocking indigenous resources for renewable energy. His work has won the 2018 Presidential Youth Environmental Award, the $10,000 Marconi Samueli Award for Innovation, and was featured by Discovery Education, Washington Post, NBC, and Fox & Friends.

Zach is co-president of his school's Ecology Club where he successfully advocated for the implementation of additional recycling cans around his school's campus and educated the student body about using reusable water bottles. Zach is also a member of the Student Climate Emergency Coalition where he hosted a panel at the Los Angeles Congress of Neighbors with panelists like the Chief Sustainability Officer of UCLA and a climate scientist at Jet Propulsion Laboratory.

Olivia teamed up with her brother Carter to start their own nonprofit called One More Generation in 2009, in an effort to save endangered species for at least One More Generation...and beyond. They have authored several award-winning programs such as their Plastic and Recycling Awareness Curriculum and their global OneLessStraw Campaign.

Robbie created his non-profit Kids Speak for Parks to ensure that U.S. national parks and monuments remain protected long into the future. He is building an army of activists, including fourth-grade students (who can visit U.S. national parks free of charge), who will advocate for the parks.

In April 2018, Chloe Mei created her own campaign, skiptheplasticstraw.com, to educate people about the harmful effects of single-use plastic straws. She successfully lobbied her school district to go straw-free, and has convinced two more school districts to do the same.

After attending a summit on solutions for plastic ocean pollutions in the 7th grade, Emma began working with her community to increase recycling bins and plastic pollution awareness. She regularly works with ocean-saving groups.

Clara is particularly interested in helping refugees who have suffered from both natural disasters and/or political persecution in the Middle East. She is a leader of the Students Advocating for a Greener Environment club at her high school, and is leading the school's waste audit in conjunction with Indiana University in hopes of arguing for a uniform recycling policy.

With his sister Olivia, Carter started non-profit One More Generation. Carter has been invited to the White House, has spoken at the UN, and delivered numerous keynote speeches around the world, including at the recent G7 Oceans Summit. He continues to reach out to major corporations such as Delta to find ways he can contribute to their overall sustainability efforts.

Nikhil's experiences with environmental issues began as a cub scout in the 3rd grade, where he frequently participated in community service projects that focused on environmental cleanup and de-littering. His particular interest in air pollution began during his travels to India and seeing how prevalent of a problem air pollution can be.

Yasminna was raised in American Samoa, an island considered one of the areas with the cleanest and most pristine air in the world.  American Samoa is known for being eco-friendly and has stringent regulations to protect the environment. Yasminna has made it her prerogative to become active in environmental issues both on a global and local scale.

Anna is a member of the National Youth Leadership Council for Jane Goodall's Roots and Shoots  program. She has worked with the Center for Conservation Leadership and The Global Youth Leadership Institute. As part of her work, she built and installed Mason Bee houses in her community and taught over 500 students about the importance of pollinators.

Reese believes that it is his responsibility as an inhabitant of this Earth to take care of it as it has taken care of him. He works to promote environmental sustainability and other activities outside of the board such as his own recycling initiative, "Reese-cycling."

In addition to having his pilot's license, Charles is motivated to find new resources that will reduce the overall effect aircraft have on the environment. He is an ambassador of his environmental club and writing a children's book series that will introduce young children to sustainability. His vision is to help reduce the carbon footprint for Delta.​​