1Q earnings: by the numbers

3 - Delta’s 3rd consecutive profitable 1st quarter. In the airline industry’s traditionally weakest quarter, Delta was able to maintain profitability and break out of the seasonal pattern through its innovative business model and excellent operational performance.

12 - The 1st Quarter marks the 12th consecutive quarter of profitability for Delta.

$594 million – Pre-tax profit* for the quarter, up 34 percent from the same period last year.

$7.4 billion–Adjusted net debt* at the end of Q1. Delta has achieved nearly $10 billion in net debt reduction since 2009 and is on track to reduce its debt to $5 billion by year end 2016. This significant debt reduction helps provides long-term stability, lowers interest expense and provides more flexibility within the business.

$511 Million – Free cash flow* for the quarter. That cash reduces overall debt, rewards shareholders and allows the airline to invest in its people and product. Less than 10 percent of the S&P industrials generate this much free cash flow.

$904 Million – Amount set aside during the quarter to fund Delta’s pension plans.

$86 Million – Profit Delta’s Monroe Energy refinery made in this quarter vs a $40 Million loss during same period last year. 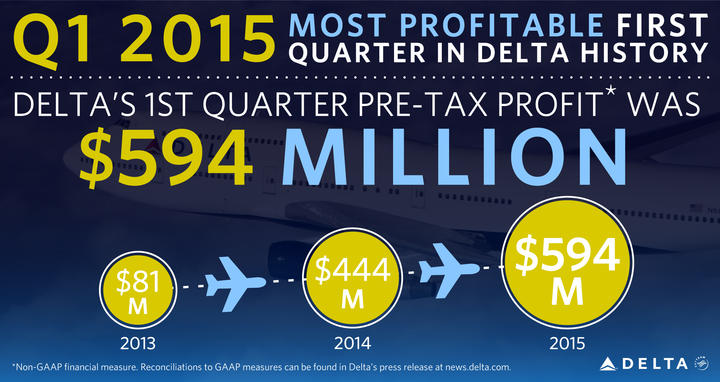 * A non-GAAP financial measure.  Reconciliations to the comparable GAAP measures can be found in the press release.