Seeing the invisible — that's the super power Delta's industry-only Flight Weather Viewer app gives Delta pilots, and why Delta is the only global airline to experience a decrease in severe turbulence encounters over the last few years, despite a greater number of severe weather events worldwide. ​

Initially introduced in 2016, Delta remains the only airline to harness the power of big data to reduce the impact of turbulence through its real-time, proprietary flight deck weather app. The latest version is amped up with functionality that has made it a constant companion for Delta pilots who are now using it on the vast majority of the global airline's flights to deliver a safer, more comfortable and fuel efficient flight. Here's why:

1. It takes the guess work out of finding smooth air

The Flight Weather Viewer app is loaded on Delta pilots' electronic flight bag tablets that go everywhere with them and gets mounted in the flight deck for each flight. It allows pilots to plug in their flight plan before or during a flight, then view a depiction of turbulence relative to their intended path on a 3D color-coded display of the airspace with a 0-100 intensity scale. 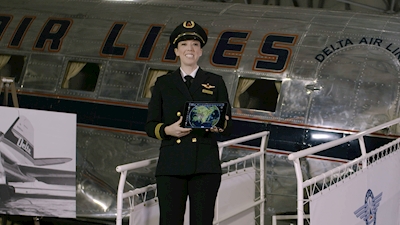 Other weather items like hail, cloud top heights and volcanic ash can also be displayed at a pilot's discretion. Setting Delta's app apart is a 30-minute look-forward box that illustrates what lies ahead on the flight's current trajectory with data customized to that aircraft type, since turbulence affects a 737 narrowbody differently than a much larger A330. All of this presents a pilot with objective information about the best path to avoid turbulence, or manage cabin expectations about when and how much turbulence they will encounter.

"Collecting millions of data points is the easy part," sa​id Jim Graham, Senior Vice President — Flight Ops. "What sets Delta apart is our ability to harness that data and deliver it in a meaningful way that helps Delta people improve the flight experience. Flight Weather Viewer is an incredible example of that kind of innovation where we're able to measure the air space and show a pilot how that air space is going to impact the aircraft they are operating at that moment — it's powerful, cutting edge technology."

2. It reduces injuries and customer stress

Improving safety is the No. 1 purpose of Delta's Flight Weather Viewer app. Since turbulence can't always be avoided, the app gives greater predictability to when it's going to occur, and has contributed to year-over-year reduction in turbulence-related crew injuries.

By using the app during pre-flight huddles, pilots brief flight attendants on potential weather issues that may impact service during flight. This allows the crew to work together to provide service at the optimal time, and make sure flight attendants and customers are seated prior to encountering turbulence. Pilots can also use the app during flight to let customers and crew know when they'll be entering rough air and about how long it will last. This helps customers trust the seatbelt sign while reducing stress for nervous travelers who now know what to expect.

3. It does good by the environment 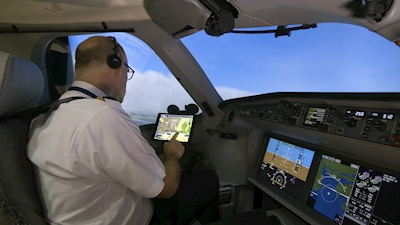 Delta pilots no longer need to "search" for smooth air by changing altitudes multiple times. Instead, they can rely on the app to show the best course ahead. On a two-hour flight a pilot can change altitudes up to seven times attempting to find smooth air. Using the Flight Weather Viewer, Delta pilots hav​e brought that average number down to two or less, resulting in a reduction in carbon emissions of around 80,000 metric tons over one year.

"I've been operating flights where the app shows me a smooth altitude when both controllers and other flights have reported rough rides everywhere. When I'm able to request an altitude that looks good in the Flight Weather Viewer and then report a smooth ride, it surprises everyone," said Captain Greg Young. "This is one of a number of tools that empowers us to make a difference for our customers and fellow crew members."

In one step, Delta has bridged the gap between Wright brothers-era weather technology and the 21st century. No longer do Delta pilots gauge turbulence by how much their coffee shakes or with traditional pre-flight reports known as PIREPS that are based on what other pilots encountered flying through the dynamic air space hours earlier. Meanwhile, Delta’s team of world-class meteorologists and dispatchers continue guiding the airline’s operation to mitigate severe weather network wide.

The Flight Weather Viewer replaces that subjective and outdated information with special algorithms to generate turbulence reports from existing avionics sensors installed on more than half of the airline's fleet. These big data reports are fed back into forecast models and made available to the app in real time. Fast, secure flight deck Wi-Fi connectivity is the final link that brings all this data to life during flight.

This unique approach for delivering weather, including live turbulence reports and forecasts to the flight deck has been patented by Delta to maintain the integrity of this unique approach. Delta has done this work in collaboration with key members of the weather community, including the NTSB, FAA and NCAR to improve safety. Between 2013 and 2014, the FAA supported a demonstration to validate this new technology.