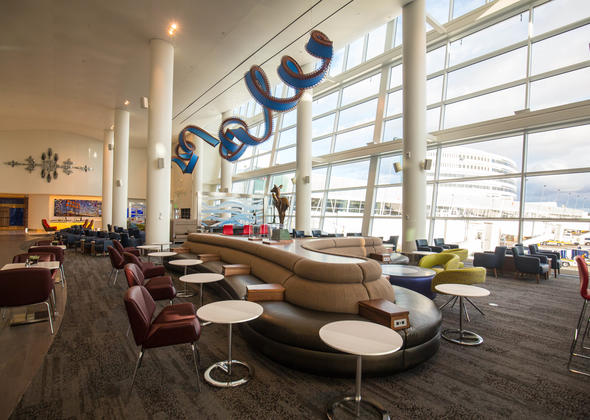 Delta is collaborating with prominent Seattle chef and restaurateur Ethan Stowell to bring fresh, seasonal and locally sourced fare to its Delta Sky Club located on Concourse A at Seattle-Tacoma International Airport. Beginning this week, Delta Sky Club will feature menu selections created by Stowell, who is known throughout the Pacific Northwest and beyond for creating Seattle-inspired cuisine with an international appeal.

The current Seattle Delta Sky Club menu features a variety of salads, including a house-roasted chicken salad with Washington-grown jazz apples, cranberries, dill and mint, as well as a weekly rotation of crudité and dips, including mixed Mediterranean olives with orange zest and fresh herbs and Tzatziki with cucumber, mint, dill, lemon, garlic and plain yogurt. Stowell’s signature pasta sauce, comprised of San Marzano tomatoes, Italian sausage, Parmesan cheese and fresh basil, along with rigatoni pasta is also available to travelers looking for a heartier meal. Guests can satisfy cravings with fresh-popped popcorn with Stowell’s popular topping. The menu will change seasonally.

“Our goal for the new Delta Sky Club was to make this the best experience at Sea-Tac, and one of the ways we accomplish that is through our culinary philosophy, which brings together local flavors with fresh, seasonal ingredients,” said Marc Ferguson, Delta’s General Manager – Delta Sky Club Experience. “Ethan’s menu delivers on that philosophy and gives our guests a taste of Seattle without ever leaving the airport.”

“We appreciate and respect the commitment Delta has to the community and are honored to partner with them on creating a unique Seattle food experience for travelers,” said Ethan Stowell.

This isn’t the first time Delta and Stowell have teamed up. In 2015, Stowell, along with Los Angeles-based chefs Vinny Dotolo and Jon Shook, collaborated on Delta Swap Chef, in which Dotolo and Shook worked alongside Stowell at his popular Tavolata restaurant in Seattle for a one-night-only restaurant experience, and Stowell took a trip to Dotolo and Shook’s Animal Restaurant in Los Angeles. The program was an innovative approach to curating conversations around local food sourcing and in-flight menu development.

In November, Delta opened its 21,000 sq. ft. Delta Sky Club at Sea-Tac, featuring fantastic views of Mt. Rainier, an in-house spa, menus curated by Stowell and wine lists built by master sommelier Andrea Robinson, among other amenities. The Seattle club is part of Delta’s continued investment in Seattle and commitment to serving customers in the Pacific Northwest.

About Delta in Seattle

Delta is the largest global carrier at Sea-Tac and has more than tripled flights and destinations at its Seattle hub since 2012. Every Delta flight from Seattle features jet service with Delta One/First Class and Delta Comfort+ seating. Free entertainment is available via Delta Studio, and Wi-Fi is available on all long-haul international flights and nearly every domestic flight operating in the contiguous U.S. The airline opened a 21,000 sq. ft.  Delta Sky Club – the third largest Sky Club in Delta’s system – located between Concourses A and B in late 2016.

Delta people are active members of the Seattle community, giving their time and resources to more than 100 organizations close to the hearts of Seattleites, including Habitat for Humanity – Seattle King County, Boys & Girls Club of King County, PATH, Seattle Theatre Group, Seattle Pride and End AIDS Walk Seattle, among others. The airline has hired more than 1,000 employees since 2013, and its expansion at Sea-Tac is estimated to contribute $571 million annually in total economic output. In 2016, Delta paid out more than $53 million in profit sharing to its Seattle employees and committed to contributing 1 percent of its net income from the previous year to key charitable organizations, including organizations in Seattle.