The weeklong program, hosted by Delta and the Organization of Black Aerospace Professionals (OBAP), provided students with mentoring, training and exposure to dozens of career paths in the aviation and aerospace industries. This was Delta’s 19th year sponsoring ACE Academy, which is a key part of the airline’s commitment to seek diversity, promote inclusion and drive accountability. To uphold this commitment, Delta continuously strives to build its talent pipeline and shape its future.

Kenya Ashley, 16, had plans of becoming a civil engineer prior to attending ACE Academy, but is now considering exploring a career in aviation.

“This opportunity gives me excitement and makes me think, ‘Maybe I do want to be a pilot. Maybe I do want to have a career in the aviation industry,’” Ashley said. “What I’ve taken away from the program is to always try different things, because you might end up liking it.”

ACE students received a behind-the-scenes look into the operations of both the Hartsfield-Jackson Atlanta International Airport and UPS Flight Line; flew the same Boeing 777 simulator that Delta pilots use during training; and learned how representatives from numerous teams work together to support pilots and flight attendants in the air while touring Delta’s OCC.

Vashti Canty, In-Flight Service technical facilitator and member of the Global Diversity & Inclusion team, said she’s grateful to be a part of a company that’s dedicated to changing the face of aviation.

“If Delta is able to fuel its pipeline from the seeds that we’re planting right now, I definitely want to be a part of it,” said Canty, who has been involved with ACE Academy for the past decade. “In 20 years, I want to be able to hop on one of our aircraft and see a former ACE student. Whether the person has become a pilot, flight attendant, mechanic or an engineer, whatever their career, it’ll be great knowing Delta played a role in making that happen.”

First Officer Kyle Greene, a 2007 graduate of the Atlanta ACE Academy, knows firsthand the life-changing impact the program can have on aspiring aviators.

"A lot of these kids have never been on an airplane or know how to get into an aviation-related field," said Greene, co-director of Atlanta's ACE Academy. "This program exposes them at an early age to a variety of career fields in aviation, in addition to pilot and flight attendant jobs. We show them the maintenance side of things, airport operations, the OCC and how to run an airline. And through this program youth get to meet people and ask questions. That's the biggest impact."

During the ACE Academy graduation ceremony — which took place Friday, July 21 — representatives from Delta, UPS and the U.S. Navy shared words of encouragement to the students before they walked the stage to receive their certificates.

Among those in attendance were Delta’s first male and female African-American pilots, Capt. Sam Graddy and Capt. Stephanie Johnson. For more than 20 years, Johnson in particular has dedicated her time to ACE Academy — currently the co-director of Detroit’s ACE Academy, director of Cleveland’s ACE Academy as well as the Midwest Regional Director of OBAP.

“One of my favorite sayings is, ‘A goal is a dream taken seriously,’” Johnson said to the students. “Set your goals high and attack them with enthusiasm. We’re investing in your future, but the future is yours to make. Reach your goals.” 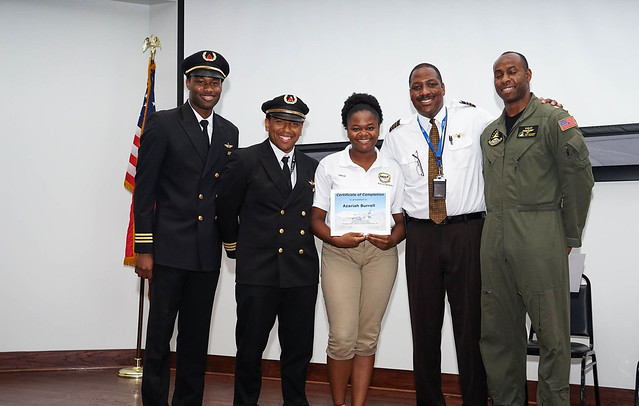