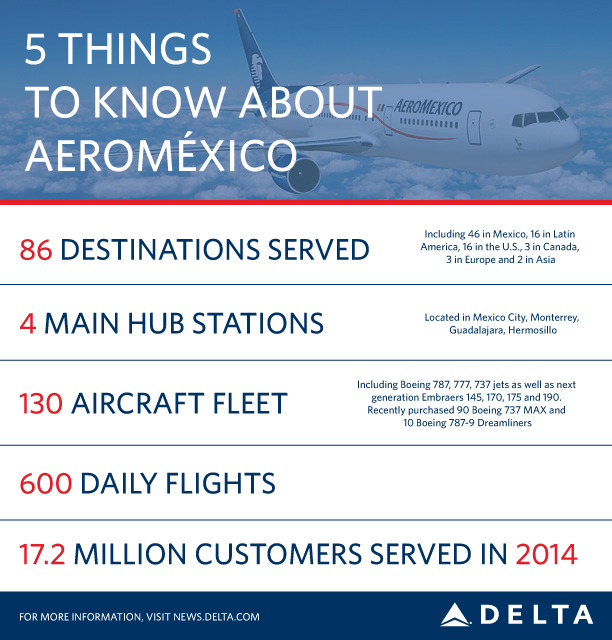 Delta’s intention to acquire up to 49 percent of Aeroméxico, the largest airline in Mexico, is the latest evidence of Delta’s global growth strategy and goal of being the best U.S. airline in Latin America.

“In the past five years we have added 40 percent capacity in the region and we continue to expand mutually beneficial and customer-centric partnerships with Aeroméxico, GOL and Aerolíneas Argentinas,” said Nicolas Ferri, Delta’s Vice President – Latin America and the Caribbean.

The Delta-Aeroméxico move, made public Wednesday, would deepen a 21-year relationship.

The airlines launched their first codeshare in 1994. Delta invested USD$65 million in shares of the parent company of Aeroméxico in 2012. In March 2015, Delta and Aeroméxico filed an application seeking antitrust immunity for a new joint venture on flights between their nations.

Separately, Delta made two announcements in October that will extend the airline’s reach in Latin America and provide partner carriers – and their customers - with more access to U.S. destinations.

Following the launch of a codeshare agreement with Aerolineas Argentinas, Delta now offers service to Montevideo, Uruguay, and to Mendoza and Cordoba in Argentina.

Also, Delta will close 2015 by launching three routes between the U.S. and Latin America. Starting Dec. 19, Delta will offer flights to Medellin and Cartagena from Atlanta, and a daily flight between Sao Paulo and Orlando.

In all, Delta offers more than 1,300 weekly flights between the U.S. and Latin America and the Caribbean, serving 32 countries and 49 destinations in the region.

The strategy of partnering with foreign airlines allows Delta to expand its global network efficiently, offering customers increased choices of destinations and experiences.

Delta President Ed Bastian said of Wednesday’s announcement, “This new investment demonstrates Delta’s confidence in Mexico’s future and deepens our relationship with Aeroméxico, cementing Delta’s long-term commitment to the customers we serve to, from and through Latin America.”

Bastian and other Delta leaders stress that airline alliances must be partnerships among equals.

In an interview earlier this month, Ferri said, “Aeroméxico and GOL are the pre-eminent airlines in their two respective countries. The time and effort we dedicate enables us to share (Delta’s) best practices with them and strengthen them as airlines in Latin America’s competitive marketplace. We tend to learn a large amount from them as well. At Delta, we’ve embarked on “Latinization” or “Somos Delta,” which is a process of changing our products, our service, and frankly our DNA, to make sure we serve the Latin and U.S. customer with a special touch.”

Conesa acknowledged concerns about struggling regional economies in relation to the strong U.S. dollar. A highly valued dollar can hurt travel to the U.S. because it makes a trip more expensive for customers who use a weaker currency.

Conesa praised the industry’s agile response to market conditions. “Airlines are much more nimble in their decisions and are ready to adjust their networks and fleet plans,” Conesa said.

Ferri said Delta is managing the economic cycles in the region to accommodate for demand and growth. “The importance of the region has never been greater and we have had a year of growth in the Caribbean and the beach markets in Mexico,” he said.

Still, the demand for travel is expected to grow.