In honor of Black History Month, Delta is spotlighting stories and achievements of Delta people. The series, "Delta's Very Own Heroes," features employees who have made a mark on the airline's history as African-American aviation pioneers.

At age 2, she insisted on meeting a real pilot. After all, Latasha Coward-Bradbury, a supervising dispatcher in the Operations and Customer Center, was growing up under the flight paths of New York-JFK's impressive show of international aircraft. Aviation was her fascination then; it's been her career path ever since. 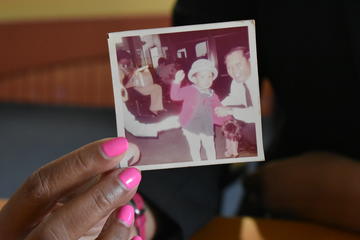 Tasha, being a force to reckon with even at 2, got to meet that pilot, and she still carries the picture to prove it (at right) in her purse, just in case anyone has any doubts about her commitment to the industry.

Being one of the few African-American women aircraft dispatchers in the country, there were always some doubters along Tasha's periphery. Before joining Delta, she overheard her share of "Not a good fit" or "Why does she want to do that?" remarks. She tuned them out.

"You have to let the naysayers motivate you!" says Tasha with a zest that reflects a deep self-confidence and inner strength. "I've always connected to the right people, people who have your best interests in mind. People who have already met your personal goal."

Tasha began her Delta career in Reservation Sales in 2006. Shortly after that, her curiosity and ambition led her to do a job shadow with a Flight Superintendent.

"I watched all of his work. I was fascinated. He said it's the next best thing to being a pilot."

It would take a series of strategic career moves throughout Delta to become FAA-certified and ensconced in Flight Control as a Flight Superintendent, whose role is to exercise the safe and efficient operational control of flights operated by Delta Air Lines in accordance with company and the Federal Aviation Administration's (FAA) regulations and policy. ​Tasha made them with the help of mentors, advisors and a fierce determination to be at the heart of aviation operations. 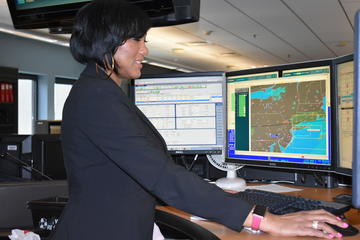 "By chance in a SharePoint class, I met Steve Carter, Special Assignment Supervisor in Flight Control. He told me he used to be a dispatcher and I expressed to him that was my goal. He put me in touch with the right dispatchers to learn even more about the job and he encouraged me to complete my certification. He saw something in me."

"When I first met Tasha, we had a conversation about the OCC, and we talked about dispatchers, what they do each and every day the role they have with the daily operation," said Steve Carter. "Right away, I could tell that was something that sparked her interest. With a little encouragement from me, she did all the rest and became a perfect candidate for Flight Control."

Others see it too, including the pilots depending on Tasha to be their eyes and ears on the ground.

"Hours before a flight, we look at a number of factors such as payload, fuel, maintenance items, weather conditions and the route of the flight. We come up with a flight release that both the pilot and dispatcher signs off on. Once in route, we are continuously monitoring the progress of the flight and communicating any abnormalities with the crew. Also, if the pilot experiences any issues such as mechanical, medical or even unexpected turbulence, we are their first point of contact. Legally, we are jointly responsible for the safety of each flight we dispatch along with the pilot."

Tasha recommends a few key things for those interested in an aircraft dispatching career: Before becoming a FAA licensed aircraft dispatcher, do your research. Sit with a supervisor in an aviation operations center and get to know the room, be able to communicate effectively, and with different groups of people, but mostly bring your passion for aviation with you wherever you go.

"That's just got to be there to guide your way," she says.