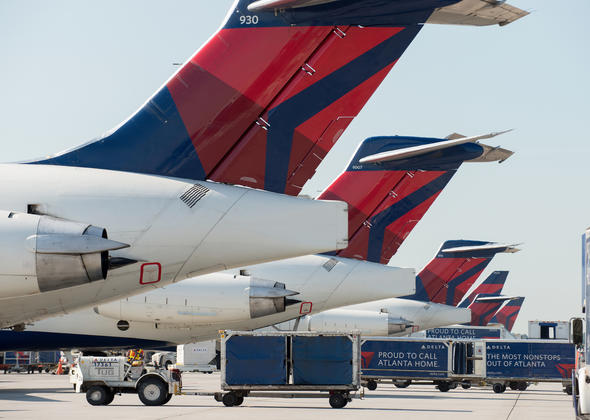 For 241 days last year, Delta didn’t cancel a mainline flight anywhere in the world, beating an industry record it set last year by 80 days. More perspective: the 2016 mark doubled the record the airline set in 2014 and tripled the number of cancel-free days it had in 2013.

For 2016, Delta was a top industry performer among all carriers reporting to the DOT, finishing the year with a 99.6 percent “completion factor” – the percentage of flights completed as scheduled. The company also ended 2016 with an on-time performance of 86.3 percent for its mainline operation and 84.7 percent when the six-carrier Delta Connection regional operation is factored in.1 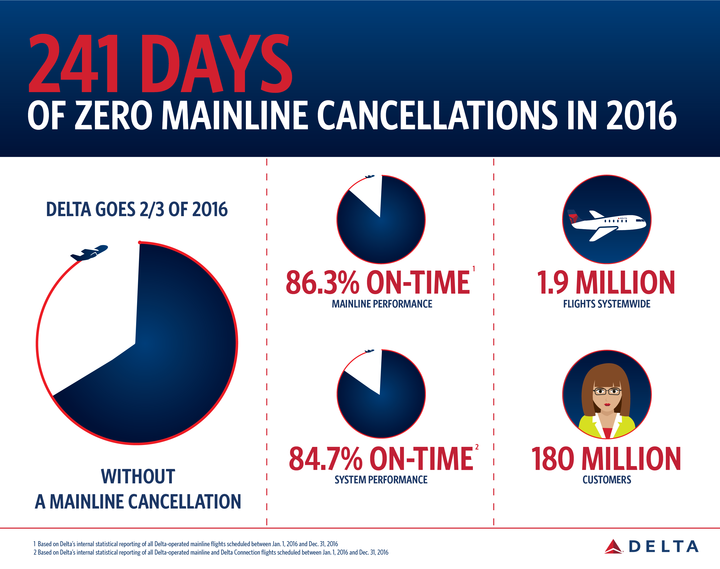 Including Delta Connection, the airline had 81 “Brand Days” in which no flights were cancelled on either the mainline or regional side of the operation, beating last year’s 11—a record at the time.2 Delta and Delta Connection operated a combined 1.9 million mainline flights and carried 180 million customers over the 366-day period.

“Delta people consistently deliver operational reliability far and above our competitors, and it’s absolutely remarkable,” said Gil West, Senior Executive Vice President and Chief Operating Officer. “It’s their immeasurable dedication and craft that means our customers can board a Delta plane and know they’ll arrive at their destination safely and without disruption more than on any other carrier.”

The airline’s strong operational reliability was highlighted in the Official Airline Guide’s 2016 annual performance results report, based on the group’s own reporting.

When cancellations as a result of weather, air traffic control, geopolitical concerns and other factors generally outside of Delta’s control are removed from the equation, the airline’s TechOps professionals accomplished another industry record: 302 days of flying without a single maintenance-related cancellation.1

These strong operational metrics came even as the airline faced setbacks and obstacles, put mildly. In March terrorist attacks at the Brussels National Airport and elsewhere in the Belgian capital killed 32 people and injured hundreds. The attack prompted the suspension of Delta’s Atlanta to Brussels flight. Five months later, in August, Delta’s operation was affected by a technology outage that prompted cancellations and delays across the system, yet the airline still went  21 days that month without a mainline cancellation and had a 10-day streak of 91 percent or better on time performance during one of the busiest travel months of the year.

Hurricane Matthew, one of the strongest to hit Florida and the southern U.S. coastal states, also disrupted flights but there again, Delta surged with high on-time performance and completion factor, thereafter and saw a  31-day streak without a mainline cancellation from Oct. 10 to Nov. 13.

"Delta people consistently deliver operational reliability far and above our competitors ... our customers can board a Delta plane and know they’ll arrive at their destination safely and without disruption more than on any other carrier." - Gil West, COO

[1] Based on Delta’s internal statistical reporting of all Delta-operated mainline flights scheduled between Jan. 1, 2016 and Dec. 31, 2016

[2] Based on Delta’s internal statistical reporting of all Delta mainline and Delta Connection-operated flights scheduled between Jan. 1, 2016 and Dec. 31, 2016.

[3] Based on DOT Air Travel Consumer December 2016 Report statistics through October 2016. Completion factor rate based on domestic mainline flights scheduled and on-time arrival based on domestic flights flown, compared to all carriers reporting to the DOT.