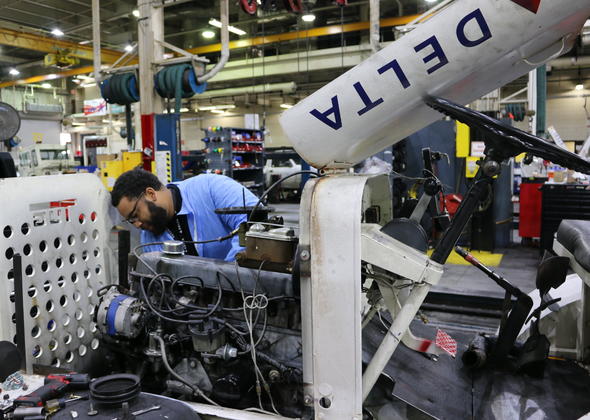 From his office within earshot of pneumatic wrenches and the roar of  departing jets off runway 27R in Atlanta, Curt Brooks, Lead Ground Maintenance Technician, along with his 265 colleagues, work around the clock to keep Delta’s ‘other fleet’ of “Ground Support Equipment” running in tip-top shape. 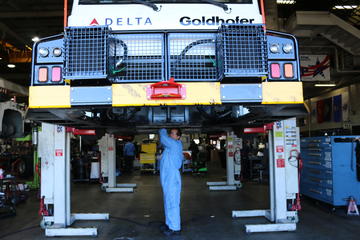 “We’re the backbone to the operation,” said Brooks, a 26-year Delta veteran. “The airplane is the equipment customers see and identify with, but [ground equipment] is the grease, muscle and guts behind the scenes that keep planes, bags and people moving around the airport.”

Delta has a fleet of more than 103,000 pieces of ground equipment (GSE) at airports around the world including everything from bag tugs and belt loaders to jetbridges, air starts and entire airport baggage systems. It’s equipment large and small, complex and simple, and while it plays a less visible role than Delta’s high-flying jets, this ‘other fleet’ represents the vast amount of equipment that makes a safe and reliable global airline operation possible.

And it’s technicians in Atlanta as well as other Delta hubs and stations around the world who operate 24/7 to keep all that equipment – and the airline - moving. They perform preventative maintenance and unscheduled fixes on equipment before sending it back out on the line to help agents load cargo bins, push back aircraft, de-ice frosted jets and sort millions of pieces of luggage a year, among other functions.

Joe Fuqua, General Manager – GSE Management, is a 35-year ground equipment veteran and says keeping an extensive fleet of vehicles and equipment, scattered from Atlanta to Japan and in hard-to-reach destinations like Juneau, Alaska, means he and his colleagues are constantly evaluating operational needs, purchasing new equipment and working to keep existing equipment running smoothly.

“It’s a complex operation as we constantly work to fine-tune the GSE fleet and adjust to network changes and the broader upgauging of Delta’s [aircraft] fleet as well as adhere to local and regional environmental compliance directives,” Fuqua said. “But it’s a challenge Delta people have met and consistently excel at.”

Not so different than airplanes

Similar to Delta’s aircraft fleet strategy, the airline has been successful in finding a balance between new and used ground equipment to support the global operation. The value in a push-back tug, for example, is born largely in the steel structure of the equipment since a significant amount of weight is needed to push—and stop—a several hundred thousand pound aircraft. 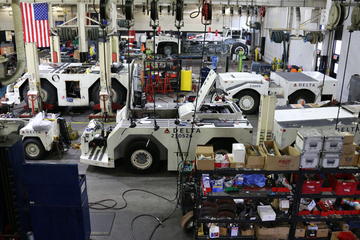 For maintenance planners and technicians, staying on top of preventative and predictive maintenance has meant the successful execution of Delta’s GSE strategy—not unlike Delta’s aircraft maintenance program. On a belt loader, for instance, planners and airport agents carefully monitor usage time and require scheduled inspections every 250 hours—a monthly occurrence in hubs like Atlanta and Minneapolis where utilization is high.

“Preventative maintenance is the backbone of our maintenance program and ensures our customers, namely below-wing agents and aircraft maintenance technicians, have the vehicles and tools they need to perform their jobs effectively,” said Fuqua.

Across the system, detailed inspections mean leaks and faults, as a result of regular wear and tear, are fixed preventatively when possible.

“The better we can do on preventative maintenance, the fewer breakdowns we have in the operation,” he said. “That leads to a safer and more reliable operation for our employees and customers.”

The importance of that reliability is something Max Kling, a Ground Maintenance Technician whose team overseas the baggage system in Atlanta, knows very well. The system last year funneled more than 45 million bags along 35 miles of conveyor belts. It’s the largest airline-run bag system in the world.

“Failure of the bag system isn’t really an option,” Kling said. Multiple built-in redundancies and an emphasis on predictive maintenance keeps bags moving, in some places, at speeds topping 500 feet per minute. Similar systems at Delta hubs in New York, Minneapolis, Detroit and others contributed to the movement of more than 126 customer million bags in 2015.

Delta in recent years began an aggressive push to reduce emissions. Fuqua and his team bought more fuel-efficient equipment and converted a growing number of diesel-powered belt loaders, cargo loaders and other equipment to run on electricity. Now roughly 15,000 pieces of ground equipment are electrically powered. 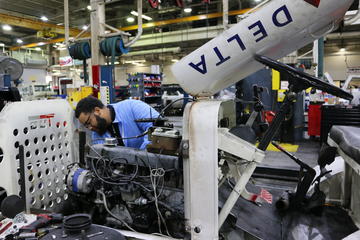 The return is almost immediate: simpler electric motors are less maintenance intensive and drive higher across-the-board reliability; the motors are quieter, cleaner and contribute to improved working conditions for agents.

“There’s a great environmental, reliability and cost benefit to converting existing equipment from dirtier and less-efficient diesel to electricity,” said Fuqua. “We’ll continue to make prudent investments in conversions where it makes sense to do it and to the benefit of the airline and Delta people.”

While much of the department’s focus is built on improving the utilization and reliability of existing equipment, technology enhancements in both aircraft and ground equipment require the team to be nimble and innovative in their approach to equipment fleet strategy. The GSE asset team works to source new equipment while analyzing network requirements—tow bars matched with aircraft type, for example—and moving existing equipment around the system where needed.

When Delta opened seasonal operations in Juneau, the GSE asset team worked to ship tugs, tow bars, belt loaders and other equipment into position in time for the airline’s first arrival into the city, which lacks roads linking it to the rest of the state or neighboring Canada. Newer items are often moved to more remote stations like Honolulu and Anchorage where they will stay for good due to high shipping costs and limited availability of replacement parts.

“It’s a well-coordinated dance to make sure we have the right equipment where the network and operation demands it,” Fuqua said. “With seasonal markets, though it poses a challenge, we’re often able to maneuver equipment from one station to another without having to source and purchase new GSE which is a more sensible use of the airline’s capital.”

Delta also invests annually to purchase new equipment, replacing aging ground equipment to serve new aircraft like the Airbus A350—due to join the fleet in 2017—and for that, the airline works cross-divisionally with TechOps, Airport Customer Service and Cargo to source the right equipment for the job.

“You can’t fuel airplanes, load them with customers, baggage and cargo, de-ice them or push them out of the gate without the help of the equipment assets we acquire and maintain,” said Brooks. “GSE is vitally important to an airline’s operation.”