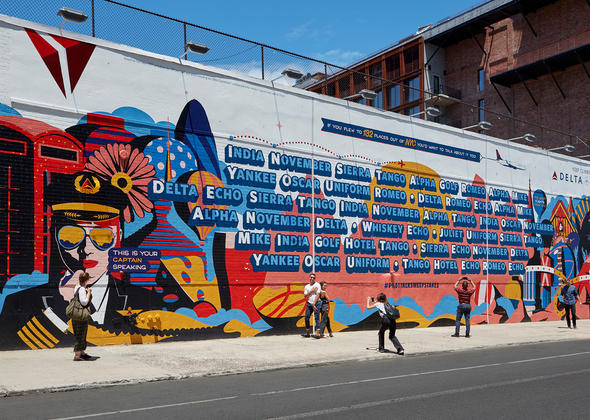 NEW YORK - Delta is taking over Brooklyn again this summer with another selfie-ready wallscape, this time introducing millennial New Yorkers to the phonetic "alpha-bravo-charlie" language that pilots use to clearly communicate critical information in flight.

The airline teamed up with Australian designer Karan Singh to illustrate each of the 26 words that correspond to the letters of the alphabet. The eye-catching execution is designed to remind passersby that Delta flies to more places out of New York City than any other carrier. 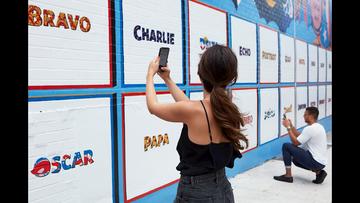 Delta's popular New York wallscapes first made news last year, when the airline created a mural featuring a backdrop of nine iconic destinations and encouraged younger customers to "fake the trip until they can make the trip." And because online dating profiles with travel photos are said to attract more connections, Delta partnered with Tinder to help New York singles snap profile pics that made them look like jet-setters.

"Even die-hard New Yorkers say they need a break from the concrete jungle every now and then, and this summer's artwork will appeal to those who love to discover something new – and share those discoveries on Instagram – while giving a lucky few an opportunity to head out of town," said Julieta McCurry, Delta's Managing Director – U.S. Marketing Communications and Sponsorships. "We're thrilled to build on the success we saw with last year's wallscapes to deliver a new opportunity to engage New Yorkers and connect our customers with the world."

This summer's mural is tied to a contest encouraging customers to spell out their dream destinations using the alphabet, posting images of the letters one-by-one to an Instagram carousel with the hashtag #PilotTalkSweepstakes for a chance to win two roundtrip tickets to that destination. A launch event is planned for Saturday at nearby coffee shop Kinfolk, where complimentary custom beer (ahem, that's bravo-echo-echo-romeo) mugs and coffee cups will be distributed.

With more than 500 daily departures this summer to 132 destinations from New York City's two leading airports, Delta offers customers service to leading business and leisure spots, with new and expanded flights to the Azores, Portugal; Lagos, Nigeria; San Jose, Calif.; Orange County, Calif; Chattanooga, Tenn; and many others. Delta has also increased the number of seats with new Airbus A321 aircraft and renovated Airbus A320s, both of which offer seatback entertainment, on a mix of routes, specifically to destinations across Florida. And the airline has expanded its Delta Shuttle service to Chicago-O'Hare with a 15th peak daily flight with larger mainline Boeing 717 aircraft on the route in premium business time channels. This summer, more than 93 percent of all Delta flights from New York will have First Class seating.

Delta has invested more than $2 billion in New York airport infrastructure over the past seven years and is currently building a new, $3.9 billion, 37-gate facility at LaGuardia. Delta and its more than 10,000 New York-based employees are part of the fabric of the New York community, acting as the official airline of Madison Square Garden, the New York Yankees, the New York Mets, Chelsea Piers and the Whitney Museum of American Art. The airline also partners with more than 40 community organizations. In 2018, Delta paid out more than $110 million in profit sharing to its New York employees and contributed one percent of its net income from the previous year to key charitable organizations, including organizations in New York.