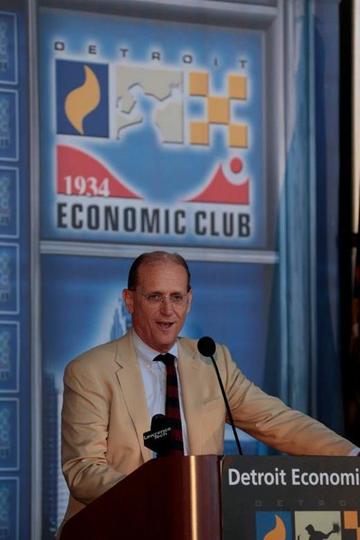 In a speech at Ford Field hosted by the Detroit Economic Club, Anderson outlined why Delta, along with American Airlines and United Airlines, is asking the U.S. government to open consultations with Qatar and United Arab Emirates, which owns Emirates Airline, Etihad Airways and Qatar Airways.

"What we’ve discovered at Delta Air Lines is we compete against a lot of state-owned and state-subsidized enterprises,” Anderson said.  “When the playing field is relatively level, we win because we have these great people that are committed to their company and committed to their customers. But when the playing field is so far tilted, it is difficult in any industry to be able to compete against governments.”

In January, the Partnership for Open & Fair Skies released a white paper showing evidence of Emirates Airline, Etihad Airways and Qatar Airways receiving $42 billion in subsidies from their home governments, in violation of Open Skies agreements.

Every time a U.S. carrier loses an international route to one of these airlines, more than 800 U.S. aviation jobs are lost.

“We support Open Skies; we support open and free trade; but in this instance we have bilateral agreements that are being violated by (Qatar and United Arab Emirates),” Anderson said.

The event came on the heels of the United States Conference of Mayors, which includes 1,400 mayors from across the country, passing a resolution with bipartisan support that calls on the U.S. government to address airline subsidies with Qatar and United Arab Emirates. In May, 262 House members signed a similar bipartisan letter.