A new agreement between Delta and Aerolíneas Argentinas will provide customers from both airlines more travel options to and from the United States and South America. The agreement gives Delta customers access to flights from Buenos Aires’ Ministro Pistarini International Airport to Montevideo, Uruguay, as well as to Mendoza and Cordoba, two important destinations in Argentina.

Likewise, the agreement provides Aerolíneas Argentinas with codesharing on Delta flights to 14 top business destinations in the U.S.

A codeshare is an arrangement in which two airlines share the same flight. Each carrier markets the flight under its own airline designator and flight number as part of its schedule. 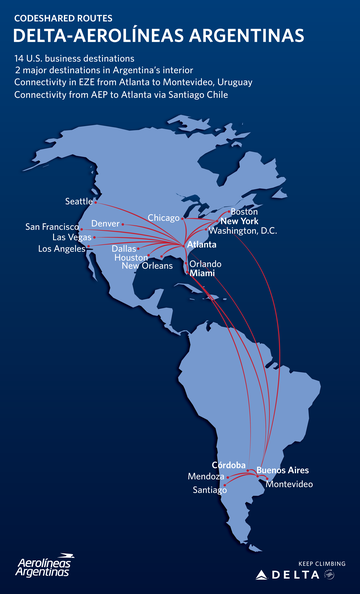 “The codeshare collaboration between Delta and Aerolíneas Argentinas builds on our momentum in the region and reinforces our commitment to being the best U.S. airline in Latin America and the Caribbean,” said Charlie Pappas, Delta’s Vice President-Alliances. “The agreement expands our service offerings to customers traveling to Mendoza, known for its wine industry, and to Cordoba, important for its automotive, aircraft and railway construction business, as well as for the textile, chemical and agribusiness companies it houses.”

Pappas said Delta will also be able to codeshare with Aerolíneas Argentinas on two other important routes, connecting customers from Ezeiza to New York’s John F. Kennedy International Airport and Miami International Airport. “Aerolíneas is an excellent partner and a member of the SkyTeam® global alliance. We look forward to continuing to grow our partnership and to providing our customers with even more connectivity in the future.”

“Aerolíneas Argentinas will also codeshare on Delta daily flights from Buenos Aires to Atlanta, adding a new nonstop route for our passengers traveling to the U.S.,” continued Recalde. “We are delighted by Delta’s decision to join forces with Aerolíneas Argentinas in one of our key markets. It is a pleasure to see that one of the biggest airlines in the world trusts our services for their millions of passengers.”

New connectivity options are added to the existing benefits for members of frequent flyer programs. SkyMiles and Aerolíneas Plus members have the ability to earn and redeem miles on both Delta and Aerolíneas Argentinas flights. Additionally complimentary lounge access, baggage fee waivers, priority check-in and boarding are also offered to SkyTeam Elite Plus members. 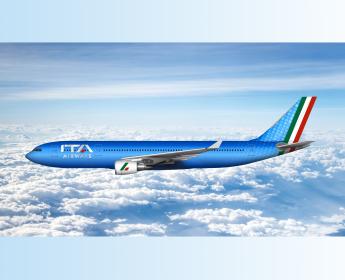