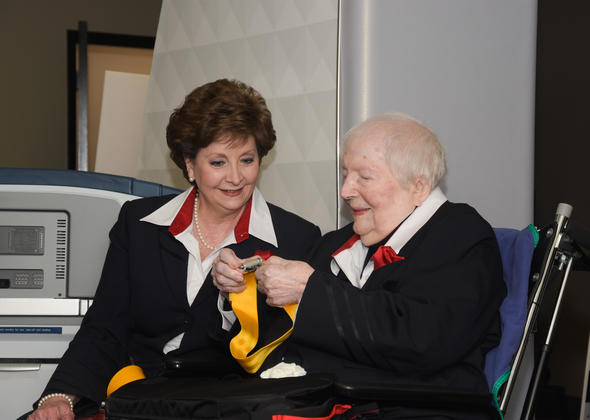 Delta turned 96-year-old Clem Ferguson’s dream into a reality last week when she joined the airline’s new hire flight attendants at the In-Flight Training Center to fulfill her lifelong dream of becoming a flight attendant. 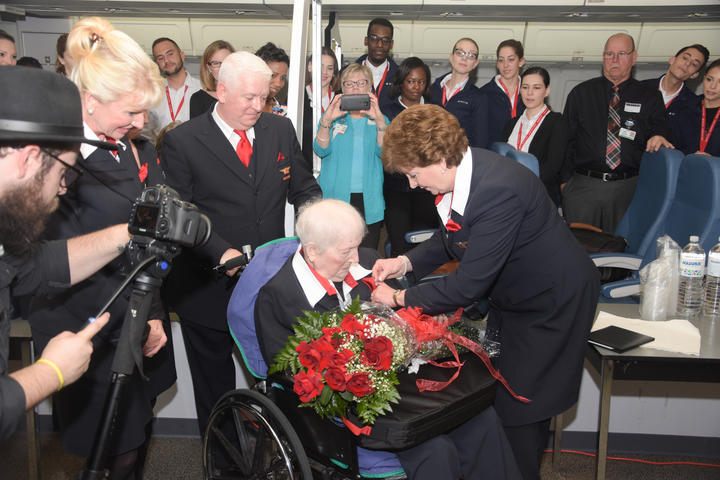 Christian City, a local assisted living home in the Atlanta area, and its partner Second Wind Dreams, a nonprofit organization dedicated to fulfilling dreams for elderly individuals, teamed up with Delta to make Ferguson’s dream come to life.

Through this partnership, Delta allowed Ferguson to “train” alongside its new hire flight attendants, which included observing a ditching in progress, demonstration and use of emergency equipment, and aircraft door operation and evacuation.

“At 96 years young, Ms. Clem added her own touch of glamour to the beverage service, and we especially enjoyed her graciousness and humor,” said Lisa Cryder, Technical Facilitator – In-Flight Service and one of Ferguson’s instructors for the day. “She exemplified ‘Smiles in the Aisles’ during her in-flight training.”

Born in 1919, Ferguson grew up outside Athens, Ga., and as a teenager always dreamed of becoming a flight attendant. Ten years ago, Ferguson came to Christian City Nursing Home and Rehabilitation Center after a fall that left her a paraplegic and unable to walk. However, despite the many challenges she faced throughout her life, Ferguson did not lose sight of her dream.

“Clem’s spirit of optimism and liveliness has helped her to rise above her physical challenges,” said Steven Sheets, Administrator of the Nursing and Rehabilitation Center and member of the Committed to Caring committee. “She has shown her caregivers, friends and family that growing older does not diminish a dream in someone’s heart, even after 80 years.”

After training, Ferguson was named an Honorary Delta flight attendant and received her very own wings.

“I never thought my dream would materialize,” she said. “I had a wonderful day.”

In addition to the new hires, Ferguson was joined by various members of IFS who helped facilitate her experience. 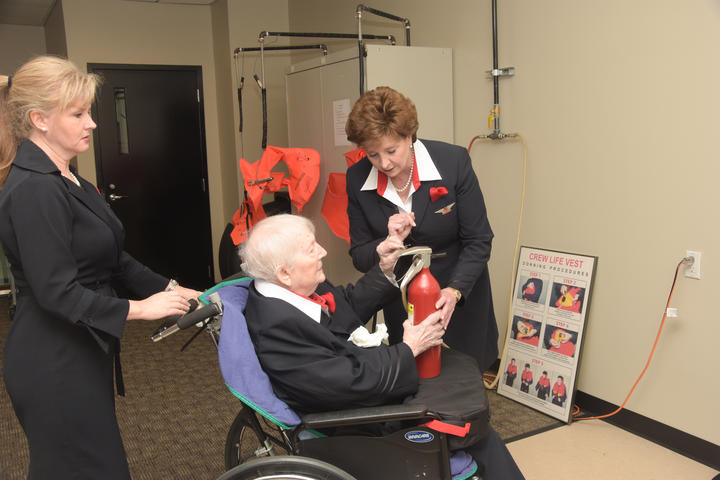 “I’m so proud of our amazing instructor team who helped Ms. Clem earn her honorary flight attendant wings,” said Allison Ausband, Senior Vice President – In-Flight Service. “There were so many people who played a part in making her day a success, and I thank them for showing Ms. Clem what the Delta spirit is all about. Last week we can officially say 110 new hires, plus one very special honorary flight attendant, earned their wings.”

Ferguson was selected for the honor through a Pruitt Health “Committed to Caring” initiative, which helps fulfill the dream of a senior resident at Christian City through Second Wind Dreams. She resides in the Nursing and Rehabilitation Center at Christian City, located nine miles south of Hartsfield-Jackson Atlanta International Airport.

From providing employee volunteer service across Christian City’s campus to hosting Christian City’s 50th anniversary celebration in the Flight Museum last year, Delta and its employees have been longstanding supporters of Christian City for decades.