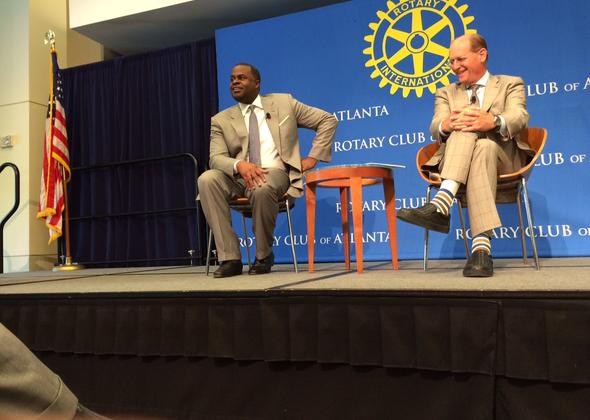 For decades, Hartsfield-Jackson Atlanta International Airport has been a driving force in the region’s prosperity, Atlanta Mayor Kasim Reed said Monday. And Delta Air Lines, which operates its largest hub at Hartsfield-Jackson, is fundamental to the airport’s future the region’s economic well-being, he said.

Reed spoke with Delta CEO Richard Anderson during a meeting of the Atlanta Rotary about the unique partnership between the city and Delta, and how they are working together to ensure that Atlanta remains the world’s leading airport and international gateway.

“Delta is one of those stories that is woven through the tapestry of our city and our community,” Reed said.

Delta and the airport have invested more than $4 billion in recent years in capital projects, including a new international terminal, a fifth runway, airfield improvements and the Central Passenger Terminal Complex.

Anderson sketched out several long-term projects in the works to keep the airport competitive over the next decade. (See link below.) 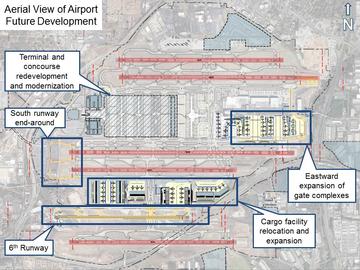 Anderson estimated the plans would take a $10 billion to $15 billion investment during the next decade and beyond.

“The beautiful thing is there are no tax dollars there, it is all a self-funded mechanism at the airport, and we’re committed to plowing that investment back into the facility,” Anderson said. “Fortunately we have a mayor who isn’t just looking out over the next five years, he’s looking ahead 20 years from now.”

In terms of Delta’s service, Anderson said passengers can expect to see Delta continue to expand its Latin American service from Atlanta, noting the airline’s strong partnerships with Aeromexico and Brazilian carrier GOL.

“Our next big opportunity is to make Atlanta the preeminent gateway to Latin America,” he said. He also added that new aircraft technology may help Delta in operating future service between Atlanta and Shanghai.

Reed said that as a leader, he has a responsibility to future generations to safeguard and improve the community’s assets, particularly the airport.

“We have the No. 1 passenger airport on the planet Earth, and we all benefit tremendously from that,” he said. “And we’re committed to keeping it that way.”