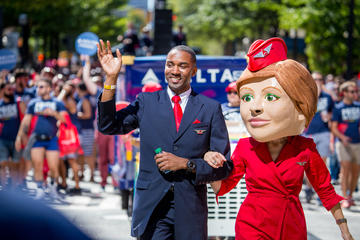 Delta, the exclusive airline partner for the parade, sponsored the VIP Reception at the Georgia Aquarium, a two-day activation at Piedmont Park, and concluded the weekend with a record-breaking Pride Parade.

“In this day and age there is so much hate, bitterness, and fear in the world.  I choose to support Atlanta Pride because I want to be a catalyst for unity and peace,” she said. “As a minority female I know too well the challenges people face because of unconscious bias.  No one person is better than the other and no person should judge another.  It is time for us to celebrate diversity, inclusion, unity, peace, life, liberty and justice for all.” 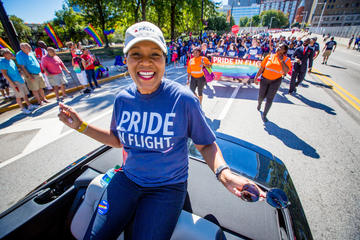 “Pride means so much to so many of us at Delta,” said Michael Long, President of Delta’s Employee Equality Network. “DEEN is the heart of Delta’s LGBT group, and it's incredible to see the members treat Atlanta Pride like a family reunion.  Not only did Delta sponsor record-number Pride celebrations across the U.S., Atlanta Pride had all-time high attendance again this year. This would not have been possible without our partnership with Community Affairs and the support of our leadership.”

Atlanta Pride’s mission is to envision a world where people with widely diverse gender and sexual identities are united, visible and equal. The main purpose of the Atlanta Pride Committee is to advance unity, visibility and self-esteem among gay, bisexual, trangender and queer individuals to promote a positive image in the Atlanta area and throughout the Southeastern U.S.

Delta, a long-time supporter of the LGBT community, celebrated Pride Month this past June as an official airline sponsor of nine Pride festivals across the U.S. and Canada. The Atlanta Pride Parade was the largest single day volunteer project for Community Affairs.