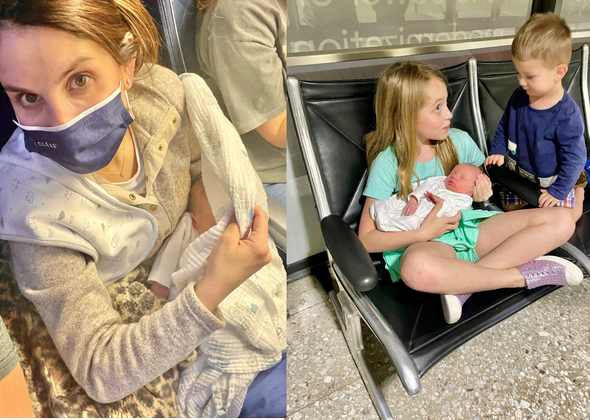 Download
A Delta customer's journey to connect with her newly adopted son becomes even more special as she forges a bond with a customer service agent.
DELTA NEWS ON THE GO. Subscribe and follow.

When Brooke’s phone rang on Christmas Eve with news of the baby boy her family had for so long hoped to adopt, she wasted no time booking the next flight available to Nevada.

Little did Brooke know how unusual her journey of connection would become as she forged a bond with a customer service agent who would become intimately familiar with her story.

Brooke embarked on Christmas morning, her husband staying behind to celebrate Christmas with their two older children.

“I landed in a snowstorm and made it just in time. Our new baby was only 18 hours old,” Brooke recalled.

As Brooke waited for the paperwork to clear so that she could return home, the unthinkable happened: her father, who was visiting for Christmas, had a heart attack. Brooke’s father was ok, but she had to rebook his flight and schedule her own, all while tending to her new baby. Fortunately, Brooke was connected to Tyler, from Delta’s Reservation Sales & Customer Care team.

“In the course of 10 days, I called Delta no less than 10 times. I’m not sure how it happened, but I got the same person every single time,” Brooke said. “Tyler was the sweetest man. By the end of the week, he knew my whole story about our adopted baby and my dad.”

Tyler explained that it wasn’t uncommon for a support representative to talk to the same person twice, but that only happened if the customer called several times in one day. For Tyler to talk to Brooke each time she called over the course of two weeks was nothing short of coincidental. “I’ve been with Delta for 10 years, and I’ve never gotten someone back-to-back to back like that,” Tyler said.

Once Brooke received the green light that the paperwork had cleared, she was able to find a connecting flight for 7 a.m. on New Year’s Eve. Only two hours later, her flight was canceled. She called Delta, and, once again, got Tyler on the phone.

“I talk to a lot of people, so I rarely remember if I talk to the same person twice,” Tyler said. “But Brooke was friendly every single time and really made an impression. People like her help make my job great. She put so much trust in Delta, and we always made it work for her.”

Tyler was able to find Brooke and her baby a flight into a nearby airport. The pair landed at 11:45 p.m. on New Year’s Eve and were greeted by her husband and two kids, wearing New Year’s hats and holding balloons.

The serendipity of consistent connection between Brooke and Tyler would prove to be invaluable during this life-changing moment.

“Tyler played such an active part in everything,” Brooke said. “He understood the urgency and took such a personal interest when I first called on Christmas Eve. I was so excited to share with him that we were green-lighted to go home. When our flight was canceled, he said, ‘We’re going to figure this out.’ I’m sure he thinks his involvement was small, but he played such a big part for us amid complete chaos.”

Although her new baby was the best part of the journey, Brooke was excited to secure something else by New Year’s Eve: her cross-country flight home helped push her to Platinum Medallion Status for the very first time.

“The idea that Delta could play a part in this and connected us to our new son was wonderful,” Brooke said. “I know that our baby will be Delta strong.”