Bastian: 'Be fearless with things that are important' 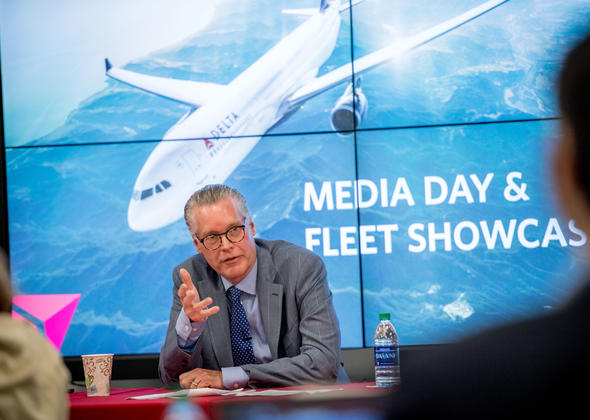 In 2004, Ed Bastian was facing a tough decision. As Delta’s corporate controller, he found himself at a crossroads between his dedication to the airline and its storied culture and his own disagreement with the company’s strategic direction at a time when the airline industry was struggling for its very survival.

He described it as the most pivotal decision in his career.

“The employees had given up so much to keep the company going,” he said. “They had given huge concessions. And the company was squandering it.”

Feeling that his vocal protests were being ignored, Bastian realized he couldn’t just stand by while Delta moved in the wrong direction. “I couldn’t be a part of it,” he said. “It was very hard to do, but I had to follow my heart, so I left.”

He had been at Delta for six years, and considered the company his home and its people his family. “It was the hardest professional decision I’ve ever made,” he said.

As difficult as it was, it turned out to be as short detour in Bastian’s Delta journey.

Six months later, his phone rang. It was Jerry Grinstein, who had just been chosen as Delta’s new CEO. Grinstein was taking the company in a new direction, was committed to restoring Delta’s unique culture, and he wanted Bastian to help lead the team to turn the airline around.

“My heart wanted to come back,” Bastian said, and he agreed to return – taking a significant pay cut.

“I think some people thought I was crazy to leave a good job with a good salary to go back to Delta, which was really struggling,” he said. “But in my heart I knew it was the right thing to do.”

Today, after years of serving Delta during some of its most difficult times, Bastian takes over as Delta’s newest Chief Executive Officer. It is the first time in decades, he notes, that the airline has had an insider elevated to the top job in a smooth transition.

“We decided some time ago that a smooth succession is going to be incredibly important,” he said, and the executive change has been in the planning stages for more than a year before it was announced in February. Along with Bastian, Delta’s Board of Directors named Glen Hauenstein as Delta’s new President and Gil West as Senior Executive Vice President and Chief Operating Officer.

While new to the airline’s top job, Bastian has long been a key figure helping to navigate the airline. His return to Delta in 2004 was the beginning of a voyage that led him to the forefront of a team that engineered one of the most remarkable turnarounds in American business. Initially alongside Grinstein and then Richard Anderson (named CEO in 2007), Bastian helped craft a new business model for Delta that has brought sustained profitability and stability for the airline, financial rewards for its employees, and the industry’s best operation and customer service.

‘You’ve got to be fearless’ 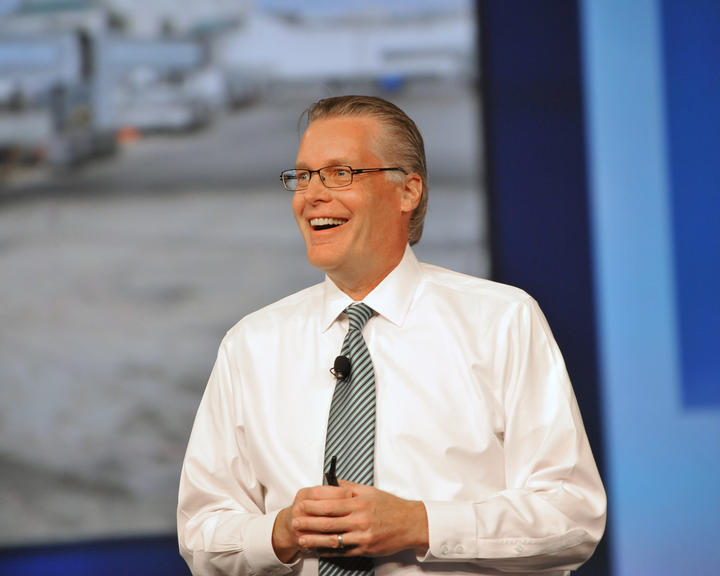 Bastian, 58, grew up in Poughkeepsie, New York, the oldest of nine children. His father was a dentist who ran his practice in the house, and his mother was the dental hygienist.

He had an early passion for baseball, and wanted to be a professional ballplayer. But a proficiency with math led to him study accounting at St. Bonaventure University, a small Franciscan university south of Buffalo, N.Y.

After graduating he joined the Price Waterhouse accounting firm in New York. There he experienced a career-defining moment when, as a young auditor, he uncovered a case of significant financial wrongdoing at an advertising agency that some more experienced partners had missed.

He exposed a massive case of fraud, and the ensuing legal case resulted in some partners at the firm losing their jobs.

“It was a great learning experience, and taught me to trust my instincts,” he said. “I also learned that you’ve got to be fearless with things that are important.”

Bastian rose within the firm, becoming partner at the unusually young age of 32. One notable moment in his Price Waterhouse years was when he appeared on MTV’s Video Music Awards as the accountant in charge of the balloting.

He joined Pepsi, working on international finance for its Frito-Lay snack division. There Bastian learned to navigate the international business world, and the strength of marketing a global brand.

“I was always willing to take a chance and step into places to try something new, even if I wasn’t as qualified on paper,” he said. “I just always had some confidence I could do it.”

By 1998 he arrived at Delta to become corporate controller. At the time the airline industry was flying high, filling airplanes with well-heeled business travelers flush with cash from Internet startups and the red-hot tech economy.

Bastian wasn’t long at Delta before the Internet bubble burst. The tragedy of 9-11 occurred shortly after, and the major airlines went into a tailspin, including Delta.

In addition to the weak travel demand and stuttering economy, the major airlines were dealing with a wave of startup discount carriers, which deeply undercut fares. Even though many of those airlines eventually went out of business, at the time they wreaked tremendous damage on the major airlines, selling seats below cost.

Bastian became increasingly disenchanted with Delta’s business strategy, which combined slash-and-burn cost cutting, much of it directed at employees, with mimicking the low-cost carriers.

“We were following the flavor of the month,” he said. “We were trying to become something we were not – and losing our identity in the process.“We didn’t go bankrupt by making smart decisions,” he continued. “We made a lot of bad decisions.”

Management at the time was sharply opposed to filing for bankruptcy, another position Bastian disagreed with.

“We had to,” he said. “We were doing our employees a real disservice by avoiding those hard decisions.”

Forward to the future 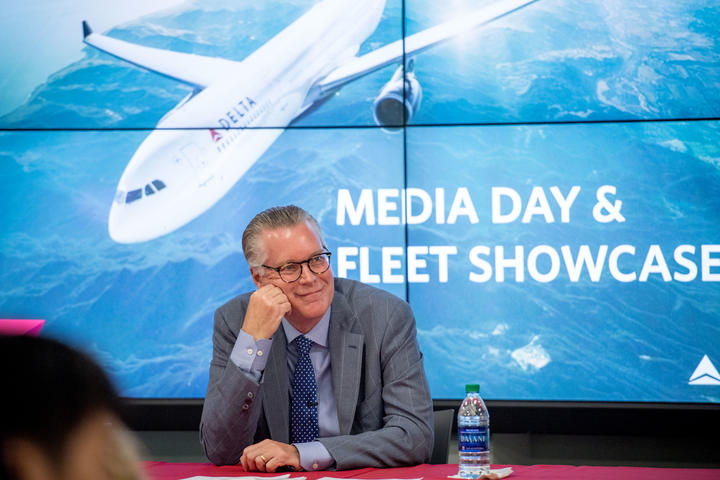 After he returned as Chief Financial Officer, Bastian was tapped to lead the airline’s restructuring. It wasn’t easy, and not everyone believed the airline would survive despite its storied history.

“A lot of people thought we were just going to have to close the doors,” he said. “We were taking it day by day, working to just keep the lights on.”

At one point Bastian flew to New York with a team from finance to make the case to investors that it was worth betting on the future of Delta and its people. He ultimately arranged for $2 billion in financing, keeping the airline alive and setting the stage for its merger and transformation into one of the world’s most successful airlines.

But first, Delta faced a hostile takeover bid by US Airways and its then-CEO Doug Parker – one that many analysts expected US Airways to easily win.

Delta’s employees rallied to keep Delta independent, using the slogan “Keep Delta My Delta” as a call to action to preserve the company’s unique culture. “The strength of the employee voice was absolutely critical,” Bastian told the Wall Street Journal in 2007, labeling the takeover attempt as “77 days of hell.”

As Delta’s top financial officer, Bastian insisted Delta share the rewards of the company’s performance with employees. The result was Delta’s profit-sharing and Shared Rewards plan, as well as base pay increases for employees.

On Valentine’s Day 2008, Delta employees received their first post-bankruptcy profit-sharing checks, which totaled $158 million. Since then the rewards have grown significantly, with a $1.5 billion payout for 2015. Over the past five years, Delta has paid a total of $4.1 billion to employees under its profit-sharing and Shared Rewards program, which is one of the most generous in the nation.

Bastian also saw an opportunity to support Delta people due to a stock payout that was scheduled to go to Grinstein for his time as CEO. Grinstein told Bastian he didn’t want the stock, which was worth about $5 million.

“So Mike Campbell and I asked him if we could take it and use it to start a fund for Delta people who are in need,” Bastian said. The stock helped start the Delta Care Fund, which provides financial support for Delta employees facing sudden crisis. It is funded entirely by Delta employees, and Bastian routinely evangelizes for employees to donate to the Care Fund when speaking with Delta people.

On Sept. 1, 2007, Bastian was promoted to President when Anderson replaced Grinstein, and the two began a lengthy partnership, with Bastian overseeing much of the commercial and international sides of the airline’s business.

As President and a member of Delta’s Board of Directors, Bastian has played a key role in helping craft the airline’s turnaround strategy, including major decisions like the slot swap which created Delta’s successful LaGuardia hub; the purchase of the Trainer refinery to hedge against refining costs; and the move to boost efficiency by reducing Delta’s reliance on small regional jets and upgauge to mainline aircraft. 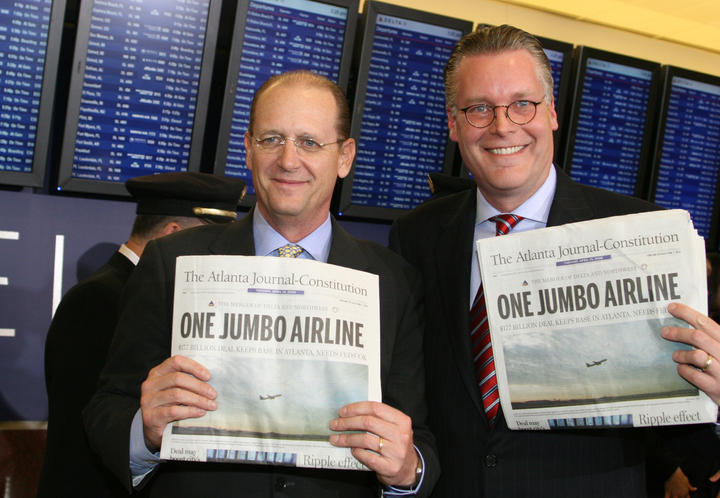 With Richard, he was on the forefront of developing Delta’s unique international partnership strategy, which includes equity investments in airlines like Virgin Atlantic, GOL, China Eastern and Aeromexico. Unlike traditional codesharing alliances, Delta’s equity partnerships result in a high level of cooperation among the airlines to ensure that customers receive the benefits of shared business values and common goals.

The partnerships help Delta offer an industry-leading global network that makes it competitive with any airline, particularly for international business travelers.

Bastian sits on the board of directors of Brazilian airline GOL, Aeromexico and Virgin Atlantic.

After it was announced in February that Bastian would become Delta’s next CEO, he embarked on an ongoing tour to listen to Delta employees, reconnecting with old friends and meeting new ones. He often cites the increasing number of young people in Delta’s ranks who weren’t here during the company’s most difficult times.

“We have a lot of employees who didn’t have to go through that, whose time here has been about profit-sharing and raises,” he said during a recent breakfast meeting with employees in Atlanta. “But those of us who have the scars are never going to forget the bad times, and we’re going to make sure Delta never goes through that again.”

Despite the rigors of the top job, he says he is determined to appreciate the honor of being Delta’s CEO.

“There’s no point in doing this if you’re never going to enjoy it,” he said. Still, he added with a laugh, “sometimes I wake up in a cold sweat and wonder how I got here.”

Bastian takes to heart Delta’s core value of supporting the communities where we live and work. He has been active with a number of community organizations including Habit for Humanity.

In 2014, Bastian successfully completed the New York City Marathon after he committed to Delta’s New York team that he would run the race when Delta became profitable in New York. But he didn’t just show up and run - he partnered with the Rally Foundation to raise $400,000 for the Rally Foundation for Childhood Cancer Research as part of the effort.

“My younger brother was diagnosed with cancer at 15 and was one of the lucky ones,” Bastian wrote in a letter to fundraisers. “Despite a one in 10 prognosis to live, he lost his leg to the disease but not his life. He’s been an inspiration to me and wound up dedicating his life to building prosthetics for victims who have lost a limb.”

Like Anderson Bastian has long been convinced that the key to Delta’s success is its people.

“The Delta people are the very, very best in the industry,” he said “All airlines have many of the same tools, but the one thing they don't have is the magic of the Delta people.”