Delta President Ed Bastian discussed Delta’s role in the community, its people-focused culture and his outlook on the future before a gathering of Atlanta business leaders this morning.

Bastian appeared on a panel with United Distributors President and CEO Doug Hertz at the Junior Achievement of Georgia Partner Breakfast and Speaker Series moderated by Jack Harris, President and CEO of JA of Georgia. Delta Founder C.E. Woolman, who passed away in 1966, “would be very proud to see the business community of Atlanta supporting Junior Achievement,” Bastian said. 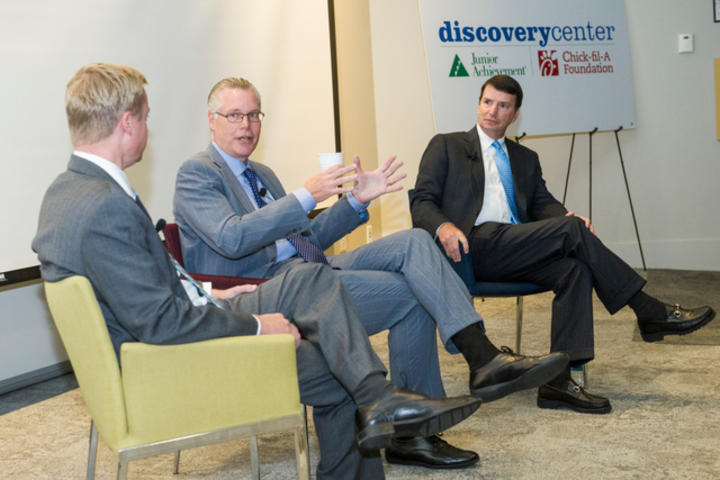 Credit for Delta’s resurgence over the past decade goes to the fact that the company went back to its roots as an employee-driven enterprise, he said.  “That was Mr. Woolman’s legacy,” he said. “Our heritage is that our people set us apart from our competitors.”

That focus on empowering employees and sharing Delta’s success was the reason behind the recent 14.5 percent raises, as well as the company’s profit-sharing plan, which paid out more than $1 billion last year. “It’s a tribute to the success they have had,” he said.

Bastian said he was bullish on Delta’s future. Travel demand in the U.S. remains strong, despite some weakness in international markets, he said. Savings from lower jet fuel prices have enabled Delta to re-invest in the customer experience and operational performance, which has been hitting record levels.

“The quality of our service has never been better,” he said.

When asked about what drives performance, Bastian said he doesn’t believe there is a single key to success.

“I think it’s about finding passion in what you do and letting that rub off on those around you,” he said. “And that’s so evident at Delta, where people are so passionate about what they do.”