Delta President Ed Bastian's first public appearance as incoming CEO took place last night in Los Angeles when he spoke to members of the Los Angeles Area Chamber of Commerce, where Delta was the presenting sponsor at their inaugural dinner. 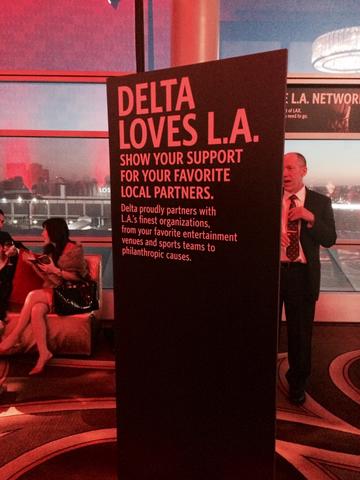 L.A. City Council President Herb Wesson introduced Bastian, who took the stage to outline Delta’s efforts to earn the position as L.A.’s preferred carrier. He pointed out the airline’s network growth and facility investments in the key global gateway over the past several years.

“It wasn’t long ago that Delta was a minor player in Los Angeles, but we embarked on an expansion to better serve our LA customers, and…earn your business and your loyalty,” he told the audience of 1,600 members of L.A.’s business community.

Bastian also pointed to Delta’s footprint beyond the airport, thanks to partnerships with key community organizations and beloved L.A. brands like the Lakers and the Kings. Earlier this week, Delta extended its partnership with AEG, and on Monday the airline will return for a ninth year as the Official Airline Partner of the 58th GRAMMY Awards.

“I cannot overstate how excited we are about what’s going on in L.A.,” Bastian said. “Delta is helping to build a better L.A., and it’s a goal we take very seriously.”