Ed Bastian took time to talk with Delta News Hub about his new role as Delta’s CEO, his views on leadership, and what employees and customers can expect with him in the airline's top spot.

DNH: You have been at Delta for a long time, through tough times as well as recent successes. How does it feel to be taking the top job after everything you have been through? 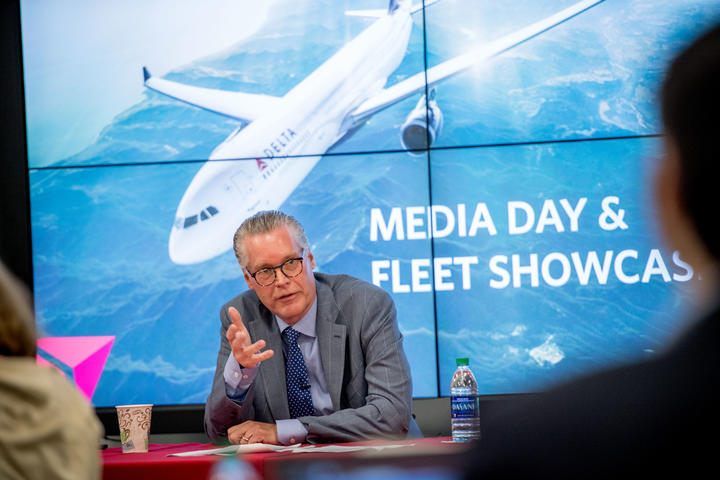 Bastian: It feels incredibly rewarding, because it’s recognition of the hard work of the entire Delta family who I’ve made this journey with. I feel fortunate and humbled to have the chance to continue the journey forward with them. When I came back to the company in 2005 we were at our absolute darkest days. That was pretty frightening. We weren’t quite certain we were going to make it – in fact, a lot of people were counting us out. But the opportunity was there to rally the team, to rally the Delta culture and to put the structure and the tools in place to make our people successful. It was that combination that was the secret sauce that allowed us to turn things around.

Richard played a massive role through his leadership, but he would be the first to tell you that the entire team played a very important role. Whenever I talk about those times I let everyone know that I continue to wear those scars, and I don’t want to forget. I won’t ever forget. I remember what it took to get this thing turned around, and I will never let this company get into that kind of jeopardy again.

DNH: How would you describe your leadership style?

Bastian: I’d say collaborative. I like to listen. We’ve got a lot of smart people around the company, and I like to learn from them. I consider myself a learner. At the same time I also like to get decisions taken quickly. I’ve learned that you can’t study a decision too long before you make it.

I always want to make sure I hear what is going on. This is a massive enterprise, we’ve got a lot of important moving pieces that interact one with the next. Getting feedback, getting all the points of view that are on the table, but then acting decisively and quickly, moving with speed; that’s what you’re going to see our leadership continue to do.

DNH: As you sit here today, what do you see as the top priority for Delta?

Bastian:  The most important thing we can do right now is to support the Delta people in every way possible. It’s the Delta people who have led the turnaround. Candidly Richard and Glen (Hauenstein, Delta's new President) and I and the rest of the executive leadership have gotten way too much credit for the success of the company. The success really does belong to the people of this company. Making certain that our people know that we’re behind them, and that the tools, the technology, the product are in place to support them are critical. I am thrilled and really looking forward to next Friday, Profit Sharing Day. There’s no airline in the world that has ever given a 21 percent check to every member of the family. I doubt many companies period have ever done that. It’s really heartwarming to know that those sacrifices and hard work are being rewarded in that fashion. I love hearing stories of how our people are going to spend their money.

DNH: Can Delta employees and customers expect anything to change under your leadership?

Bastian: Over time there will be changes. I think the changes will be driven by our continued opportunities to invest in our business. You will see us taking advantage of international opportunities. It’s a big part of what I’ve been working on for the past five years, and I think that’s going to continue to grow for us. You’ll see us continue to raise the bar operationally. While we’ve broken records on a regular basis, we’re not done. And we’re not resting on our laurels. We remain hungry, and we want to improve our scores across the board. Our customer scores are good, but we’re not satisfied with them. Our employee morale is strong, but we want to maintain it and grow it further. And we want to continue our strong financial performance for our owners. So I think you’re going to see a continued drive for excellence led by a very competitive team. We are a team that likes to win. It’s a team that supports each other, and a team that makes sure we are always giving thanks and recognition to our employees for making it happen.

DNH: You’ve had the opportunity to work alongside Jerry Grinstein and Richard Anderson. What lessons did you learn from them that will serve you as you become CEO? 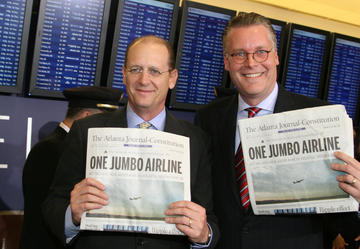 Bastian: Jerry and Richard are two phenomenal leaders and I learned a lot from both of them. I learned from Jerry the absolute focus on the people and putting people first. That’s something he did when he came back to rescue the company, he put people first. In fact, one of the first calls I made once I got the word about the announcement was to Jerry. I thanked him, and I talked to Lyn, his wife as well and thanked her. They had a big impact on me, and I wouldn’t be here today if it wasn’t for Jerry. There is no question about that.

Richard is a friend; he’s a brother. I’ve lived with him, I’ve spent more time with Richard than his wife, unfortunately. But it’s been good, we have a bond together. You have that bond any time you’ve gone through a battle together, because that’s what it’s been it’s been, a battle to get this company to where it’s at today. A lot of people tried to knock us off – takeover attempts, financial hedge funds, foreign government-owned subsidized carriers trying to take our markets –we’ve run the gamut of people who have come after us. We’ve been very fortunate and blessed to come out ahead on those battles, but there are going to be more wars to fight and Richard has got the team prepared to go in.

DNH: What keeps you up at night?

Bastian: I sleep really well, I really do. We’ve got the greatest people, the strongest leadership team, the best people in the operation that take great care of our customers. As long as I make certain that I give them what they need and stay out of their way and have their back, we are going to be a success.

Richard and Glen and I and the rest of the executive leadership have gotten way too much credit for the success of the company. The success really does belong to the people of this company.

Note: This article was initially posted on Feb. 4, 2016, after Bastian's appointment as CEO was first announced.