Best of the Best: Chairman’s Club honorees celebrated for embodying spirit of Delta

An elite class of colleagues hailing from Delta stations across the U.S. and world enjoyed an unforgettable evening of recognition at the 23rd annual Chairman's Club Gala in Atlanta.

Out of Delta's more than 80,000 employees in 60 countries, the special 100 were celebrated, encouraged and, ultimately, inducted into the company's prestigious Chairman's Club Thursday — a testament to their service, dedication and all-around embodiment of "the spirit of Delta." 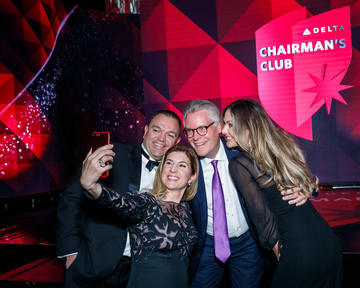 "It's your power, your spirit, your perseverance that makes Delta great and it's our turn to really thank you and celebrate you," Delta CEO Ed Bastian said at the Gala. "That's what ​tonight's about, recognizing the men and women who are the giants in ​our company who are going to be building Delta for generations to come."

Before entering the Gala Thursday evening, the honorees were escorted by police down I-75 to the Delta Flight Museum where they were met by ecstatic colleagues, family and friends as they walked the Hollywood-style red carpet.

"I've smiled more today than I think I have in my entire career. I really love this company," said honoree Korrine Roth, Salt Lake City – Reservations, minutes after coming off the red carpet.

From curbside to the cockpit, this year's honorees have between four and 46 years of service and represent 26 stations across the world. They made it through an incredibly competitive nomination period that garnered more than 5,000 submissions from peers. This was followed by an extensive review process that lasted several weeks, culminating with the selection of 2019's 100 honorees.

Honoree Michael Williams received the unforgettable news during a challenging period and said he will cherish his induction for the rest of his life.

"I'd been going through cancer treatment and the same day I was considered cancer-free I also received the news I'd been selected to become an honoree. I'll never forget that day," said Williams, International – ACS & Cargo (Atlanta).

Seated under the wing of the "Spirit of Delta" aircraft, honorees dined and mingled with senior leaders as excerpts of nominations from their peers graced the screen, along with honoree videos expressing their love for Delta's special culture.

Masters of ceremonies Sandy Gordon, Senior Vice President – Airport Operations (Domestic) and Ranjan Goswami, Vice President – In-Flight Service, kept everyone entertained throughout the evening, commending the honorees for their work ethic, community service, care for customers and colleagues and exemplification of the Delta Difference. There was also a standing ovation for Delta's 12,000-plus veterans —16 attended the gala.

In true Delta fashion, honorees were called in "zones" to the stage to receive words of appreciation from senior leaders for their exceptional work and accept their 10-carat gold Chairman's Club lapel pin — making their induction into Delta's elite club official.