Big Game weekend: Here’s what to expect in the forecast and Delta’s operation 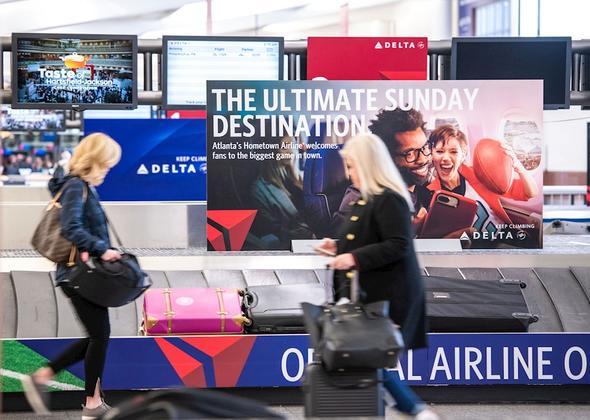 As fans continue to make their way to Atlanta's Hartsfield-Jackson for the Big Game, Delta's team of meteorologists forecast stable weather conditions for the city.

Even with high customer volume and inclement weather in Atlanta this week, Delta people across the system worked diligently to maintain a strong operational performance into Hartsfield-Jackson, netting a 97.58 percent completion factor rate across the combined mainline and Delta Connection system for the last six days. Similarly, the airline has maintained an on-time arrivals rate of 88.91 percent of flights arriving within 14 minutes, the Department of Transportation's definition of on-time.

Delta is the Official Airline of the Super Bowl Host Committee, and upon arrival, will take passengers on a branded journey through football-themed jet bridges, into gate areas, past passenger assistance carts, and out to baggage claim.

While Delta has been operating with increased staffing for the days around the Big Game, it has also deployed more than 370 employees from its own volunteer workforce, Peach Corps, inside the airport to help customers with wayfinding, questions, meet-and-greet and care while waiting. Following the game, the Peach Corps teams will begin a 28-hour continuous operation supporting the airport's expected migration of fans leaving downtown to overnight in the airport prior to Monday morning's first flights.

For those planning to watch the game elsewhere, the airline's Operations and Customer Center are keeping an eye on two weather systems as they move across the Midwest and western United States bringing rain and snow into the regions on Sunday and Monday.

Delta proactively issued a weather waiver for customers traveling through Minneapolis/St. Paul ahead of the snowstorm forecasted for Monday. The airline's team of meteorologists anticipate mixed precipitation early Sunday, transitioning into light snowfall of up to two inches of accumulation Monday morning. Customers can expect de-icing operations at the airport as a result.

As always, customers are encouraged to check their flight status on Delta.com or the Fly Delta Mobile App. Customers can also get updates sent directly to their mobile device or by email with One-Time Flight Notification.