And, not just any branding. Delta has permanently parked itself at the Braves’ new home by transporting a 25-foot tail from Delta Ship 624, a retired Boeing 757-200 aircraft, to SunTrust Park where it will be a prominent landing spot for fans. The tail sculpture was the brainchild of Delta’s Lead Project Manager-Brand Design Adam Pinsley, the man behind the distinctive Delta branding in other hospitality venues across key markets.

With the help of Delta TechOps and multiple other departments, the tail migrated from desert storage in Marana, Arizona, to hangar bay 12 in Atlanta where it was transformed over five months. On March 4 it was re-positioned to its new permanent home at Atlanta Braves’ new SunTrust Park. 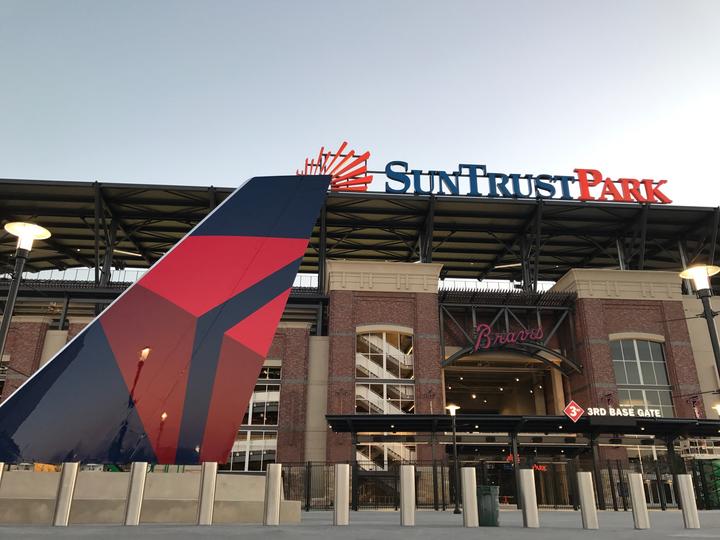 Delta branding and fan experiences are infused elsewhere in SunTrust, including a 13-foot-tall Delta widget and “DELTA” letters positioned atop the left field scoreboard. Delta will also open a 15,000 square-foot Delta SKY360° Club, a premium club space for fans behind home plate with an all-inclusive menu, multiple bars and exclusive views of post-game press conferences.   Other Delta elements at the ballpark include the Delta Parking Deck, a 878-space premium parking structure near the third base gate, and a private bunker suite.

On March 27, just a week before Opening Day, Delta will launch “Braves First Class,” a month-long program for fans designed to celebrate Atlanta Braves “firsts” that happen in the new stadium.  Fans who sign up can win prizes based on team ‘firsts’ at SunTrust Park.  Braves shortstop and Atlanta native Dansby Swanson will serve as the program’s ambassador, with a variety of engaging content for digital and social channels. Contest categories include:

Fans can register for Braves First Class at www.braves.com/firstclass.