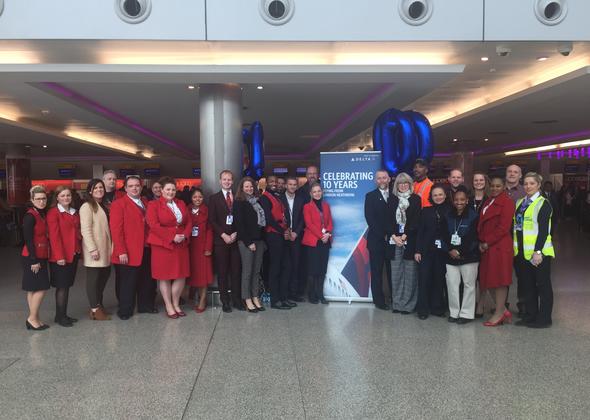 Delta is celebrating 10 years of operations at London Heathrow - the U.K.’s busiest airport. The airline has grown from three flights a day in 2008 – one to Atlanta and two to New York-JFK – to nine daily flights to seven cities. Meanwhile, it has transformed the products and services on offer to become a key player in the competitive London-U.S. travel market.

The 10-year anniversary comes in the same week as the launch of Delta’s A330-200 from Heathrow. The aircraft now operates on flights to New York-JFK and Atlanta, plus select services to Detroit, offering an enhanced onboard experience for customers in every cabin.

“Access to Heathrow enabled Delta to compete more effectively in the U.K.-U.S. travel sphere, the busiest in the world,” said Paul Buckley, general manager of Airport Customer Service – Europe, Middle East, Africa and India. “Today we offer a broad network and innovative products such as free in-flight messaging and RFID bag tracking that no other U.S. airline can match on the trans-Atlantic.”

Delta’s access to Heathrow, the preferred London airport for business travelers, came about through the European Open Skies Agreement that went into effect on March 30, 2008. Until Open Skies, Heathrow was restricted to two U.S. carriers, American and United, and two from the U.K., British Airways and Virgin Atlantic. Other carriers including Delta, Northwest and Continental were confined to the city’s secondary airport, Gatwick.

10 things to know about Delta’s decade at Heathrow: