A celebration fit for a king: Delta flies WWII hero to royal recognition in Belgium

Seventy-five years ago, a young Pastor Matthew Southall Brown serving in the U.S. Army helped liberate the Netherlands and Belgium from Nazi occupation. This week, the 97-year-old World War II veteran is being recognized for his service and heroism by King Willem-Alexander of the Netherlands and King Philippe of Belgium — and Delta was honored to escort him on his voyage back across the pond. 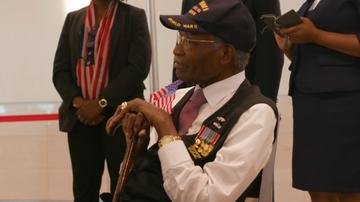 In partnership with Honor Flight South Florida, Delta hosted a surprise sendoff celebration for Pastor Brown on Wednesday at the Hartsfield-Jackson Atlanta International Airport, attended by representatives from the airport, Transportation Security Administration, the City of Atlanta and fellow travelers.

"Pastor Brown's life is an example of serving his country, serving his community and serving others," said Matt Sparks, V.P. — Atlanta Airport Operations to the crowd of customers and guests. "It is an honor to be a part of his journey."

"Words are inadequate for me to tell you what I feel now," said Pastor Brown during the event. "I have never been celebrated like this."

After boarding the plane for his flight to Belgium, Delta's Honor Guard conducted a pre-departure ceremony, while the airport saluted Pastor Brown with a traditional water cannon.

In 1943, Pastor Brown was drafted at the early age of 18 as a rifleman. He was one of 2,000 black soldiers who fought side by side with white soldiers in an otherwise segregated Army.

"No night is ever too dark, no day has ever been too long for me to assist not only people of color, but people of the world," said Pastor Brown.

Along with Pastor Brown's dedicated service in WWII, his father served in WWI, his son served in Vietnam and his grandson served in Afghanistan. Delta people were honored to take part in such a special occasion for a true hero. ​