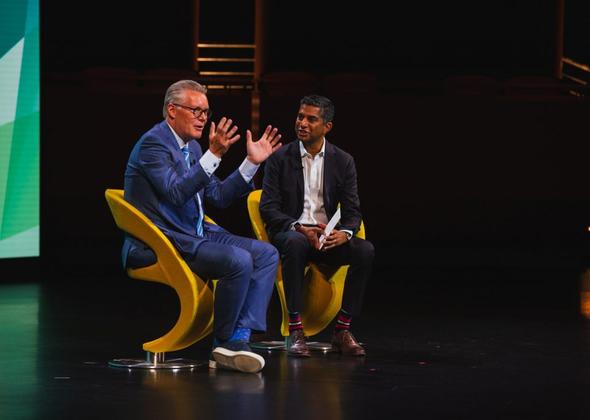 CEO Ed Bastian highlighted Delta's investments in the customer experience, provided an update on WiFi and discussed our commitment to sustainability during a keynote Q&A at the Skift Global Forum in New York Wednesday.

"It's a challenge, but it's as clear as ever that our customers expect WiFi to be fast, reliable and at the same price point in the airline as it is on the ground, and that's free," he said. He added that the technical challenges are substantial and it will take time to implement. "But we'll get there," he said.

Ed announced Delta's ambition to be the first U.S. global carrier with free wireless internet at the Skift forum a year ago.

He also explained how Delta is working towards being seen as a trusted global brand, with air travel becoming part of the modern lifestyle. "We're impacting people's lives in more ways than people would have thought possible" just a few years ago, he said, noting that the price of traveling has declined by 40 percent over the past 25 years.

Delta's investments in new aircraft, airport improvements and technology is winning new customers, he said, and helping cement our lead in the travel business. Ed noted that Delta is the first airline in history to be invited to keynote at the Consumer Electronics Show next year. "We're going to talk about what technology means for the consumer, and what we're doing to make the travel experience less stressful and more enjoyable," he said.

Just as important as enhancing and improving the customer experience is Delta's commitment to sustainability, Ed said, pointing out that Delta's carbon footprint hasn't increased since 2012, and we're working toward reducing our carbon footprint by 50 percent in coming years.

"It's important that we consider our impact on the planet," he said. "It's the right thing to do, and it's also the smart thing to do since our customers today want to be loyal to brands that share their values."

Ed also discussed the importance of Delta's trans-Atlantic network and our partnership with Virgin Atlantic at an event at BritishAmerican Business, alongside Virgin CEO Shai Weiss.

The U.S.-U.K. marketplace is the most important travel market in the world, Ed said, and pointed out that Delta today has a significant presence at London-Heathrow airport thanks in part to our partnership with Virgin.

"It wasn't that long ago that we were completely locked out of Heathrow," Ed said. "Today Delta is a major player there."

He also stressed that while Delta's investments in service and partnerships are important, our culture and people remain the key to success.

"The Delta people truly are the only thing that separates one airline from the other," he said. "And that's because we believe we have a higher calling, to bring the world together and make those connections. That's why Delta people are the best in the world."