How does one go from investment banking to environmental activism? Mark Tercek, president and CEO of The Nature Conservancy, explains what made him do a 180 in his career and how he’s using his business know-how to convince others environmentalism is good for the planet and the economy, in this month’s Sky magazine. 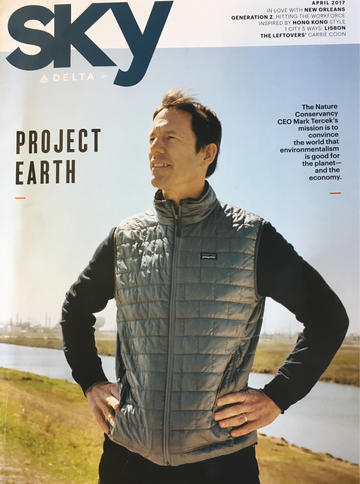 Tercek isn’t a scientist, yet he discovered the worlds of business and conservation aren’t so different. His interest in the environment was spurred after becoming a father and taking his children on a number of nature-orientated trips. In the years following, he left his 24-year career at Goldman Sachs to lead the world’s largest nonprofit environmental organization, where he works to convince governments and corporations that the environment is worth investing in.

“We’re not asking a government or corporation to be philanthropic, but we are asking them to be a little more long-term in their thinking and wiser in terms of incorporating the full range of alternatives,” Tercek told Sky.

Like Tercek, Delta is also focused on leaving the world a better place for future generations, Delta’s CEO Ed Bastian wrote in his monthly letter in Sky.

“Our people have spent years finding strategies to reduce our emissions and promote sustainability practices across our operation,” he wrote. “Being a good corporate citizen means being a good steward of the environment and a positive force in the community, in addition to being a great place to work and fly.”

Bastian detailed those sustainability practices, which include aligning with the goals of the International Air Transport Association to reduce net aviation carbon emissions by 50 percent by 2050, and retiring older aircraft from its fleet and replacing them with more fuel efficient ones, among other initiatives.