NEW YORK - A power outage in Terminal C at LaGuardia Airport this morning caused delays and cancellations for Delta customers. Delta worked with the Port Authority of New York & New Jersey to get back-up generators up and running earlier this morning.

Teams continue their efforts to restore to full power, which is estimated to resume overnight. Delta expected essentially normal operations by 8 p.m. 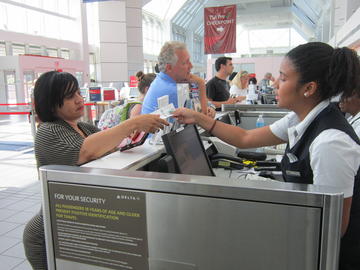 Some portions of the terminal still do not have power for elements such as air conditioning, escalators and moving walkways and concessions. However, all other systems are up and running and the terminal is operating.

Approximately 168 Delta mainline and Delta connection flights have been canceled today at LGA. While Delta anticipates a relatively quick recovery now that power has been restored, customers are still encouraged to check the status of their flights using the Fly Delta app or delta.com before heading to the airport.

Delta customers ticketed for travel July 24 and 25 at all  five New York City-area airports Delta serves (LaGuardia, JFK, Newark Liberty, Stewart-Newburgh and White Plains) can make changes to their itineraries without change fees through July 28. Customers can go to delta.com or use the Fly Delta app to find flight alternatives.

Working closely with the Port Authority, Delta people across the airport and in divisions throughout the company rallied together to restore power to Terminal C and assist customers. Carts provided snacks and beverages to customers in the terminal, while Delta people systemwide worked diligently to assist customers and get Delta’s normal operations back up and running, the company said.

According to the Port Authority, the power outage occurred at approximately 4:30 a.m. as a result of ongoing construction by Port Authority contractors.

Delta operates a major hub at LGA, with about 275 daily departures from Terminals A, C and D.