An inspiring pediatric patient from each state boarded a Delta flight recently to kick off the first leg of the Ambassador Tour for Children's Miracle Network Hospitals. During the tour, 53 “Champions” and their families will share how they were affected by donations to the organization and advocate for vital funds to provide the best care for kids.

As part of the kick off, the group gathered at the Delta Flight Museum to thank Delta employees for their continued support of Children’s Miracle Network Hospitals. The children were welcomed to the museum by a roaring applause from Delta employees and leaders.

“On behalf of Delta Air Lines we thank you for this wonderful partnership that we’ve had over the past 17 years,” he said. “Our employees worldwide are committed to raising funds for Children’s Miracle Network Hospitals, raising a dollar a time in their own local stations and creating fundraising competitions. You all inspire all of us here at Delta for your fighting spirit – we talk about Delta giving back, but it’s really about us receiving from you all.”

As the National Goodwill Ambassadors for Children's Miracle Network Hospitals, Miss America 2015 Kira Kazantsev and actress Zendaya Coleman, from Disney’s “K.C. Undercover,” accompanied the Champions and spent the day taking photos and getting to know the ambassadors. John Lauck, President and CEO of Children’s Miracle Network Hospitals, was present to thank Delta for its commitment to the organization with a video featuring the Champions. 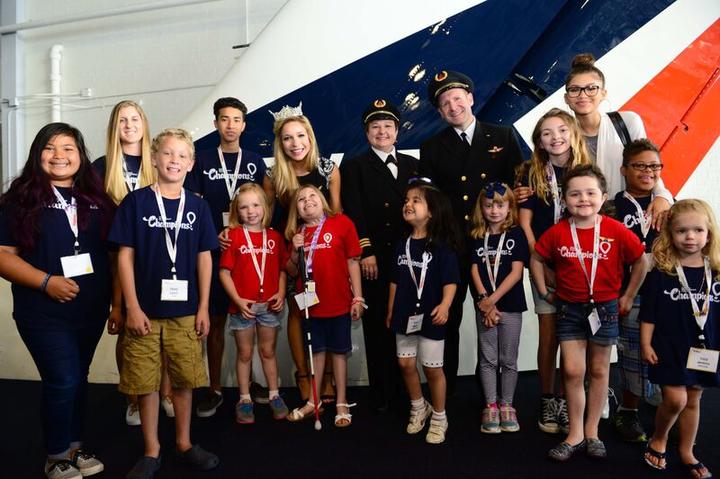 “We’re so grateful for our partners here at Delta,” Lauck said. “Since 1998, they have been a marvelous partner benefiting our 170 hospitals and making possible the many miracles that allow Champion families like yours able to share your story.”

Following the event at the museum, a private Delta-chartered flight transported the group to Washington, D.C. While at the nation’s capital, Champions will meet with local representatives on Capitol Hill, participate in a satellite media tour and continue to raise awareness for the charitable needs of children’s hospitals. Greg, along with other Delta leaders and employees, accompanied the ambassadors and their families on the flight.

“As a parent with a son with Cerebral Palsy it is very close to my heart what these families deal with,” said Delta Capt. Jeffrey W., who attended the recent event. “I had an absolutely amazing time interacting with the Champions and their families. It is a great feeling being able to get these kids to smile even if it is only for a very short period.”

The 2015-2016 Champions will reunite in February 2016 for the final leg of their Ambassador Tour. This will take place in Orlando, Fla., at Children's Miracle Network Hospitals’ annual Momentum event where the charity’s 170 hospital partners gather with corporate and media partners. Through additional speaking engagements, appearances and media interviews, the Champions will complete their year of service by thanking and inspiring those who support the children’s hospitals they depend on.

Delta has partnered with the Children’s Miracle Network for the past several years, including the sponsorship of the organization for the Champion’s Weekend program. In addition to cash sponsorship, the airline supports the non-profit offering charter flights and tickets for the Champions and their families, hosting golf tournaments and allowing customers to donate SkyMiles to Children’s Miracle Network through SkyWish.