Human trafficking. It’s a topic many don’t want to talk about, but for Delta, talking is the first step in solving the problem. In a recent segment on CNN’s “Business Traveller” Delta’s Senior Vice President – In-Flight Service, Allison Ausband, talked with reporter Richard Quest about the airline’s focus on the issue and its strategy to stop traffickers in their tracks.

“Our CEO and his wife are passionate about ending human trafficking. It’s a dark topic. It’s something that not everyone wants to get engaged in,” said Ausband, who is leading the airline’s program to end human trafficking, #GetOnBoard. 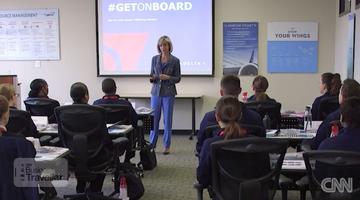 However, Ausband said Delta is tackling the issue on all fronts and wants its employees to be committed in “fighting the fight.” That’s why Delta has trained over 54,000 Delta people to spot signs of human trafficking.

In the “Business Traveller” segment, Ausband spoke to a group of new employees undergoing the training, sharing how the topic affected her personally and strengthened her commitment to the cause.

“I was home one Friday night when my husband got a call from an employee, who was crying hysterically,” Ausband told the group. “She suspected her daughter had been trafficked while walking to a friend’s house and was trying to reach out to everyone she could to find her.”

Ausband shared she would not have had knowledge about organizations like Polaris that run the National Human Trafficking Hotline (1-888-373-7888) if it hadn’t been for Delta raising awareness. Thankfully, a week later, the woman’s daughter was returned home safely.

The segment also showcased one of the airline’s situational awareness exercises, where flight attendants work together during a mock flight to spot warning signs. Flight attendants noticed a passenger’s peculiar, aggressive behavior and reported it to the captain to begin the airline’s human trafficking investigation process.

“As they’re on that plane 30,000 feet up, we’re training them to pick out the signs and also to be vigilant when they’re out and about around the world,” Ausband said. “We’re tackling it on every level that we can to make a difference.”

SkyMiles members can donate miles to Polaris through Delta’s SkyWish program at delta.com to cover the airfare survivors need to return home, receive critical services, reunite with their families or engage in survivor leadership opportunities. Learn more about Delta’s efforts and how you can #GetOnBoard.