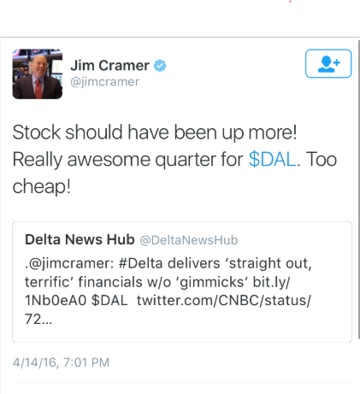 "This is a very cheap stock," Cramer said on "Squawk on the Street,” when Delta reported a $1.56 billion adjusted pre-tax profit. Boosted by the solid financial announcement, stocks rose 2.5 percent to $49.22 in early morning trading.

"That capacity number indicates you should believe," Cramer added, referencing the airline’s 2.7 percent increase in capacity for the first quarter.

The CNBC host explained that Delta’s stock is undervalued because many investors fail to believe an airline can be a reliable buy. “If the dollar continues to get weaker, you're going to see a very big earnings gain here. I like this stock very much," Cramer said.

Cramer was also impressed with the way in which Delta presented its earnings, saying it’s “simple” and “the way it used to be” without “gimmicks,” as he enthusiastically waved around the Q1 press release on air.