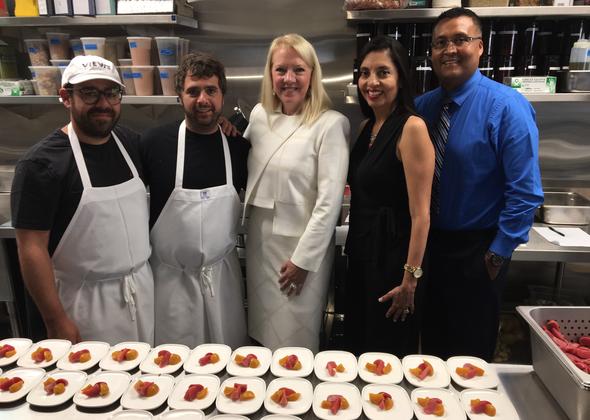 Along with its new Los Angeles-based chef partners Jon Shook and Vinny Dotolo, Delta invited select local customers and media to join them for an experiential, behind-the-scenes look at how the airline is working with the duo to select its first in-flight menu.

Attendees were treated to a tour of the local commissary where, along with their team, Shook and Dotolo will prepare freshly made meals that will be transported to LAX daily to ensure customers experience restaurant level service in the skies.

“When we began cultivating our partnership with Jon and Vinny early on we talked about the importance of not just stamping their names on our menus,” said Lisa Bauer, Vice President — On-Board Services, who attended the menu presentation and spoke to attendees. “At Delta, it’s so much more than that. It’s about partnering with chefs to create authentic, locally-sourced meals on board. The Delta model is built around creating authenticity by partnering with chefs and their teams to actually source, prepare and cook the meals — and then deliver them to Delta to board.”

Throughout the event, Shook and Dotolo talked to attendees about the benefits of the space, their relationship with local purveyors and suppliers, and gave an overview of the sample items available for tasting. After sampling the items, guests had the opportunity to vote for their favorites from each category — including nuts, appetizers, salads, soups, main entrees, ice cream flavors, cookies and breakfast items — to help Delta and Shook and Dotolo narrow down the menu selections for their first rotation in December. 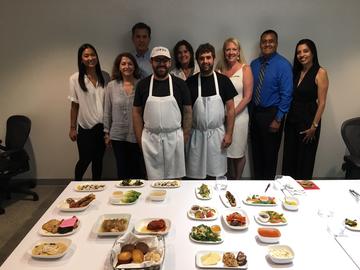 Ranjan Goswami, Vice President — Sales West, who is based in Los Angeles also attended the event to talk to the attendees about Delta’s investments and presence in LA. Additionally, two Delta Employee Involvement Group members from In-Flight Service attended the tasting to share their feedback and insights from a flight attendant perspective.

Shook and Dotolo are behind some of the most sought-out restaurants in town and, beginning in December, Delta customers on flights departing LAX will enjoy their cuisine on flights to New York-JFK and Washington-DCA.  The new menus will feature local, fresh and seasonal ingredients, and will be reflective of the fare served at several of the duo’s most popular establishments including Son of a Gun and Jon & Vinny's, which was recently named one of the best Italian restaurants in LA by TimeOut Los Angeles.

To prep for their onboard debut, the culinary duo also took the skies in July to learn more about serving up hand-crafted dishes at 30,000 feet during a test flight from LAX-JFK. 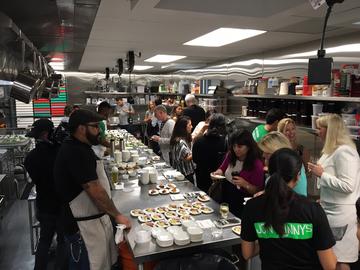 The new partnership with the two James Beard Award winning LA chefs and entrepreneurs continues more than a decade of Delta bringing star-quality food and beverage programs to its flights. In addition to partnering with Shook and Dotolo, Delta also partners with Atlanta-based chef Linton Hopkins and New York-based Union Square Hospitality Group. The chef-driven menus highlight the airline's industry-leading focus on providing seasonally and regionally-inspired cuisine to customers.

Additionally, Delta partners with Master Sommelier Andrea Robinson to create a robust wine program that also incorporates a seasonal approach pairing perfectly with the airline’s Delta One menus. This year, Robinson has sourced a number of locally-made wines from small, artisanal wineries that bring to the tray table a flavor and body uniquely their own.