Decking the hangars from coast to coast 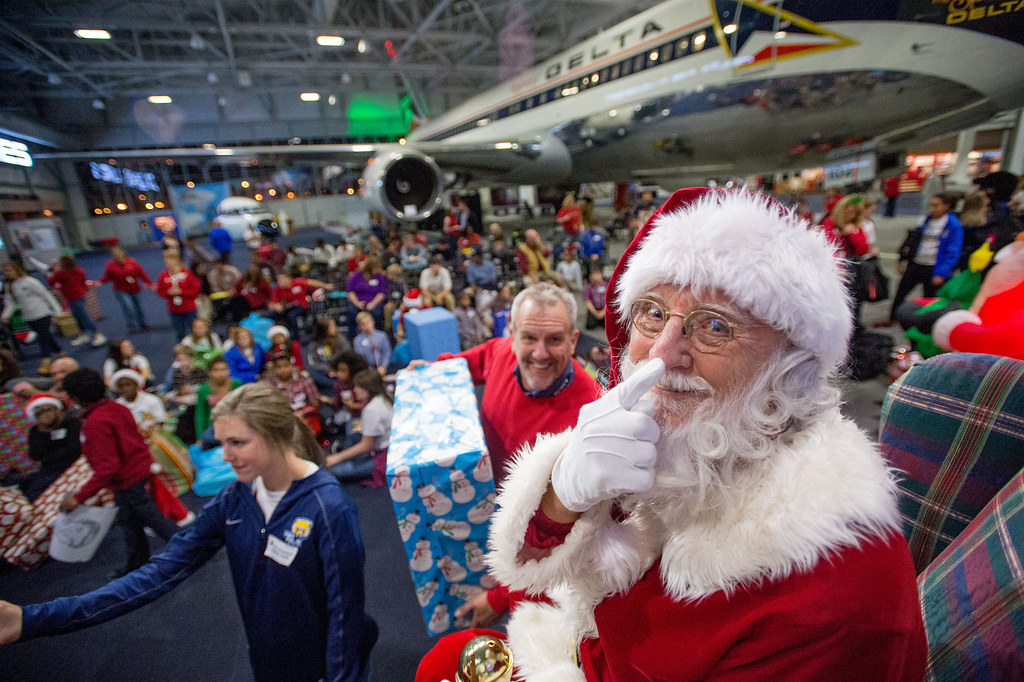 Delta transformed its hangars this holiday season into a winter wonderland to give children who are sick or in need the Christmas they deserve.

The airline’s Holiday in the Hangar events were held in Atlanta, Los Angeles, New York and Seattle throughout the month of December. Children were invited from a variety of charitable organizations to enjoy a magical night complete with a flight to the “North Pole”, gifts and a visit from the one and only Santa Claus.

“At Delta, we have a culture of giving back to those in need and serving the communities where we live and work – especially during the holiday season,” said Tad Hutcheson, Delta’s Vice President – Community Affairs. “Whether these children are taking a break from hospital visits or experiencing Christmas for the first time, we want to ensure they enjoy a magical night from start to finish. Seeing the smiles and joy on their faces reminds us what the holiday season is all about.”

On Dec. 2, Los Angeles-based Delta employees hosted more than 100 children from Camino Nuevo Charter School – Burlington Campus and families from Children’s Hospital Los Angeles at the 4th annual Holiday in the Hangar LAX event. The event included a fantasy flight to the “North Pole” for a holiday celebration led by Delta elves. The children, ages 5 to 10 years, who attended the event were dealing with economic or medical challenges in their lives. Delta, along with the LA Lakers, LA Kings, Coca-Cola, GRAMMYS and GRAMMY Museum came together to create a winter wonderland with fun activity stations for the kids to create and play. Santa also made a guest appearance with special elves, actresses Shay Mitchell, from ABC Family’s “Pretty Little Liars”, and Rowan Blanchard, from Disney’s “Girl Meets World,” who handed out gifts to all the children. The day ended with each child receiving Delta book bags filled with items from the airline’s partners.

On Dec. 4, more than 100 Delta volunteers hosted 70 kids from Atlanta-based Christian City and Calvary Homes at the Atlanta’s Holiday in the Hangar event at the Delta Flight Museum. The airline has hosted this event for the past 34 years in Atlanta, where Delta employees and retirees put together a magical night filled with fun, food and entertainment… plus a visit from Santa, of course!  This year’s special guests included Homer, the Atlanta Braves mascot, Snoopy, who was recently made an honorary Delta pilot, the Coca-Cola Polar Bear and Gutsy the Flying Fox.

On Dec. 8, more than 80 Delta volunteers hosted nearly 90 children, ages one month to 16 years old, for the 5th annual Seattle Santa Express Holiday in the Hangar event.  This year’s event was held for kids from four Seattle-based nonprofit organizations, all providing housing and assistance to families faced with financial challenges: Acres of Diamonds, FUSION, Imagine Housing, and Mamma’s Hands.  The volunteers made the night special with a flight to the “North Pole”, food, Santa Claus and gifts. Additionally, a food bag was sent home with every family to help during the holidays.

New York-based Delta employees, in partnership with the YMCA of Greater New York, hosted more than 150 children from elementary school P.S. 029 in Queens at the fifth annual Holiday in the Hangar event at JFK on Dec. 15. The kids boarded a chartered Delta 767 aircraft at JFK’s Terminal 2 and “flew” to the “North Pole” — a JFK hangar transformed into a holiday winter wonderland. Upon arrival, the children were greeted by special guests including actress Abigail Breslin, Mr. Met, The Rockettes and Santa Claus and his elves, who handed out presents to every child in attendance. Throughout the day, the children were treated to holiday activities, games, music, crafts, lunch and snacks, all thanks to Delta partners including the New York Mets, New York Knicks, New York Rangers, New York Liberty, Coca-Cola and the YMCA of Greater New York.

Delta gives back to the communities it serves during the holidays by partnering with organizations that reinforce its commitment to ‎global health, wellness and education.