​It's rare that Delta customers' bags are delayed, but the airline has invested in innovative ways to quickly reunite customers with their luggage, including using the crowdsourced delivery tech company Roadie.

Since 2015, Delta has worked with Roadie, an Atlanta-based on-the-way service that connects businesses and people with drivers that make long-haul, local and regional deliveries. Now Delta plans to add 22 airports this quarter to its roster of more than 50 Roadie locations (listed below), ranging everywhere from San Francisco to Fort Lauderdale. 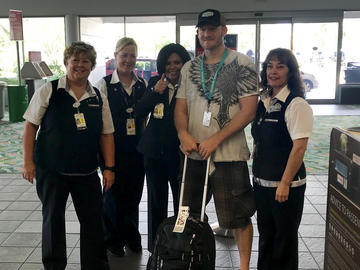 Because Roadie taps into unused space already on the road, its community of over 120,000 drivers enables the airline to get delayed bags delivered faster without sacrificing its high level of service for Delta customers.

Delta's Chief Operating Officer Gil West explained, "We are working hard to eliminate bag delays but when they do happen, we want to reunite customers with their bags as quickly and painlessly as possible. Roadie has been an important partner in reducing delays and hassles for customers."

Customers are able to receive real-time updates that allow them to track their bag from the moment they have left the airport.

Torrence Abercrombie, Delta's Station Manager at Chicago-Midway, said Roadie has been a welcome partner. "It's been great - our baggage agents love Roadie because it's immediate. We can see the time stamps from pickup to delivery and know that we're delivering bags to customers in a timely manner."

The airports using Roadie see 65% faster delivery times on average while delivery times at established locations have improved 20% year over year, thanks to Roadie's continued investment in technology improvements and driver growth.

"We're proud to help Delta get bags back into customers' hands faster and friendlier than any other airline in the industry," said Marc Gorlin, Founder & CEO of Roadie. "We're transforming mishaps into wins, and customers are taking notice. Not only have we drastically reduced delivery times, but customer satisfaction scores have shot up as well."

Here's a full list of locations where Delta partners with Roadie: