Delta brought service in the form of additional flying as well as a helping hand to the community Saturday in Raleigh-Durham, N.C.

Delta began selling flights between Raleigh-Durham International Airport and Austin-Bergstrom International while 300 volunteers from Delta, KaBOOM!, the Airport Authority, the Durham community, and students from surrounding universities rolled up their sleeves and built a new playground for the Durham Head Start Leathers-Meachem Center. The playground became Delta’s 17th KaBOOM! Build in the past three years and the first in the region.

Delta is the largest airline at RDU with 68 peak day departures to 20 destinations, and has grown available seats by more than 60 percent since 2010.  In November, Delta Sky Club will open its expanded facilities with additional guest seats, more accessible power and a new food and beverage area.

“Delta has made significant investments in the Triangle region with new international service to Paris, domestic service to Washington D.C., Salt Lake City, Newark and Seattle, and a dozen community partnerships including Duke, N.C. State and Carolina,” said Tori Forbes-Roberts - Pricing and Revenue Management. “But our most impactful effort to date may have been in building a playground to give the community’s children a safe place to play.”

Other key event guests included the Durham Police and Fire departments, who educated students with hands-on demonstrations for keeping their communities safe and former Durham Head Start leaders, Yvette Leathers and Frank Meachem, City Council member Eddie Davis, who assisted in cutting the ribbon, and Michael Landguth, President of the RDU Airport Authority, who with his team volunteered in construction of the new facilities.

The new playground, which includes a slide, rock climbing wall, balance beam, activity walking path and picnic tables, is expected to provide more than 1,000 kids in Durham an accessible environment, replacing equipment that was more than 15 years old. KaBOOM! and Delta hosted a design day earlier in the summer, during which kids were encouraged to create the dream playground. Several of their creative drawings were used to design this unique playspace.

Durham Head Start’s goal is to engage, support and empower children and families in the community to be successful in school and life  by providing services such as an early childhood education, job assistance, parenting classes, job skills training, and health and wellness classes.

KaBOOM! is the national non-profit dedicated to giving all kids – particularly those growing up in poverty in America – the childhood they deserve filled with balanced and active play. Since 1995, KaBOOM! has collaborated with partners to build, open or improve thousands of playgrounds. Delta has also constructed playgrounds with KaBOOM! in Atlanta, Detroit, Indianapolis, Los Angeles, Minneapolis, Nashville, New York and Seattle. 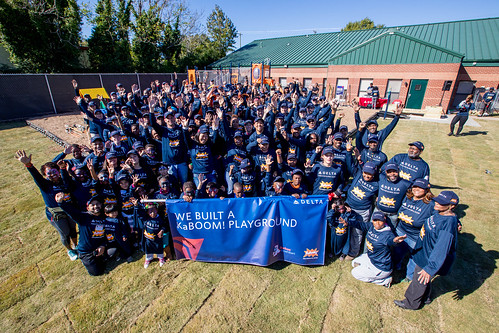