• Adjusted earnings per share were $0.96, reflecting a 28 percent increase year over year on solid core performance and benefit from the early renewal of the American Express agreement.

• Generated $2.0 billion of operating cash flow and $760 million of free cash flow after investing $1.3 billion into the business, primarily for aircraft purchases and modifications.

• Returned $1.6 billion to shareholders, comprised of $1.3 billion of share repurchases and $233 million in dividends.

“Delta is off to a solid start in 2019.  Our March quarter performance demonstrates the power of our growing brand preference, our unmatched competitive advantages, and most importantly the Delta people who are committed to providing the best travel experiences for our customers every day.  I’m pleased to recognize their efforts with $220 million toward next year’s profit sharing,” said Ed Bastian, Delta’s chief executive officer. “With the momentum in our business and our American Express contract renewal, we have increased confidence in achieving our full-year plan of top-line growth, margin expansion and double-digit earnings growth.”

Delta’s adjusted operating revenue of $10.4 billion for the March quarter improved 7.5 percent, or $728 million versus the prior year. This revenue result marks a March quarter record for the company, driven by improvements across Delta’s business, including an eight percent increase in premium product ticket revenue and double-digit percentage increases in loyalty and Maintenance, Repair and Overhaul revenue.  Cargo revenue declined five percent driven by lower volumes.

“Demand for Delta’s product has never been stronger, as evidenced by our 7.5 percent top line growth in the March quarter.  This underpins our expectation that June quarter unit revenue should grow 1.5 to 3.5 percent, with sequential improvement in passenger unit revenue across all entities,” said Glen Hauenstein, Delta’s president. “With our customer-focused commercial initiatives delivering strong customer loyalty and top-line momentum, we now expect full-year revenue growth of five to seven percent, an increase from our prior guidance.”

Adjusted fuel expense increased $87 million, or five percent, relative to March quarter 2018.  Delta’s adjusted fuel price per gallon for the March quarter was $2.05, which includes a $34 million loss at the refinery due to low gasoline crack spreads.

Adjusted non-operating expense for the quarter was $69 million higher versus the prior year, driven primarily by lower pension income and earnings pressure from international equity partners.

Delta generated $2 billion of operating cash flow, as improved profitability and the seasonal build of cash were partially offset by the $1.3 billion profit sharing payment to employees for 2018 performance.  Delta generated $760 million of free cash flow during the quarter after the investment of $1.3 billion into the business primarily for aircraft purchases and improvements.

Delta accelerated the repurchase of shares in the quarter, funded by a $1 billion short-term loan.  During the quarter, the company repaid $300 million of this loan and expects that the remainder will be repaid by year end.  Delta returned $1.6 billion to shareholders during the March quarter, comprised of $1.3 billion of share repurchases and $233 million in dividends.

In the March quarter, Delta achieved a number of milestones across its five key strategic pillars.

• Celebrated the commitment of the Delta people through $1.3 billion in profit sharing for 2018 performance, the second largest profit sharing payout in the airline's history.

• Introduced a paid day of service for all employees, building on Delta's commitment of donating 1% of profits to charitable organizations, through approximately 640,000 hours of community service.

• Continued Delta’s commitment to the communities of our employees, partners and customers through participation in the 16th Delta Global Build with Habitat for Humanity and celebrating the life of Dr. Martin Luther King, Jr. through a grant to re-open the Martin Luther King, Jr. National Historical Park in Atlanta during the MLK Holiday Weekend after it had remained closed due to lack of federal appropriations.

• Achieved the highest network system completion factor for the first quarter since 2012, continuing to raise the bar on operational excellence and delivering consistency and reliability to our customers.

• Celebrated five years of the Delta and Virgin Atlantic partnership, focused on delivering the best customer experience in the trans-Atlantic market, with more than 70 daily nonstop flights between the U.K. and U.S., leading on-time performance, and enhanced terminal and in-cabin technology and service.

• Filed with the U.S. Department of Transportation for additional service to Tokyo-Haneda airport, proposing to expand Delta's operational reliability and exceptional customer service to more customers flying across the Pacific.

• Signed an 11-year renewal with American Express, ensuring that the two companies continue to work together to deliver best-in-class value to customers, while doubling the expected benefits to Delta to nearly $7 billion annually by 2023 from $3.4 billion in 2018.

• Launched the ability for SkyMiles members to upgrade their experience post-purchase using miles through the Fly Delta App, increasing customer choice and the opportunities for customers to use miles as a form of payment with Delta.

The Board of Directors has set the airline's annual meeting of shareholders for 7:30 a.m. EDT, June 20, 2019. The meeting will be held at the offices of Davis Polk & Wardwell LLP, 450 Lexington Avenue, New York, New York.

• Delta serves nearly 200 million people every year, taking customers across its industry-leading global network to more than 300 destinations in over 50 countries.

• Headquartered in Atlanta, Delta offers more than 5,000 daily departures and as many as 15,000 affiliated departures including the premier SkyTeam alliance, of which Delta is a founding member.

• Delta has been recognized as a Fortune’s top 50 Most Admired Companies in addition to being named the most admired airline for the eighth time in nine years. Additionally, Delta has ranked No.1 in the Business Travel News Annual Airline survey for an unprecedented eight consecutive years and named one of Fast Company’s Most Innovative Companies Worldwide for two consecutive years.

• As an employer, Delta has been regularly awarded top honors from organizations like Glassdoor and recognized as a top workplace for women and members of the military. Delta CEO Ed Bastian was named among the “World’s Greatest Leaders” by Fortune magazine in 2018.

• More about Delta can be found on the Delta News Hub as well as delta.com, via @DeltaNewsHub on Twitter and Facebook.com/delta.

Additional information concerning risks and uncertainties that could cause differences between actual results and forward-looking statements is contained in our Securities and Exchange Commission filings, including our Annual Report on Form 10-K for the fiscal year ended December 31, 2018.  Caution should be taken not to place undue reliance on our forward-looking statements, which represent our views only as of April 10, 2019, and which we have no current intention to update. 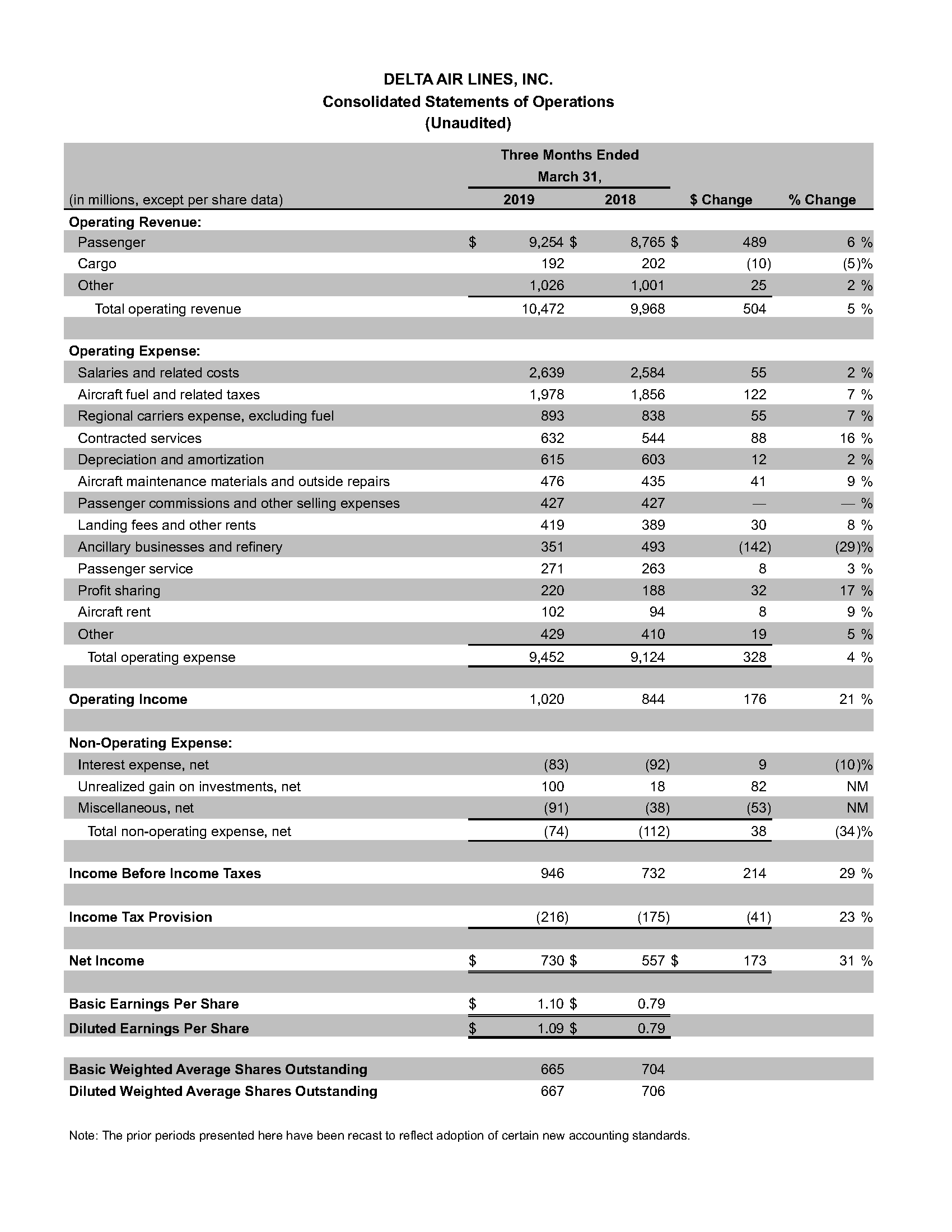 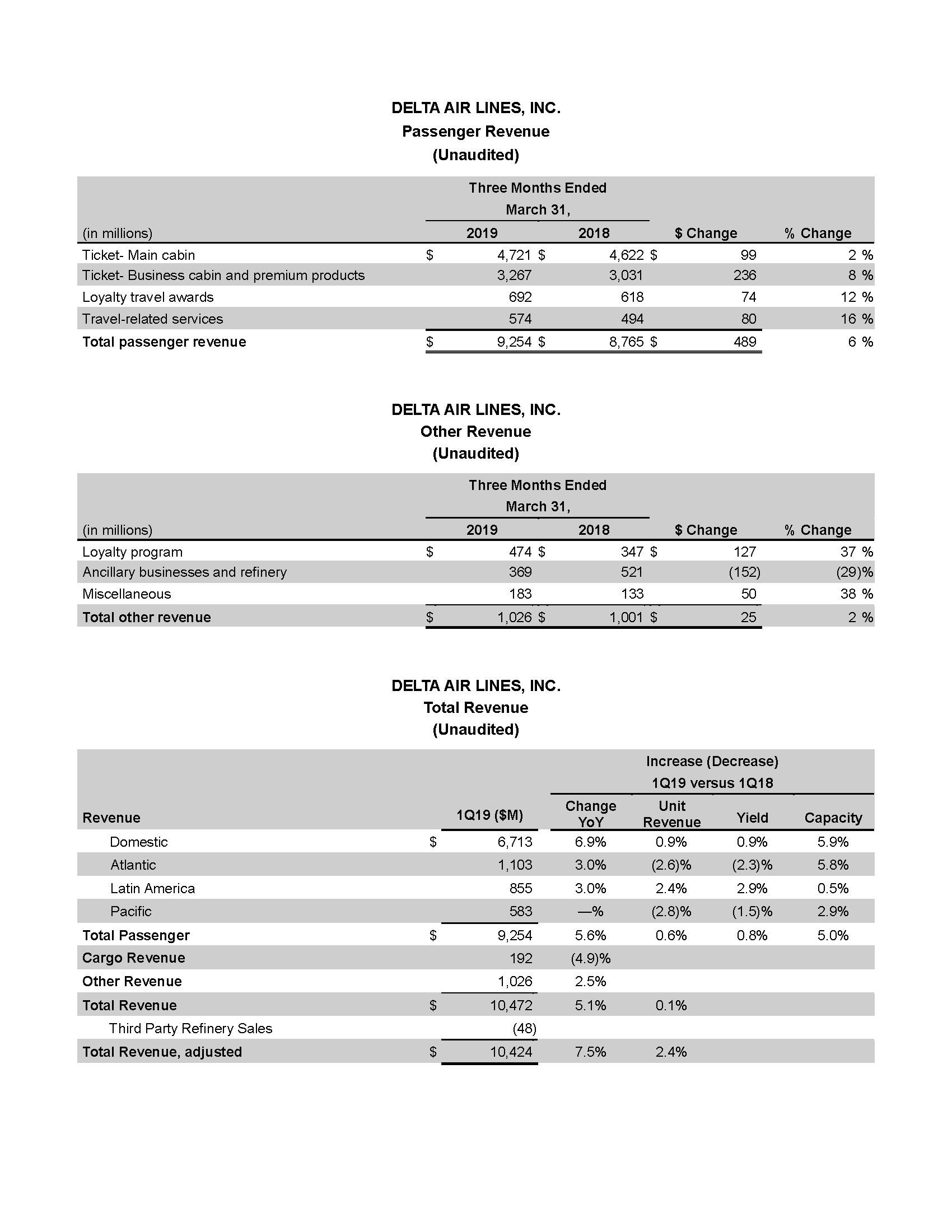 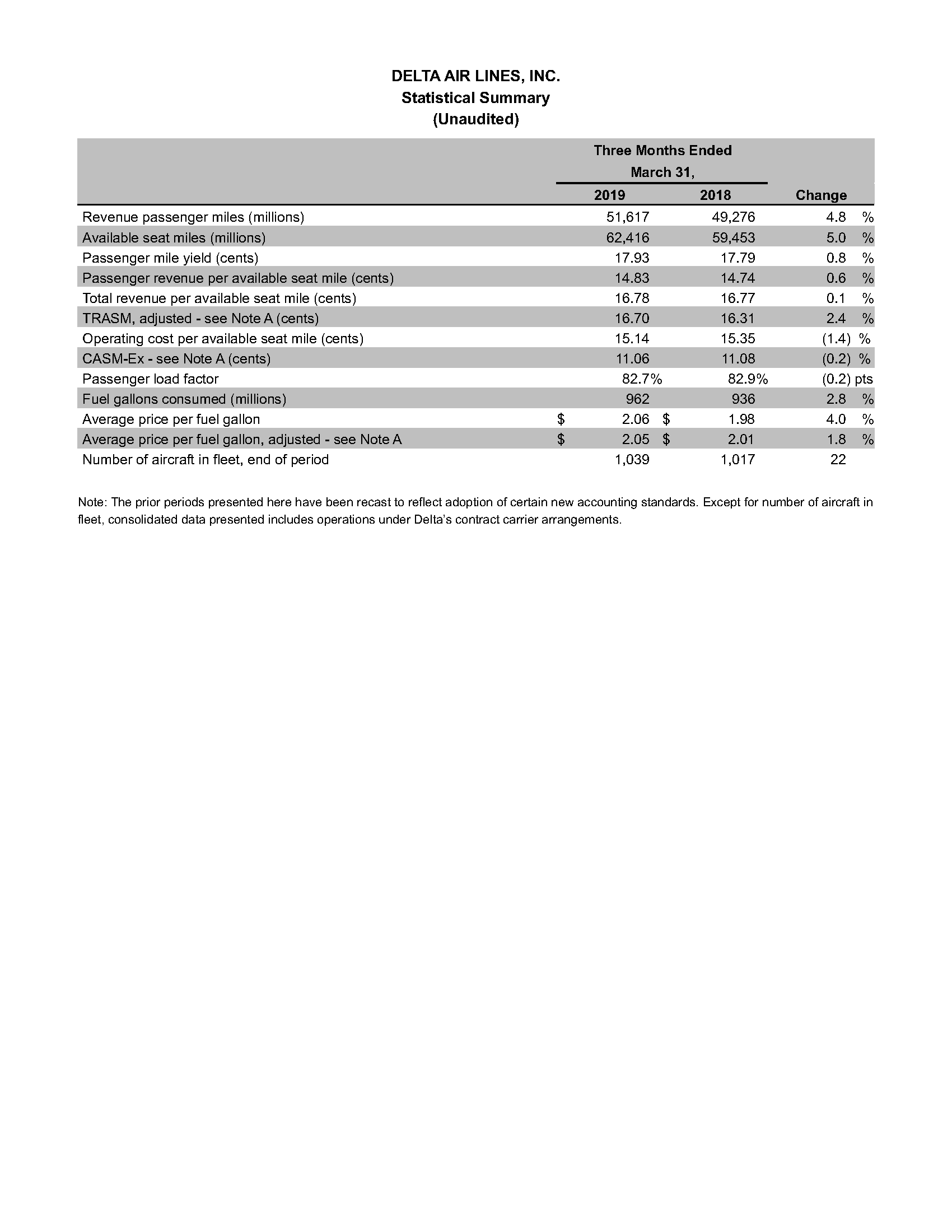 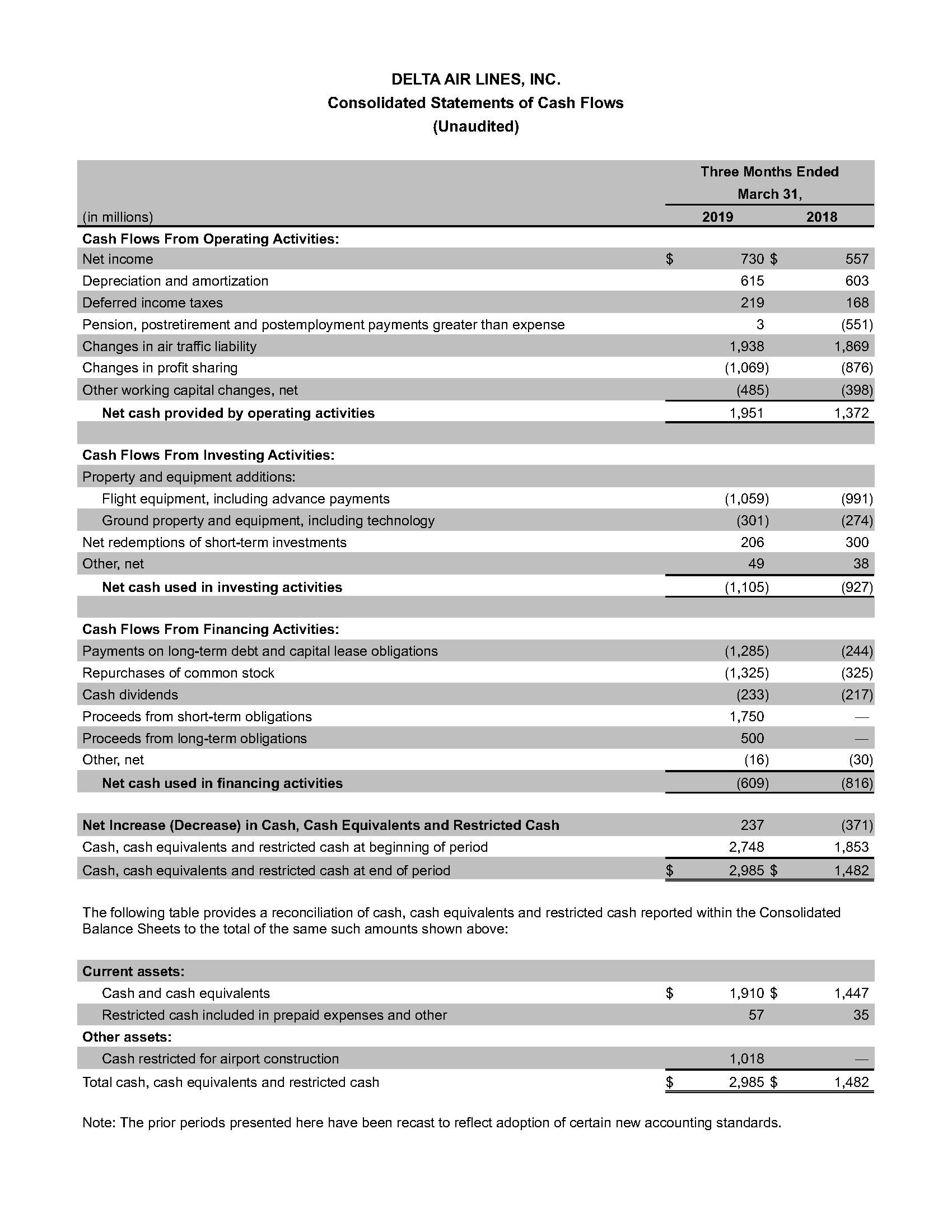 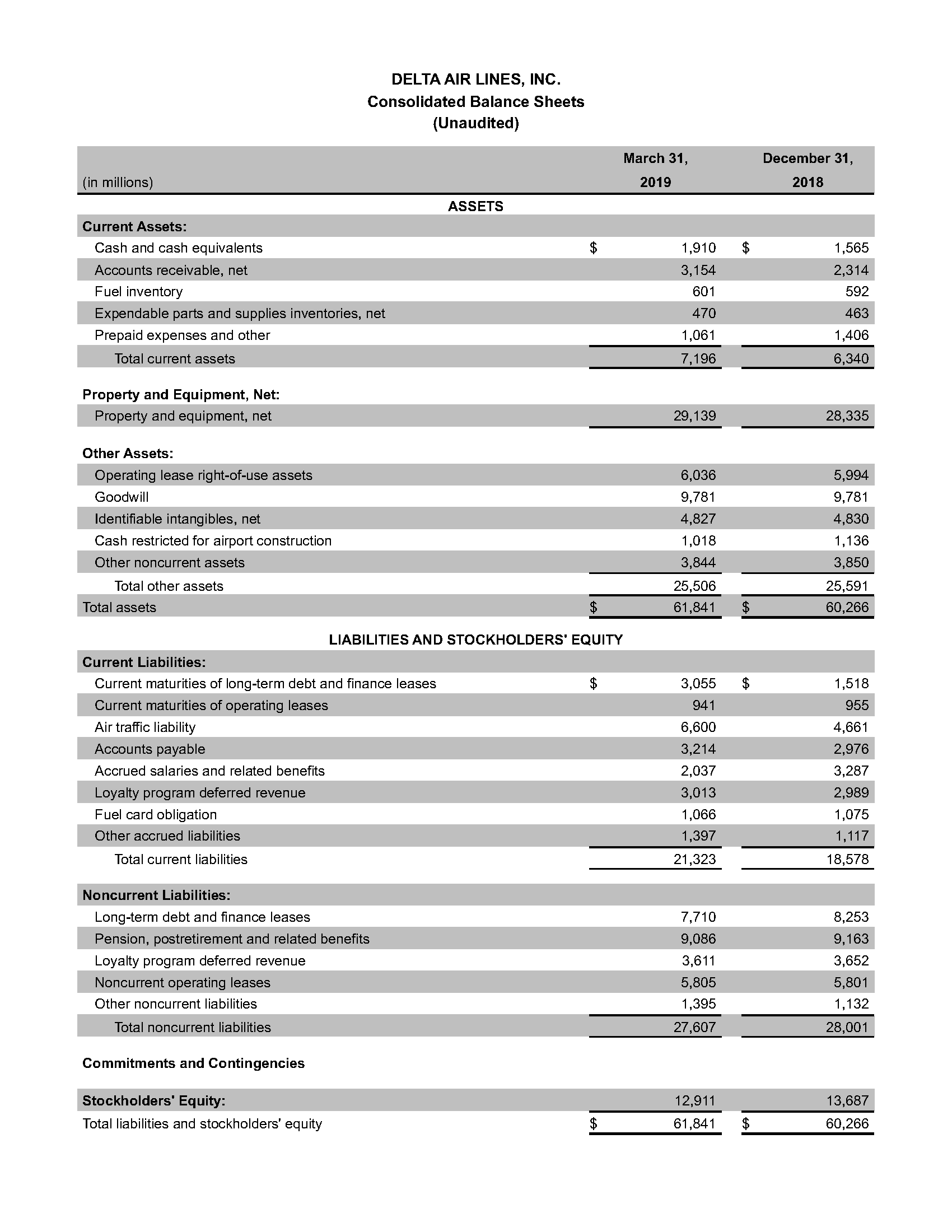 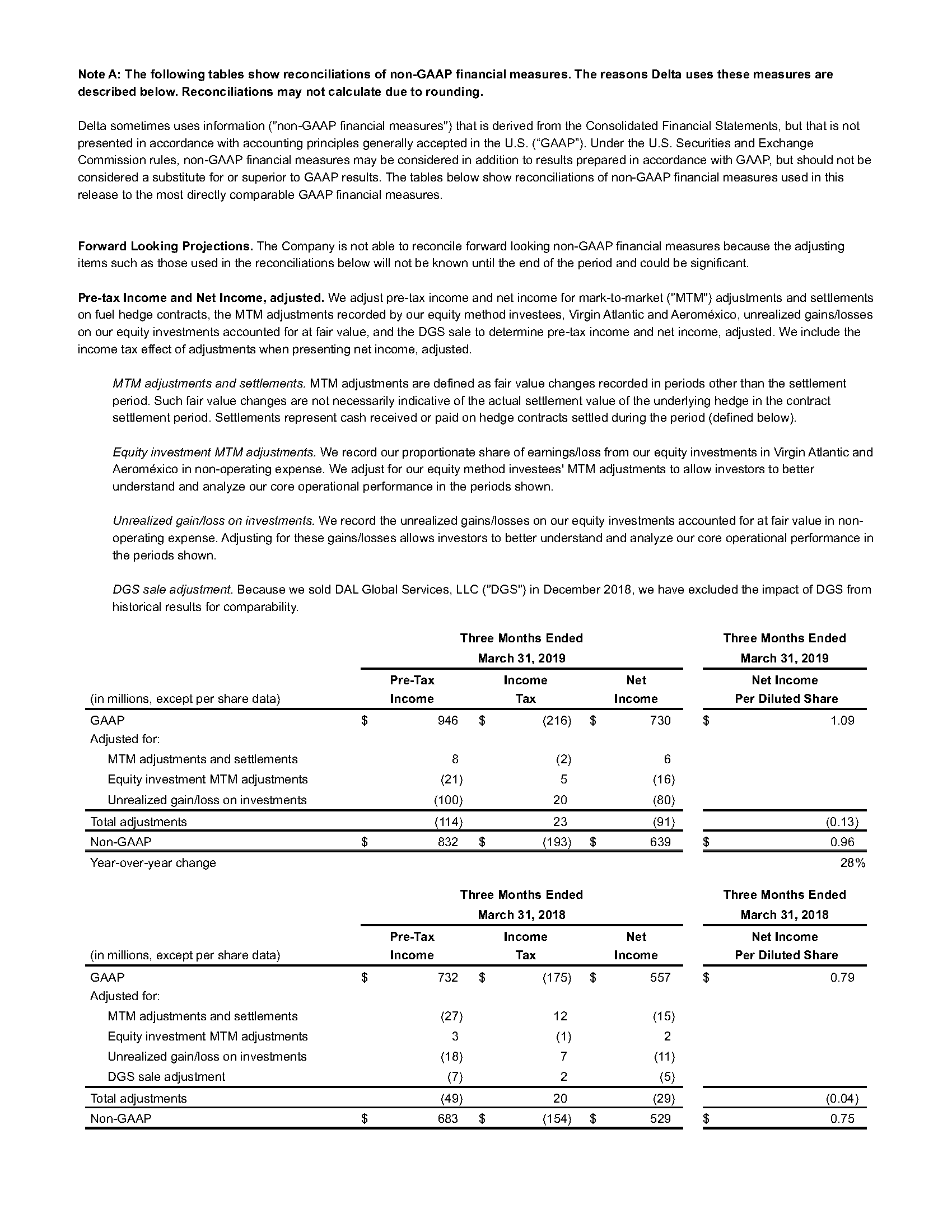 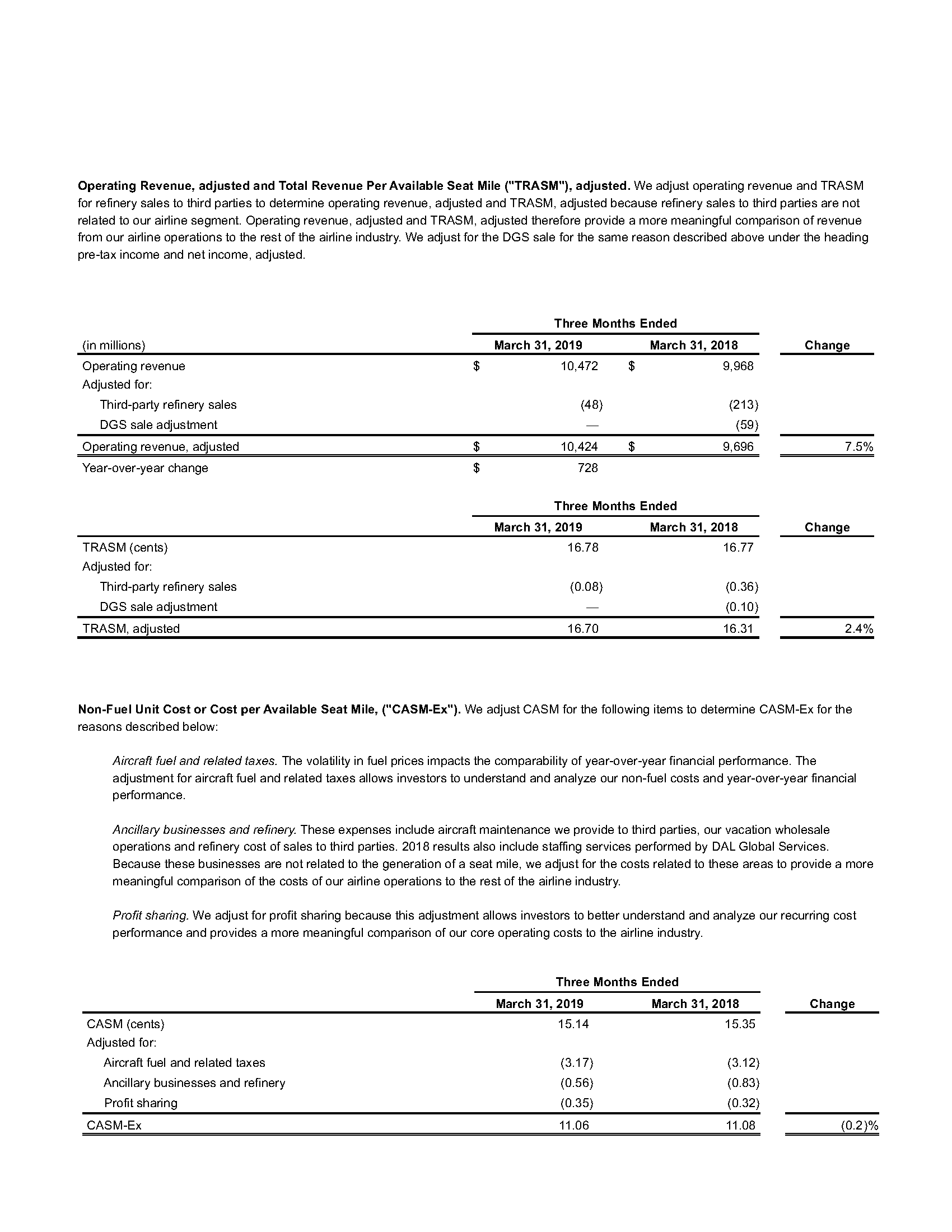 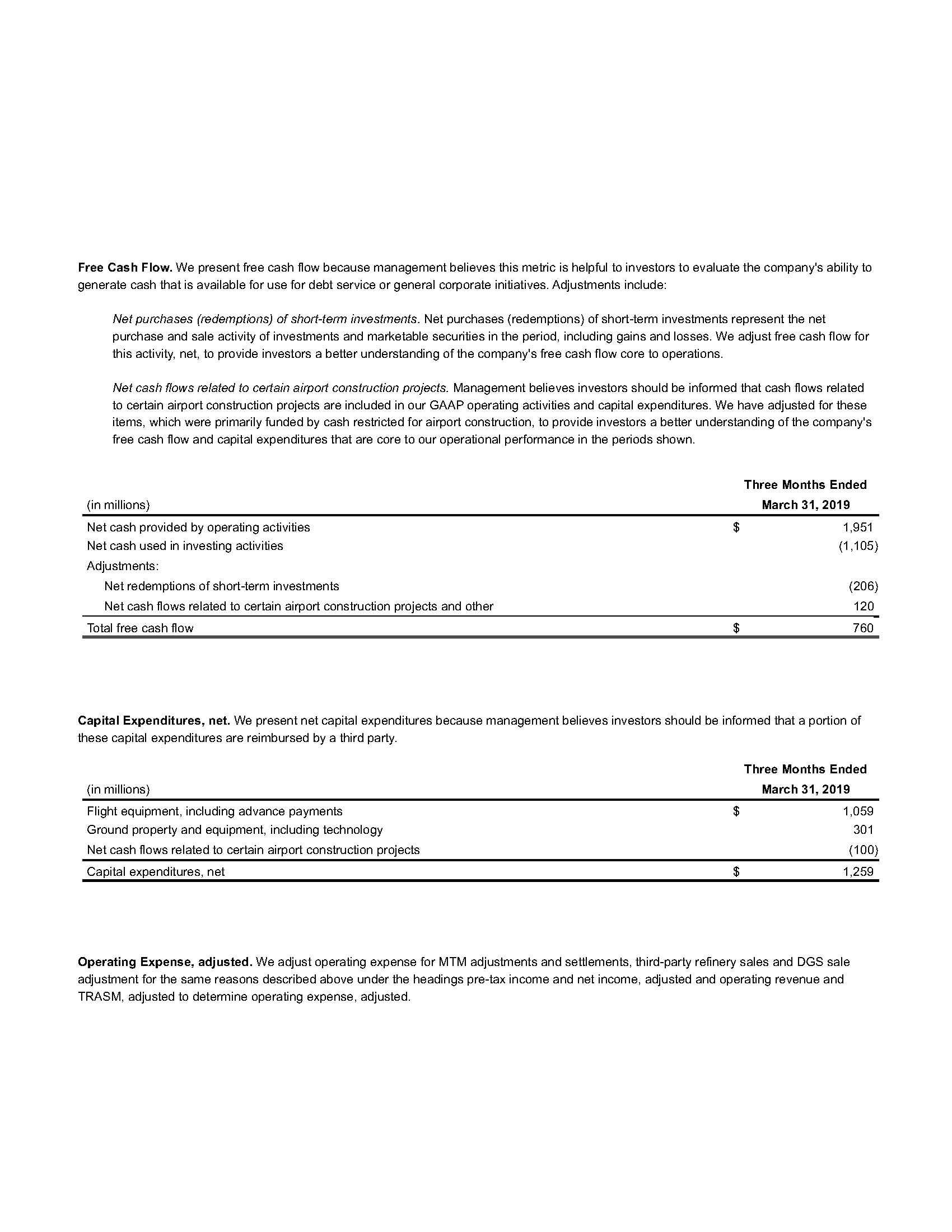 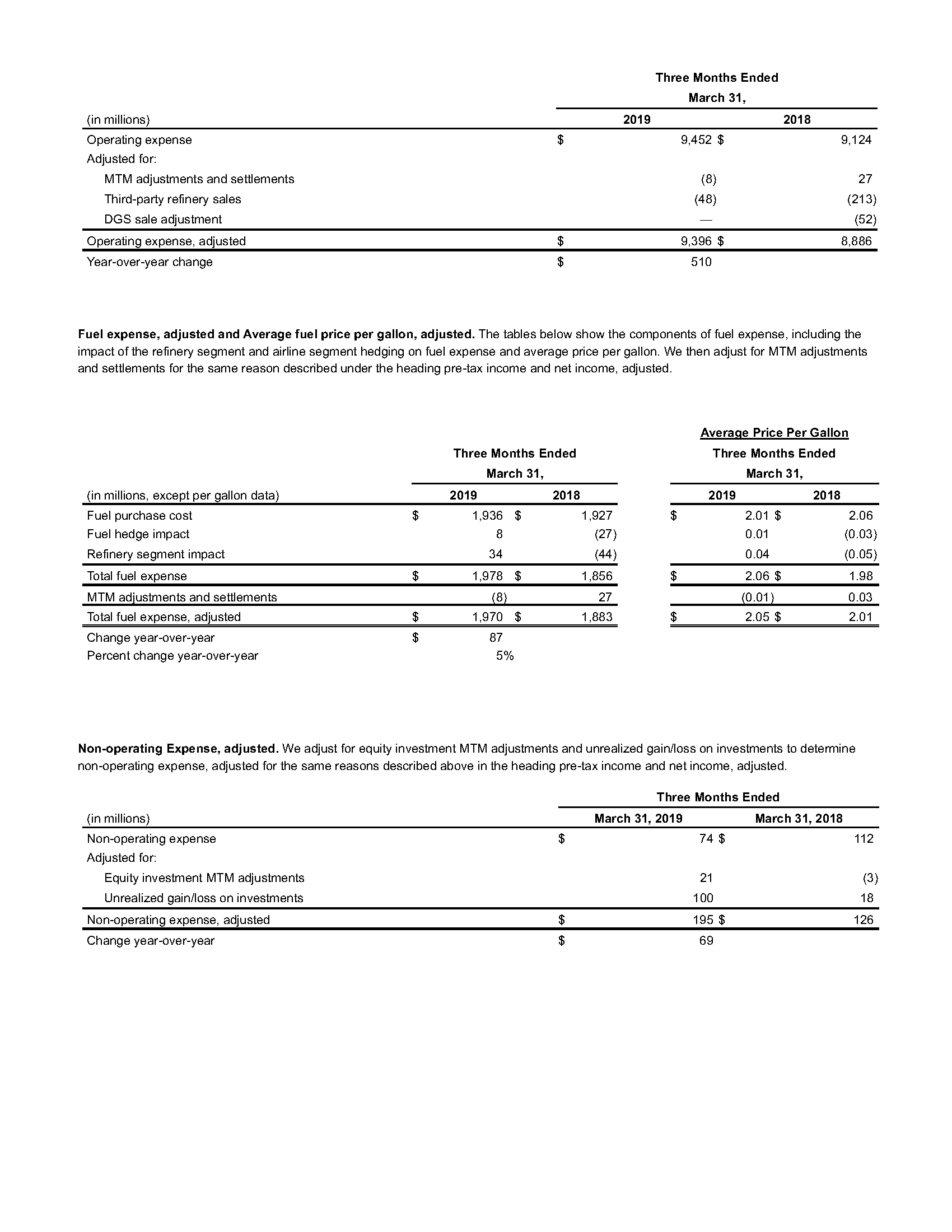