Delta Air Lines today reported financial results for the December quarter 2017.  Highlights of those results, including both GAAP and adjusted metrics, are below and incorporated here.

Adjusted pre-tax income for the December 2017 quarter was $1.0 billion, despite a $60 million impact from the combination of December’s power outage at Atlanta’s Hartsfield-Jackson Airport and Winter Storm Benji.  For the full year, adjusted pre-tax income was $5.5 billion, a $621 million decrease relative to 2016.

“Delta people rose to the challenges of 2017 to produce solid financial results, industry leading operational reliability and strong improvements in customer satisfaction, and it’s an honor to recognize their achievements with $1.1 billion in profit sharing,” said Ed Bastian, Delta’s chief executive officer.   “Looking ahead to 2018, we expect to drive solid earnings growth by growing our top line 4 to 6 percent, improving our cost trajectory and integrating our international partner network.  As a result, we are able to increase our previous full-year guidance to $6.35 to $6.70 per share due to additional benefits from tax reform.”

For the full year, Delta’s operating revenue of $41.2 billion was up 4.0 percent, or $1.6 billion versus prior year.  Total unit revenues excluding refinery sales increased 2.4 percent on 1.0 percent higher capacity.

“We enter 2018 with significant momentum and every entity delivering positive passenger unit revenue for the first time in five years, driven by a robust demand environment and improving business fares,” said Glen Hauenstein, Delta’s president.  “We expect to deliver total unit revenue growth of 2.5 to 4.5 percent in the March quarter and leverage our unrivaled domestic network, international partnerships, and solid pipeline of commercial initiatives to deliver similar performance each quarter throughout 2018.” 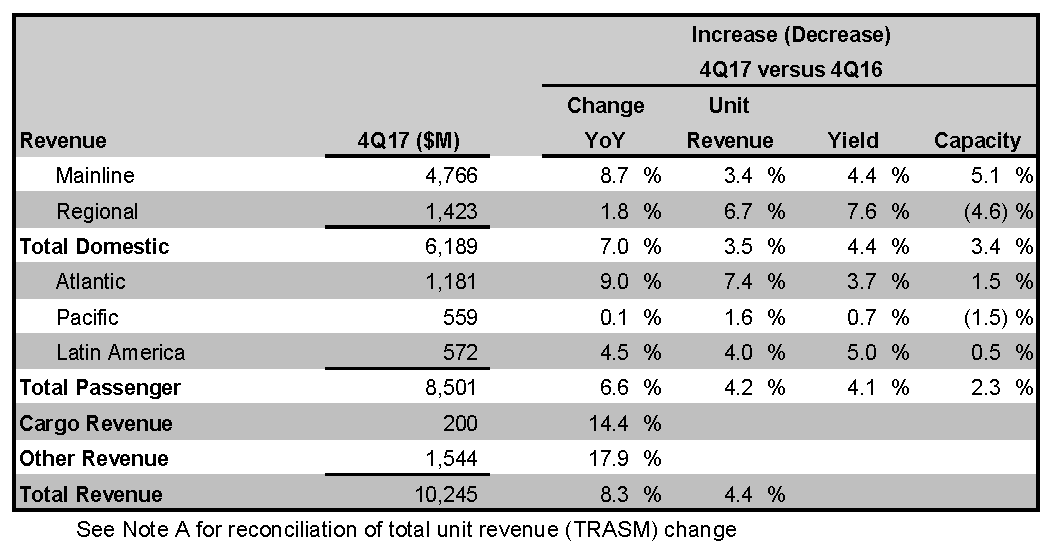 For the March quarter, Delta is expecting improving revenues and the benefit from tax reform to partially offset fuel cost increases and the period of highest non-fuel expense growth for the year.

Adjusted fuel expense2 increased $349 million compared to the same period in 2016 as market fuel prices increased throughout the quarter.  Delta’s adjusted fuel price per gallon for the December quarter was $1.93, which includes $0.03 of benefit from the refinery.

CASM-Ex3 including profit sharing decreased 0.4 percent for the December 2017 quarter compared to the prior year period driven by the impact of Delta’s pilot agreement ratified in the December 2016 quarter. The pilot agreement resulted in $475 million of expense in the prior year period and included a $380 million retroactive payment for the first three quarters of 2016.

Normalized CASM-Ex4 including profit sharing increased 5.6 percent versus the prior year period, driven by continued investments in Delta’s people, product and operation, as well as pressure from accelerated depreciation due to aircraft retirements.

“Our focus for 2018 is to bring our unit cost trajectory back in line with our long-term 0 to 2 percent target,” said Paul Jacobson, Delta’s chief financial officer.  “We have a line of sight to achieving our cost goal, and expect our March quarter to be the peak of our non-fuel expense growth as we lap investments in our business and higher levels of depreciation, and the savings from our fleet and efficiency initiatives begin ramping up as we move through the year.”

Delta generated $1.7 billion of adjusted operating cash flow and $435 million of free cash flow during the quarter. The company invested $850 million into the business for aircraft purchases and improvements, facilities upgrades and technology. The company also spent $450 million to purchase its 10 percent stake in Air France-KLM.

Delta generated $6.8 billion of adjusted operating cash flow and $2.0 billion of free cash flow for the full year, and invested $3.6 billion into the business and $1.2 billion in equity stakes in partner airlines.

During the December quarter, Delta announced an order for 100 state-of-the-art Airbus A321neo aircraft with deliveries beginning in 2020 and a long-term commitment with Pratt & Whitney for Delta TechOps to be a major maintenance, repair and overhaul provider for the PW1100G and PW1500G engines, powering Delta’s A321neo and C Series aircraft.

Adjusted net debt at the end of the quarter was $8.8 billion, up $2.6 billion versus the prior year largely as a result of a $2.5 billion increase in unsecured debt, primarily issued to accelerate pension funding.  The company’s unfunded pension liability declined by $3.6 billion from the end of 2016 to $7.0 billion at the end of 2017.

As a result of the Tax Cuts and Jobs Act of 2017, Delta recognized a one-time charge of $150 million in the December quarter from the estimated impact of the inclusion of foreign earnings and revaluation of deferred tax assets and liabilities. This one-time charge is being excluded from Delta’s results as a special item. For 2018, Delta expects the reduction in the corporate tax rate will result in an all-in book tax rate for the company of 22-24 percent.

Special items for the quarter consist primarily of the impact from tax reform noted above and mark-to-market adjustments on fuel hedges.

Delta Air Lines serves more than 180 million customers each year. In 2017, Delta was named to Fortune’s top 50 Most Admired Companies in addition to being named the most admired airline for the sixth time in seven years. Additionally, Delta has ranked No.1 in the Business Travel News Annual Airline survey for an unprecedented seven consecutive years. With an industry-leading global network, Delta and the Delta Connection carriers offer service to 314 destinations in 54 countries on six continents. Headquartered in Atlanta, Delta employs more than 80,000 employees worldwide and operates a mainline fleet of more than 800 aircraft. The airline is a founding member of the SkyTeam global alliance and participates in the industry’s leading transatlantic joint venture with Air France-KLM and Alitalia as well as a joint venture with Virgin Atlantic. Including its worldwide alliance partners, Delta offers customers more than 15,000 daily flights, with key hubs and markets including Amsterdam, Atlanta, Boston, Detroit, Los Angeles, Mexico City, Minneapolis/St. Paul, New York-JFK and LaGuardia, London-Heathrow, Paris-Charles de Gaulle, Salt Lake City, São Paulo, Seattle, Seoul, and Tokyo-Narita. Delta has invested billions of dollars in airport facilities, global products and services, and technology to enhance the customer experience in the air and on the ground. Additional information is available on the Delta News Hub, as well as delta.com, Twitter @DeltaNewsHub, Google.com/+Delta, and Facebook.com/delta.

Statements in this investor update that are not historical facts, including statements regarding our estimates, expectations, beliefs, intentions, projections or strategies for the future, may be "forward-looking statements" as defined in the Private Securities Litigation Reform Act of 1995.  All forward-looking statements involve a number of risks and uncertainties that could cause actual results to differ materially from the estimates, expectations, beliefs, intentions, projections and strategies reflected in or suggested by the forward-looking statements.  These risks and uncertainties include, but are not limited to, the effects of terrorist attacks or geopolitical conflict; the cost of aircraft fuel; the impact of fuel hedging activity including rebalancing our hedge portfolio, recording mark-to-market adjustments or posting collateral in connection with our fuel hedge contracts; the availability of aircraft fuel; the performance of our significant investments in airlines in other parts of the world; the possible effects of accidents involving our aircraft; the restrictions that financial covenants in our financing agreements could have on our financial and business operations; labor issues; interruptions or disruptions in service at one of our hub, gateway, or key airports; breaches or security lapses in our information technology systems; disruptions in our information technology infrastructure; our dependence on technology in our operations; the effects of weather, natural disasters and seasonality on our business; the effects of an extended disruption in services provided by third party regional carriers; failure or inability of insurance to cover a significant liability at Monroe’s Trainer refinery; the impact of environmental regulation on the Trainer refinery, including costs related to renewable fuel standard regulations; our ability to retain management and key employees; competitive conditions in the airline industry; the effects of extensive government regulation on our business; the sensitivity of the airline industry to prolonged periods of stagnant or weak economic conditions; uncertainty in economic conditions and regulatory environment in the United Kingdom leading up to and following the exit of the United Kingdom from the European Union; and the effects of the rapid spread of contagious illnesses.  Additional information concerning risks and uncertainties that could cause differences between actual results and forward-looking statements is contained in our Securities and Exchange Commission filings, including our Annual Report on Form 10-K for the fiscal year ended Dec. 31, 2016.  Caution should be taken not to place undue reliance on our forward-looking statements, which represent our views only as of Jan. 11, 2018, and which we have no current intention to update. 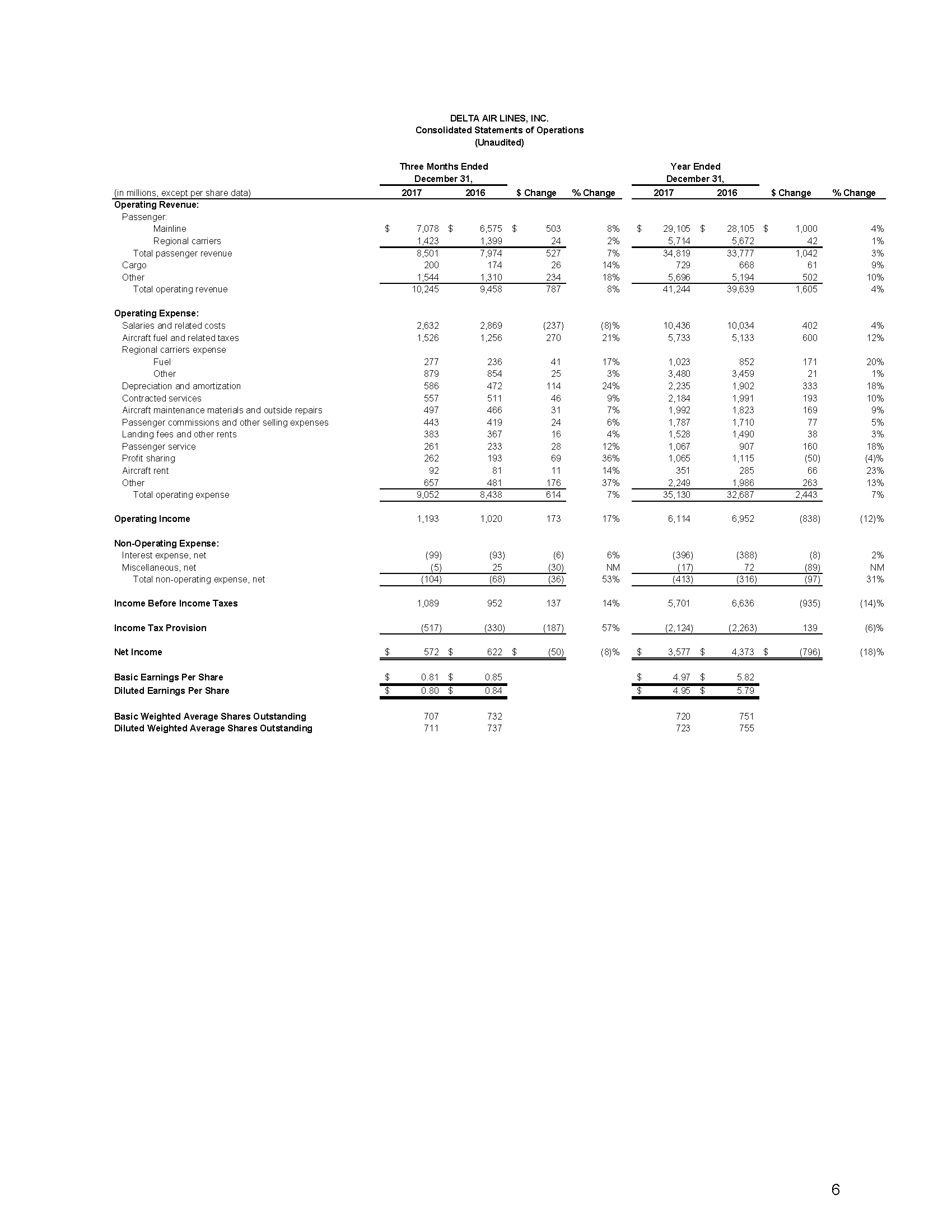 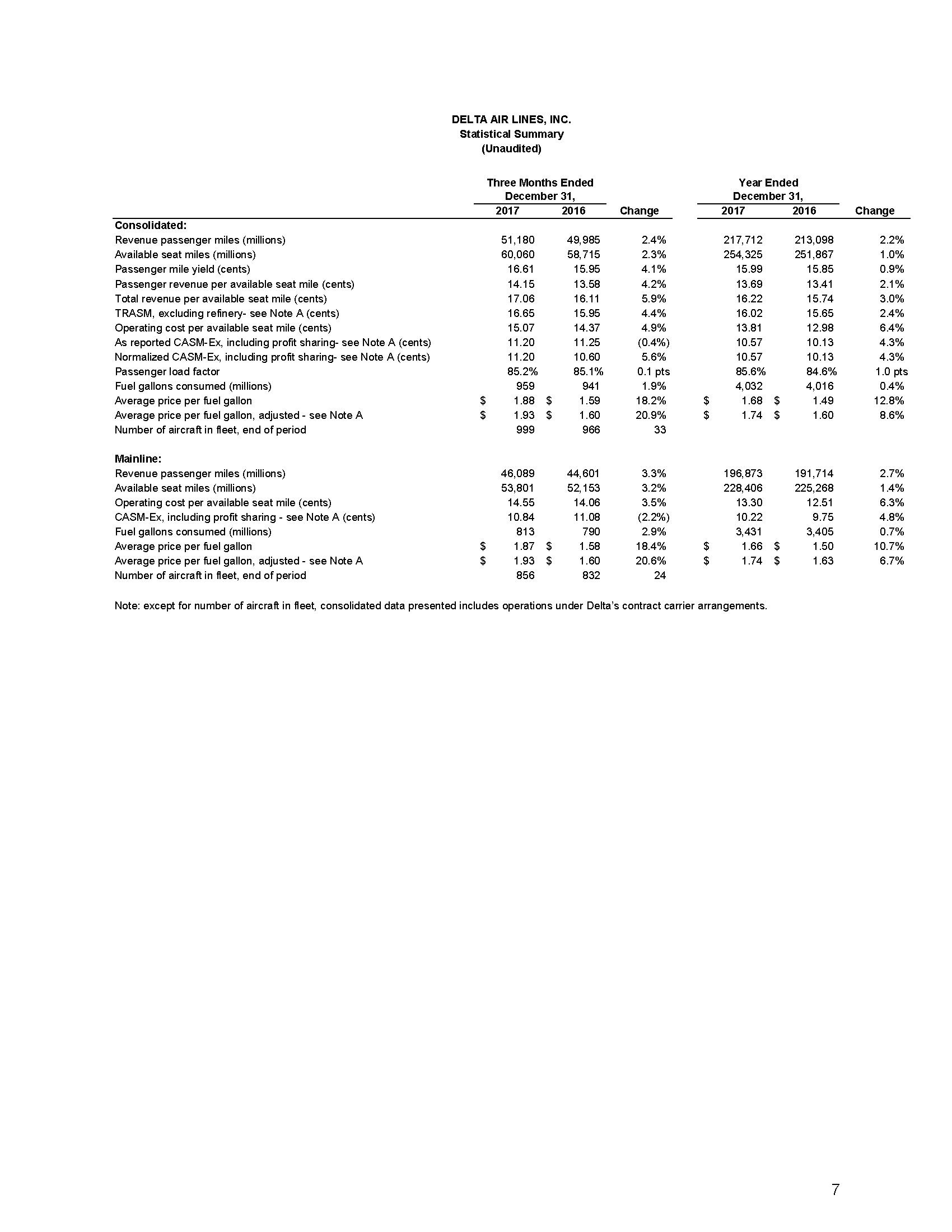 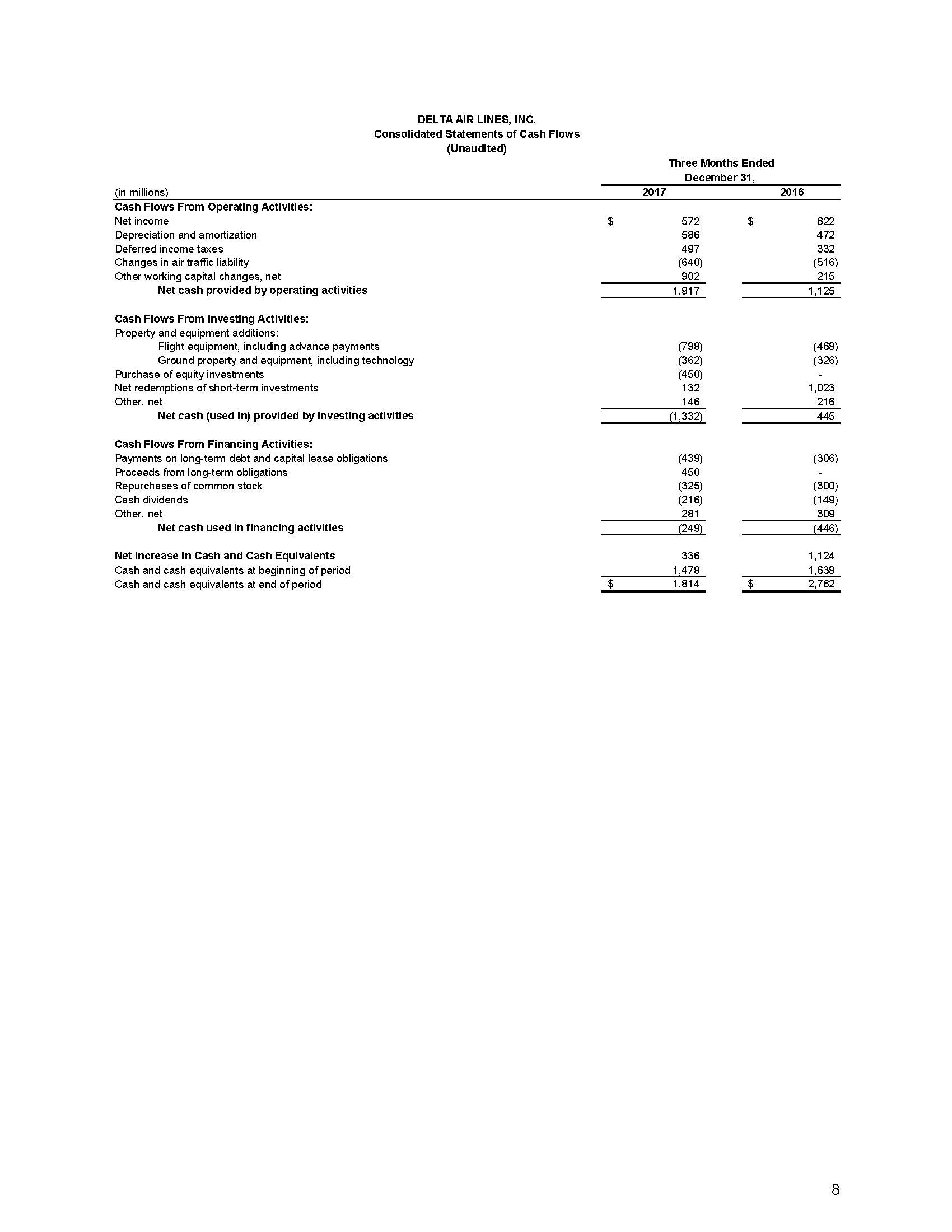 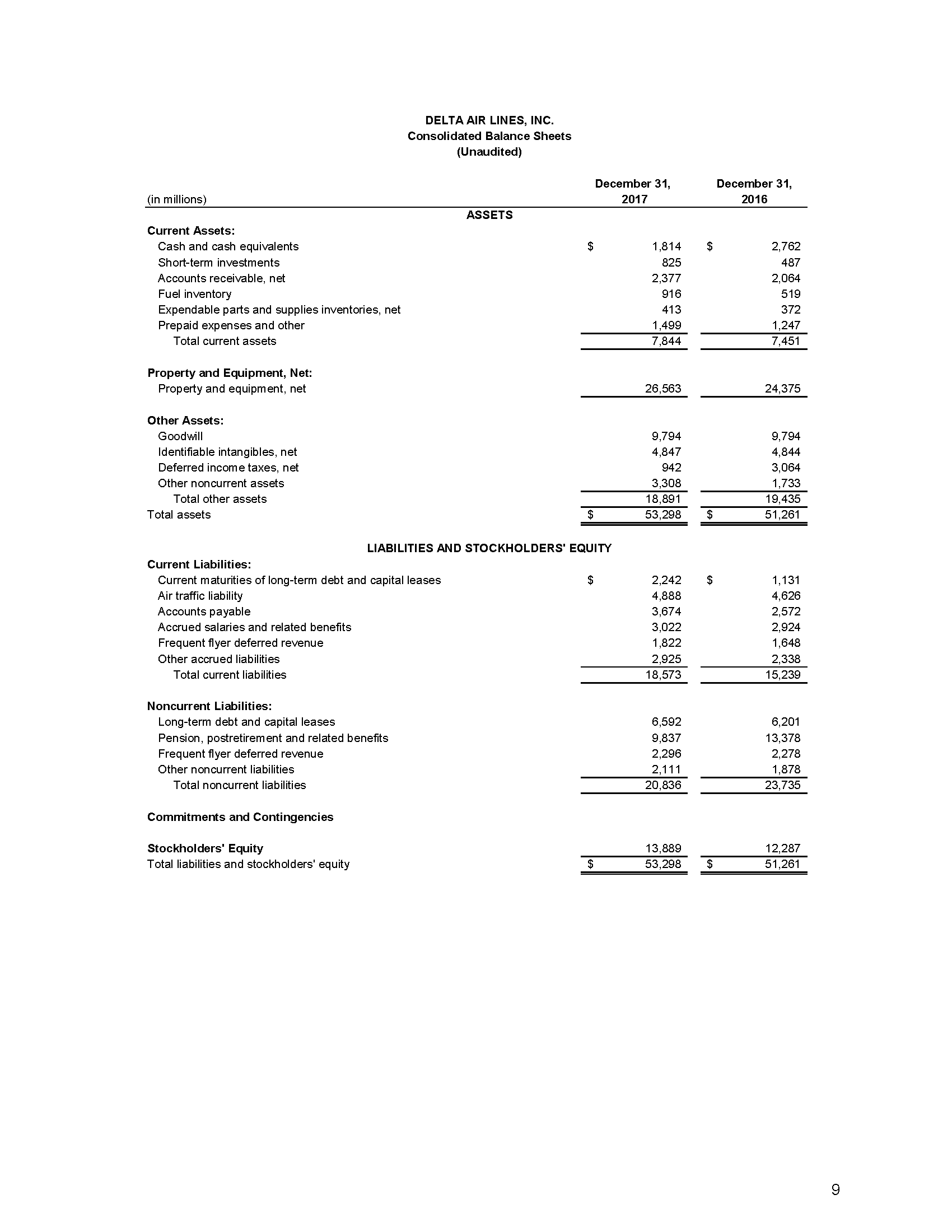 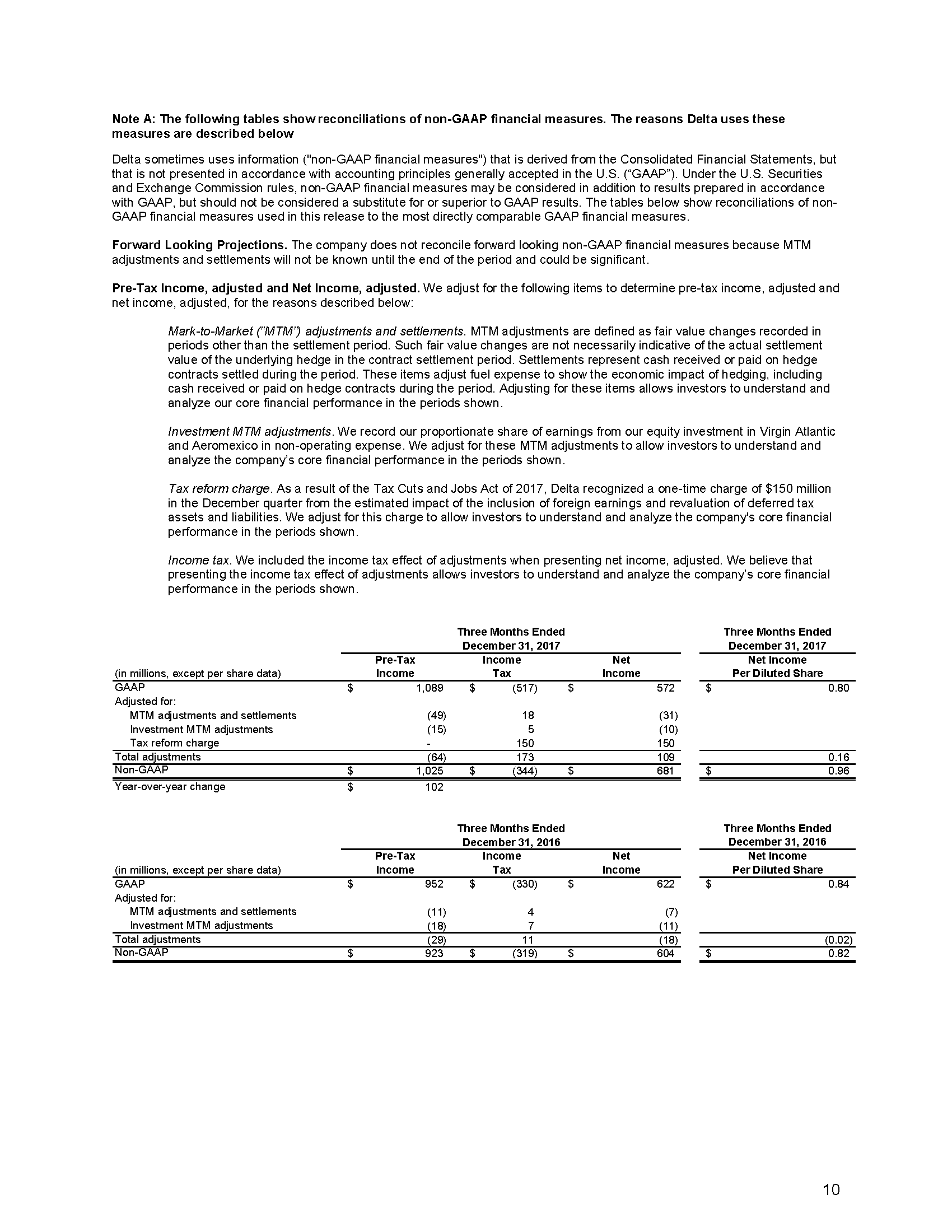 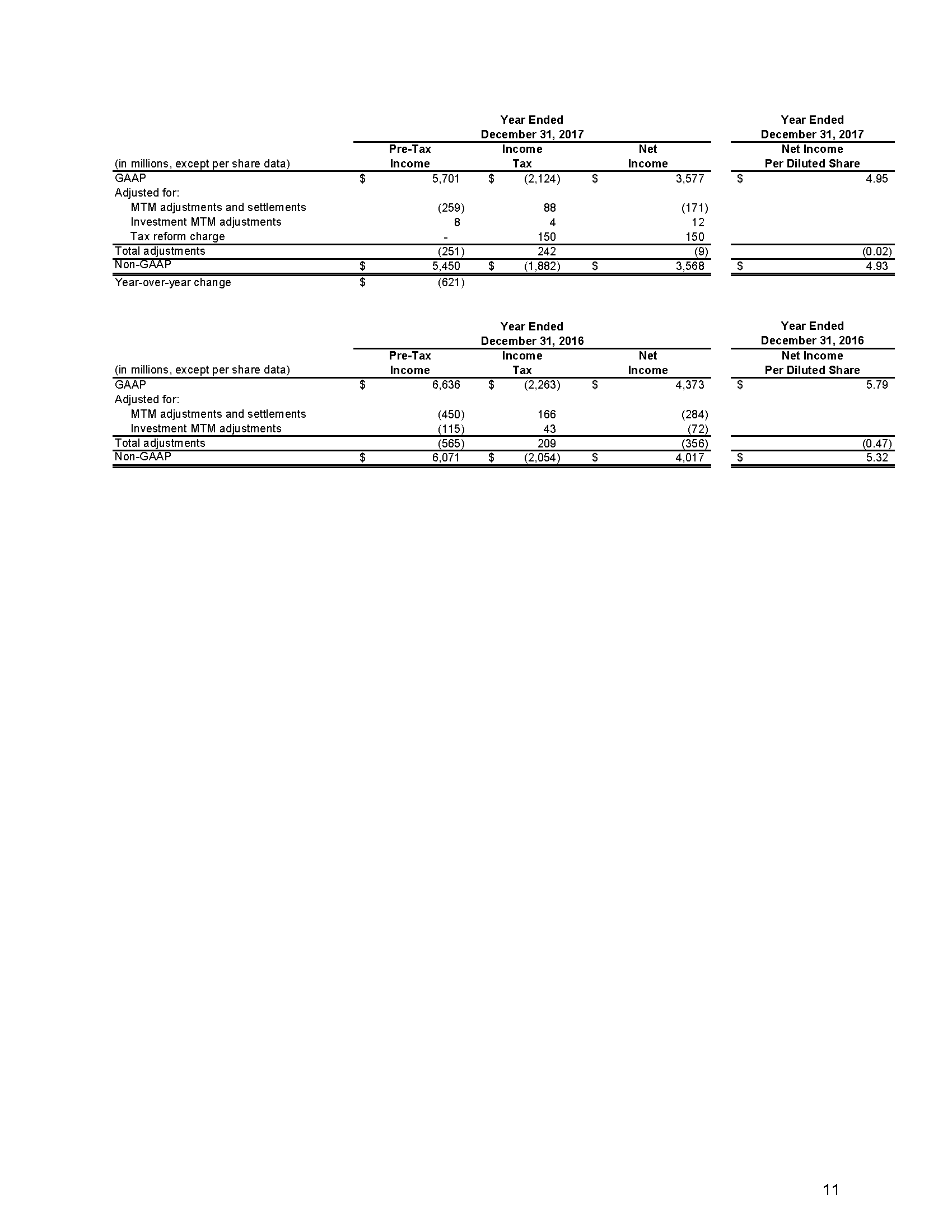 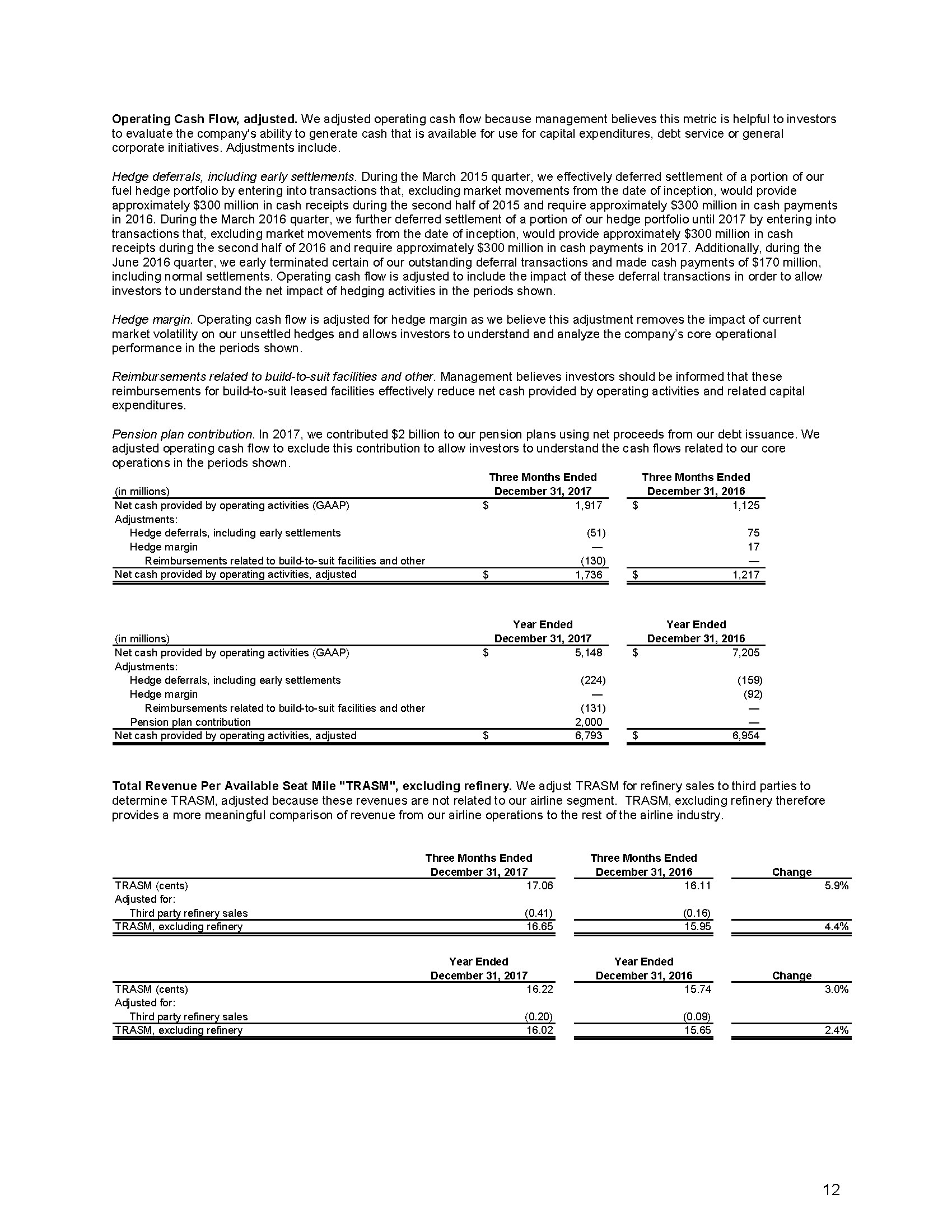 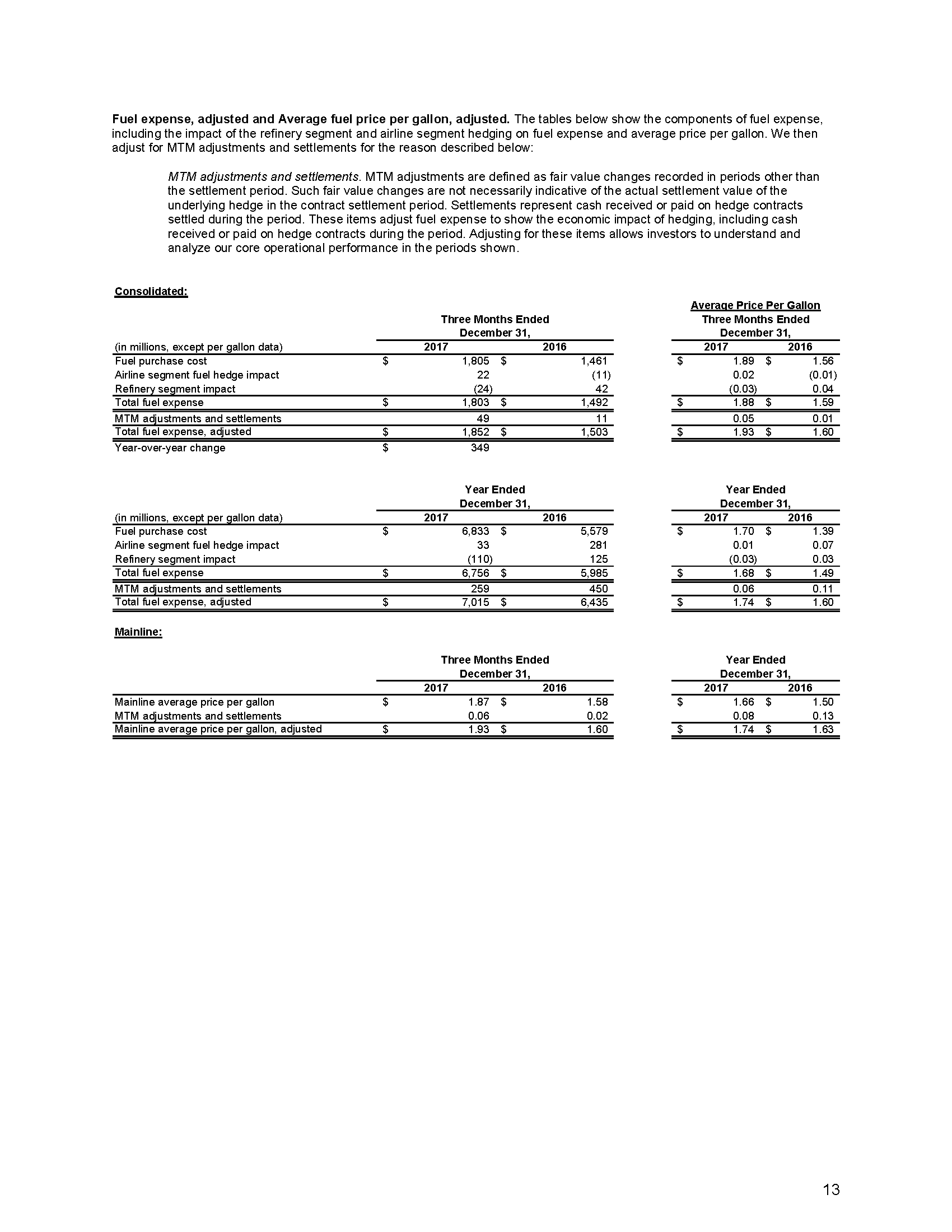 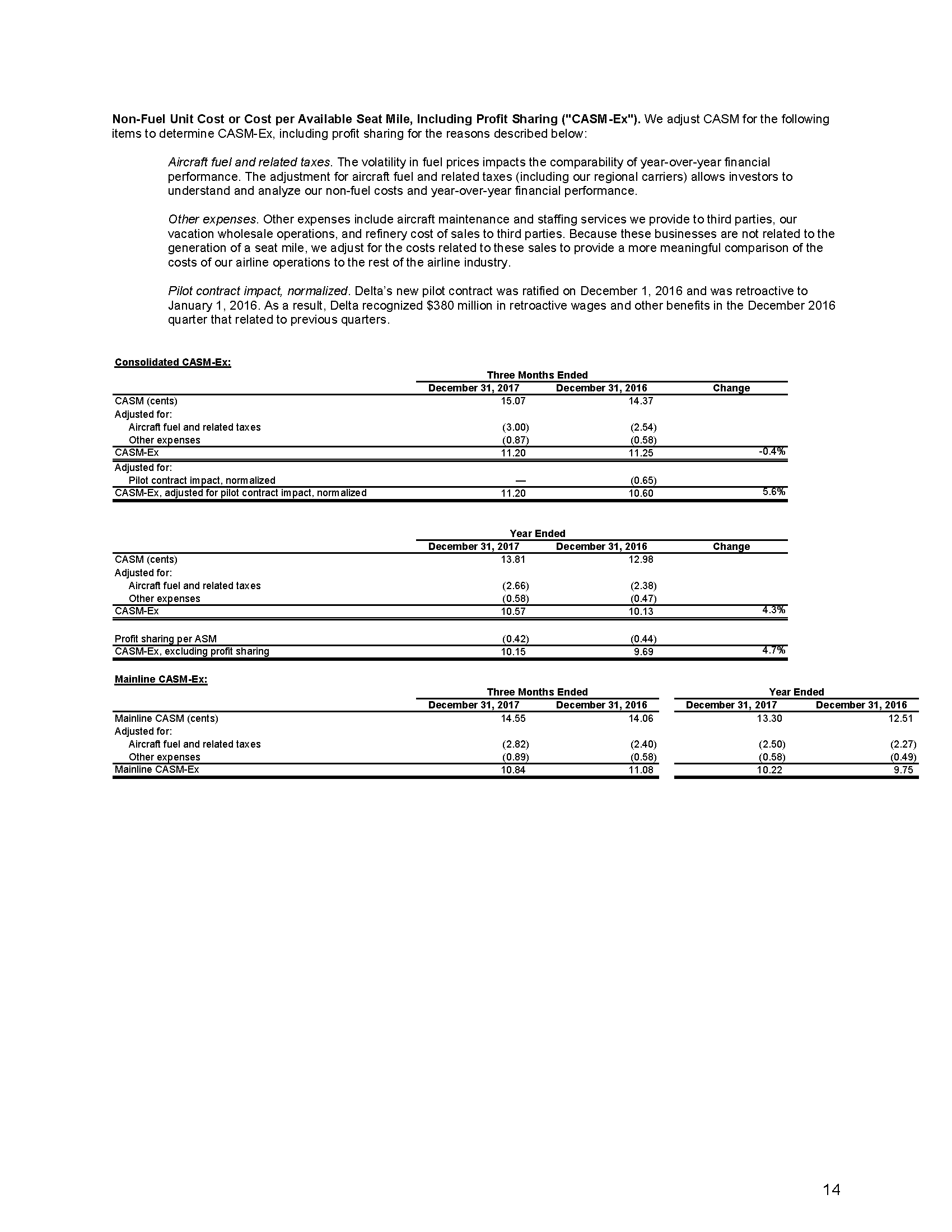 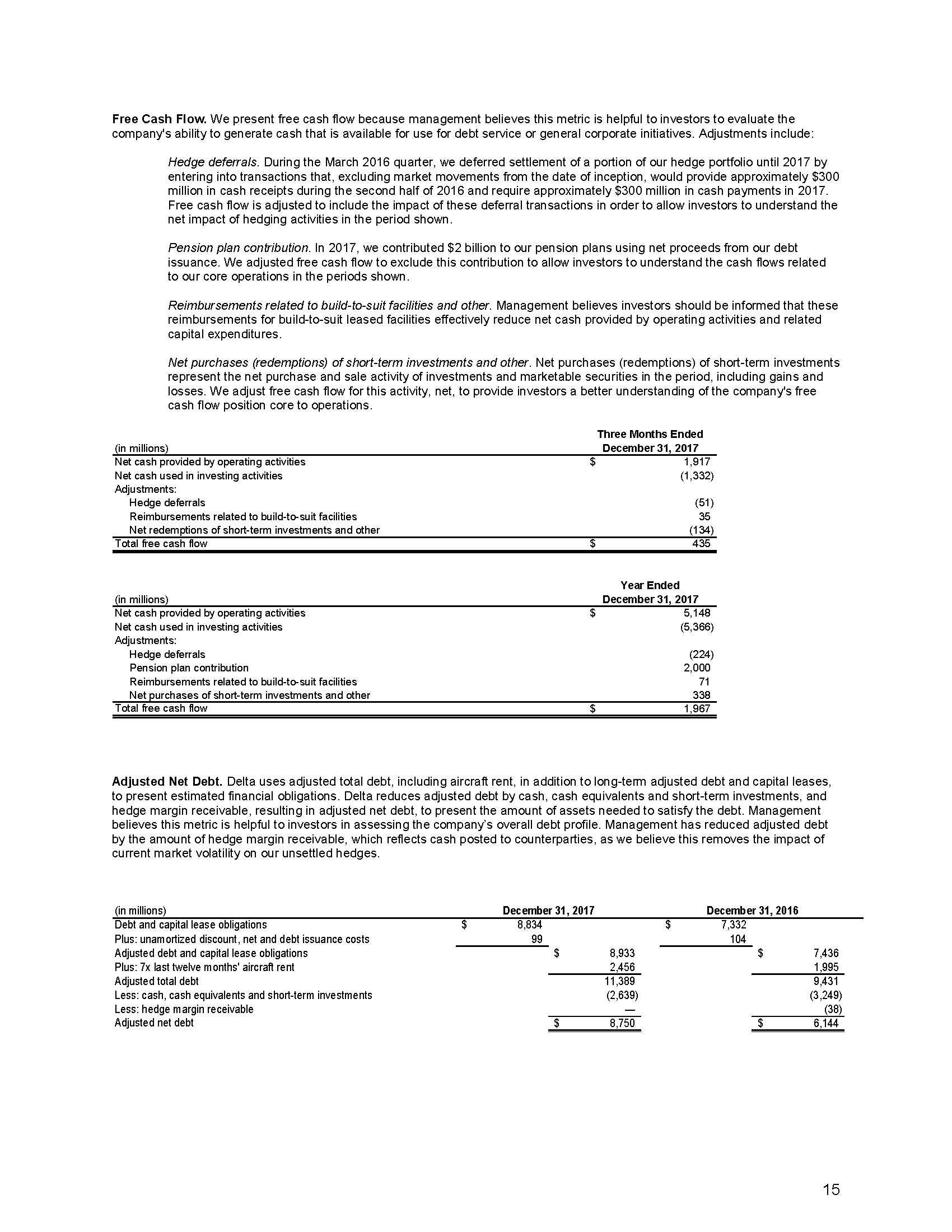