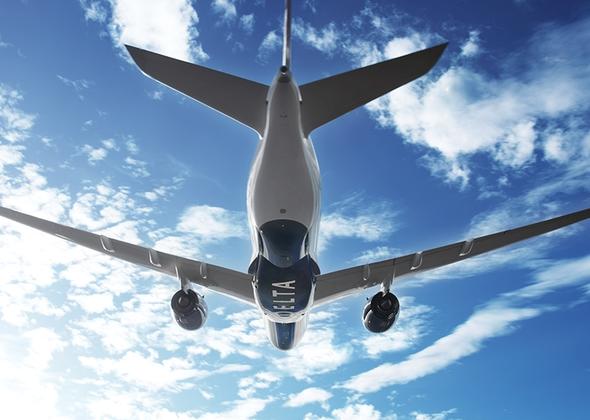 Delta Air Lines today reported financial results for the December quarter and full year 2018.  Highlights of those results, including both GAAP and adjusted metrics, are below and incorporated here.

Adjusted pre-tax income for the December quarter 2018 was $1.2 billion driven by over $700 million of revenue growth, allowing the company to fully recapture the $508 million increase in adjusted fuel expense and produce an 11 percent adjusted pre-tax margin.  Adjusted earnings per share increased by 42 percent year over year to $1.30.

For the full year, adjusted pre-tax income was $5.1 billion, a $137 million decrease relative to 2017 as the company overcame approximately 90 percent of the $2 billion increase in fuel expense.  Full year adjusted earnings per share were $5.65, up 19 percent compared to the prior year as the company recognized benefits from tax reform and a four percent lower share count.

“2018 was a successful year for Delta with record operational reliability, increasing customer satisfaction, and solid financial results in the face of higher fuel costs.  Delta people are the foundation of our success and I am honored to recognize their efforts with $1.3 billion in profit sharing for 2018,” said Ed Bastian, Delta’s chief executive officer.  “As we move into 2019, we expect to drive double-digit earnings growth through higher revenues, maintaining a cost trajectory below inflation, and the modest benefit from lower fuel costs.  Margin expansion is a business imperative and we remain confident in our full-year earnings guidance of $6 to $7 per share.”

For the full year, adjusted operating revenue grew to nearly $44 billion, up eight percent versus prior year on an increasingly diverse revenue base, with 52 percent of revenues from premium products and non-ticket sources.  Premium product ticket revenues increased 14 percent along with double-digit percentage increases from cargo, loyalty, and Maintenance, Repair and Overhaul revenue.

“Delta's strong brand momentum was evident across the business with positive unit revenue growth in all geographic entities for the full year, a record revenue premium to the industry, and double-digit revenue growth from premium products and non-ticket sources,” said Glen Hauenstein, Delta’s president.  “Our March quarter adjusted unit revenue growth is expected to be flat to up two percent including impacts from the timing of Easter, increasing currency headwinds, and the ongoing government shutdown.”

Total adjusted operating expenses for the December quarter increased $803 million versus the prior year quarter, with more than half of the increase driven by higher fuel prices and profit sharing.

CASM-Ex was down 0.5 percent for the December quarter 2018 compared to the prior year period, the strongest cost performance for the year.  For the full year, CASM-Ex increased 1.4 percent, marking an important inflection in the company's cost trajectory with increasing benefits from efficiency initiatives, Delta's fleet transformation and strong performance from operating units.

The company invested $4.7 billion into the business in 2018 including $1.3 billion in the December quarter.  This enabled delivery of 68 new aircraft in 2018, including five Airbus A350s and four Airbus A220s.  The company's ongoing fleet transformation is driving higher customer satisfaction, premium seat growth, and improved cost efficiency.

In 2018, Delta achieved a number of milestones across its five key strategic pillars.

• Received the Glassdoor Employee’s Choice Award for the fourth consecutive year, based entirely on input provided by employees, reiterating the importance of the Delta culture.

• Announced sustainability improvements including removal of a variety of single-use plastic items from Delta’s aircraft and clubs, eliminating more than 300,000 pounds in plastic waste annually.

• Contributed over $50 million to the communities we serve as part of Delta's commitment to give back at least 1% of net profits to charitable organizations.

• Delivered 143 days of zero system cancellations across the combined mainline and Delta Connection operations on a full year basis, up from 90 days in 2017.

• Achieved industry-leading operational performance with mainline on-time performance (A14) of 85.7 percent for the year; and top legacy carrier baggage performance as measured in the latest Department of Transportation report.

• Ranked as the No. 1 U.S. airline by the corporate travel community in the Business Travel News Airline Survey for a historic eighth consecutive year, sweeping all 10 categories.

• Experienced double-digit growth in co-brand spend, helping drive $3.4 billion of incremental value from Delta’s American Express relationship for the full year.  New card acquisitions reached 1 million for the second year in a row and Delta expanded new SkyMiles Members by a record number in one year.

On December 21, 2018, Delta completed a transaction combining DAL Global Services (DGS) with a subsidiary of Argenbright Holdings.  Delta retained a 49 percent equity stake in the combined company.  As a result of the transaction, Delta recognized an approximately $90 million gain in non-operating expense in the December quarter.

For the full year 2018, DGS operations contributed four cents to Delta's earnings per share, after adjusting for profit sharing.  In 2019, Delta will recognize 49 percent of the combined entity's income in operating expense.  The year over year impact on earnings, margins, and non-fuel unit costs are expected to be immaterial.  For guidance purposes, DGS revenues will be excluded in year-over-year calculations for unit and total revenue to reflect core revenue trends in the business.  In 2018, DGS contributed approximately $60 million in revenue per quarter.

In the December quarter, Delta early adopted the new lease accounting standard.  The new standard requires leases to be recorded on the balance sheet as lease liabilities with corresponding right-of-use assets.  The effects of the new standard will be reflected as of January 1, 2018 by recasting prior quarters in the company’s 2018 Form 10-K.  This adoption resulted in the recognition of approximately $6 billion in incremental lease liabilities and right-of-use assets on the balance sheet.

In addition, the adoption increased full year 2018 pre-tax income by approximately $50 million after adjusting for profit sharing, a six cent impact to full year earnings per share.  The impact on the December quarter was immaterial and there is no year over year impact on 2019.

Adjusted results were primarily impacted by unrealized gains/losses on investments.

– Delta serves nearly 200 million people every year, taking customers across its industry-leading global network to more than 300 destinations in over 50 countries.

– Headquartered in Atlanta, Delta offers more than 5,000 daily departures and as many as 15,000 affiliated departures including the premier SkyTeam alliance, of which Delta is a founding member.

– Delta has been recognized as a Fortune’s top 50 Most Admired Companies in addition to being named the most admired airline for the seventh time in eight years. Additionally, Delta has ranked No.1 in the Business Travel News Annual Airline survey for an unprecedented eight consecutive years and for 2018 was named one of Fast Company’s Most Innovative Companies Worldwide.

– As an employer, Delta has been regularly awarded top honors from organizations like Glassdoor and recognized as a top workplace for women and members of the military.  Delta CEO Ed Bastian was named among the “World’s Greatest Leaders” by Fortune magazine in 2018.

– More about Delta can be found on the Delta News Hub as well as delta.com, via @DeltaNewsHub on Twitter and Facebook.com/delta.

Statements in this press release that are not historical facts, including statements regarding our estimates, expectations, beliefs, intentions, projections or strategies for the future, may be "forward-looking statements" as defined in the Private Securities Litigation Reform Act of 1995. All forward-looking statements involve a number of risks and uncertainties that could cause actual results to differ materially from the estimates, expectations, beliefs, intentions, projections and strategies reflected in or suggested by the forward-looking statements. These risks and uncertainties include, but are not limited to, the cost of aircraft fuel; the impact of fuel hedging activity including rebalancing our hedge portfolio, recording mark-to-market adjustments or posting collateral in connection with our fuel hedge contracts; the availability of aircraft fuel; the performance of our significant investments in airlines in other parts of the world; the possible effects of accidents involving our aircraft; breaches or security lapses in our information technology systems; disruptions in our information technology infrastructure; our dependence on technology in our operations; the restrictions that financial covenants in our financing agreements could have on our financial and business operations; labor issues; the effects of weather, natural disasters and seasonality on our business; the effects of an extended disruption in services provided by third party regional carriers; failure or inability of insurance to cover a significant liability at Monroe’s Trainer refinery; the impact of environmental regulation on the Trainer refinery, including costs related to renewable fuel standard regulations; our ability to retain senior management and key employees; damage to our reputation and brand if we are exposed to significant adverse publicity through social media; the effects of terrorist attacks or geopolitical conflict; competitive conditions in the airline industry; interruptions or disruptions in service at major airports at which we operate; the effects of extensive government regulation on our business; the sensitivity of the airline industry to prolonged periods of stagnant or weak economic conditions; uncertainty in economic conditions and regulatory environment in the United Kingdom related to the exit of the United Kingdom from the European Union; and the effects of the rapid spread of contagious illnesses.

Additional information concerning risks and uncertainties that could cause differences between actual results and forward-looking statements is contained in our Securities and Exchange Commission filings, including our Annual Report on Form 10-K for the fiscal year ended December 31, 2017 and our Form 10-Q for the quarterly period ended March 31, 2018. Caution should be taken not to place undue reliance on our forward-looking statements, which represent our views only as of January 15, 2019, and which we have no current intention to update. 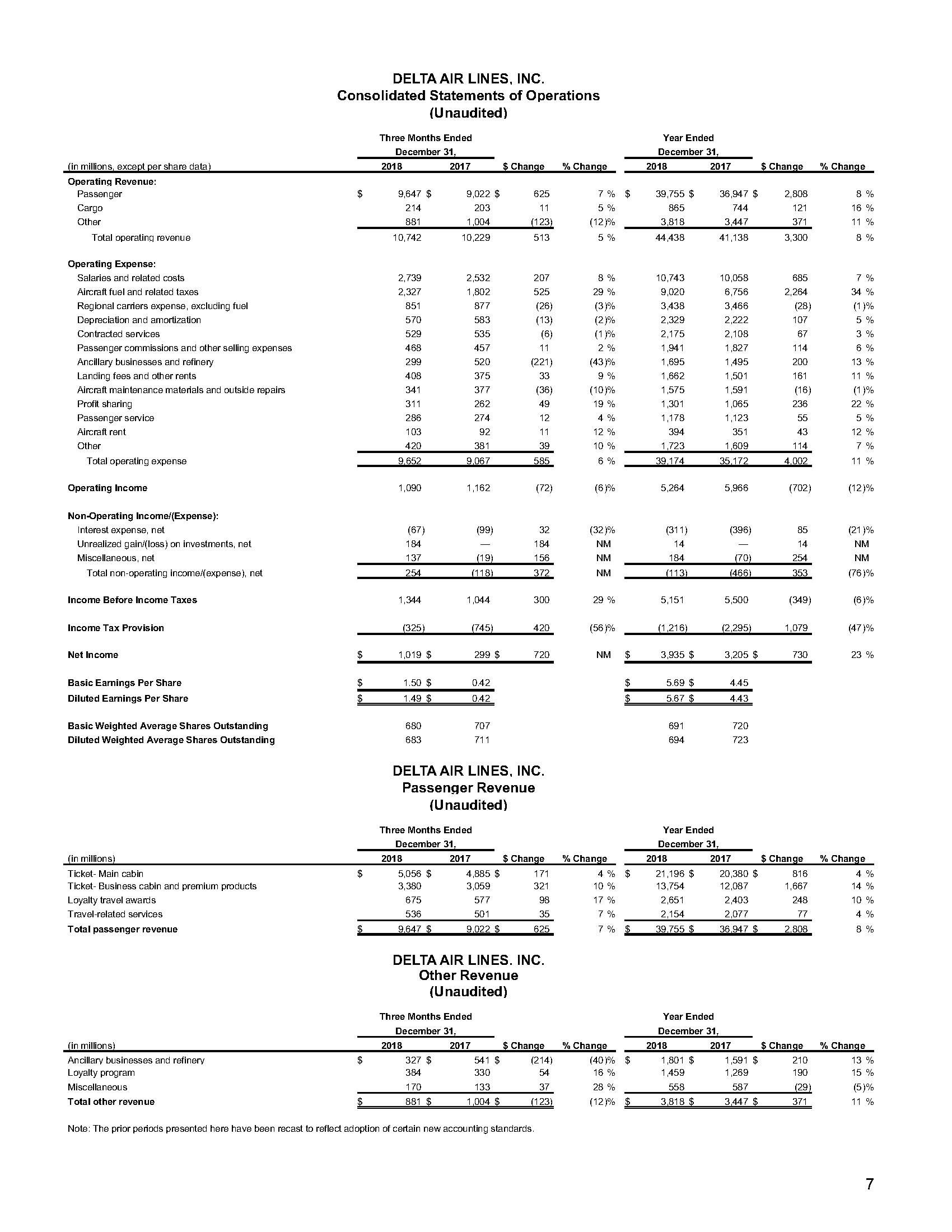 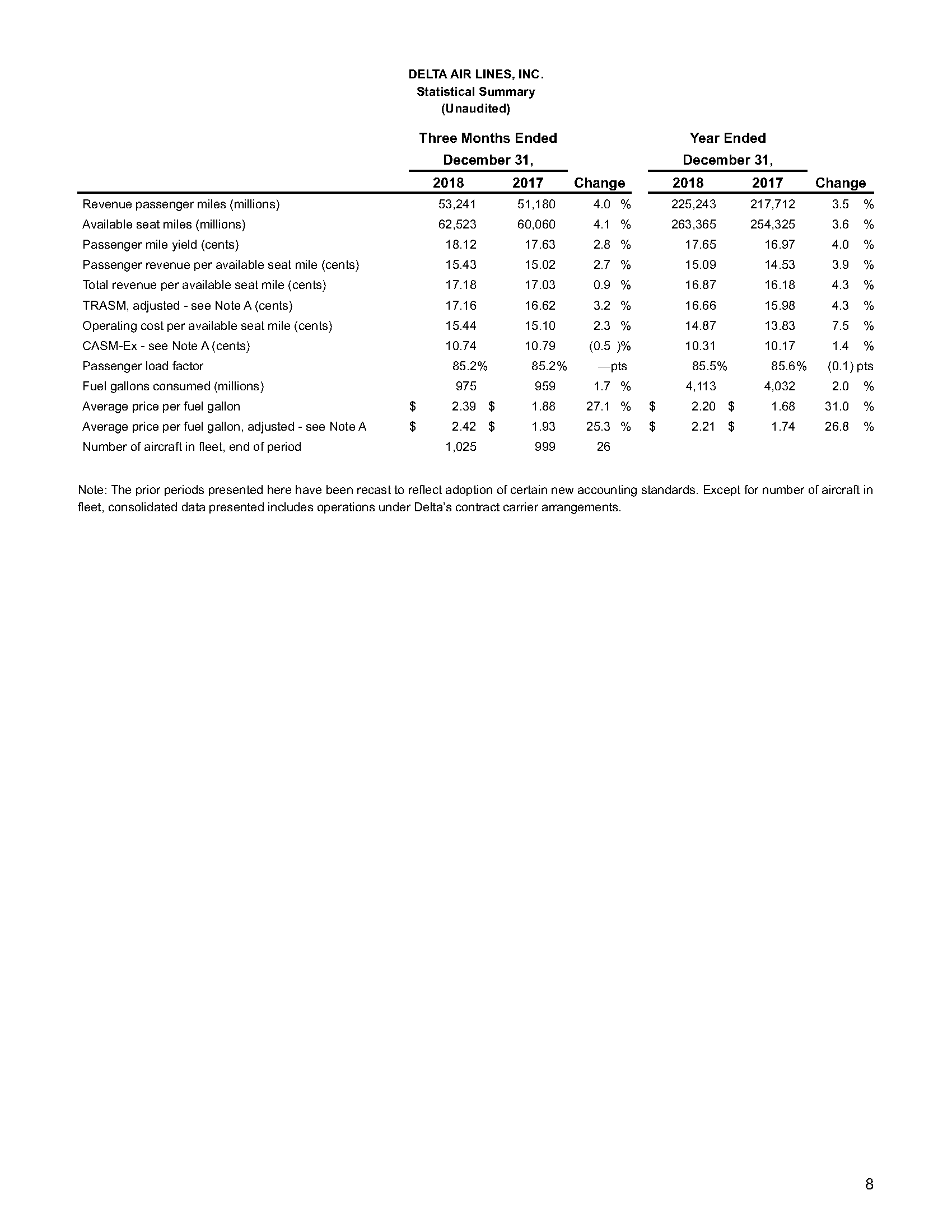 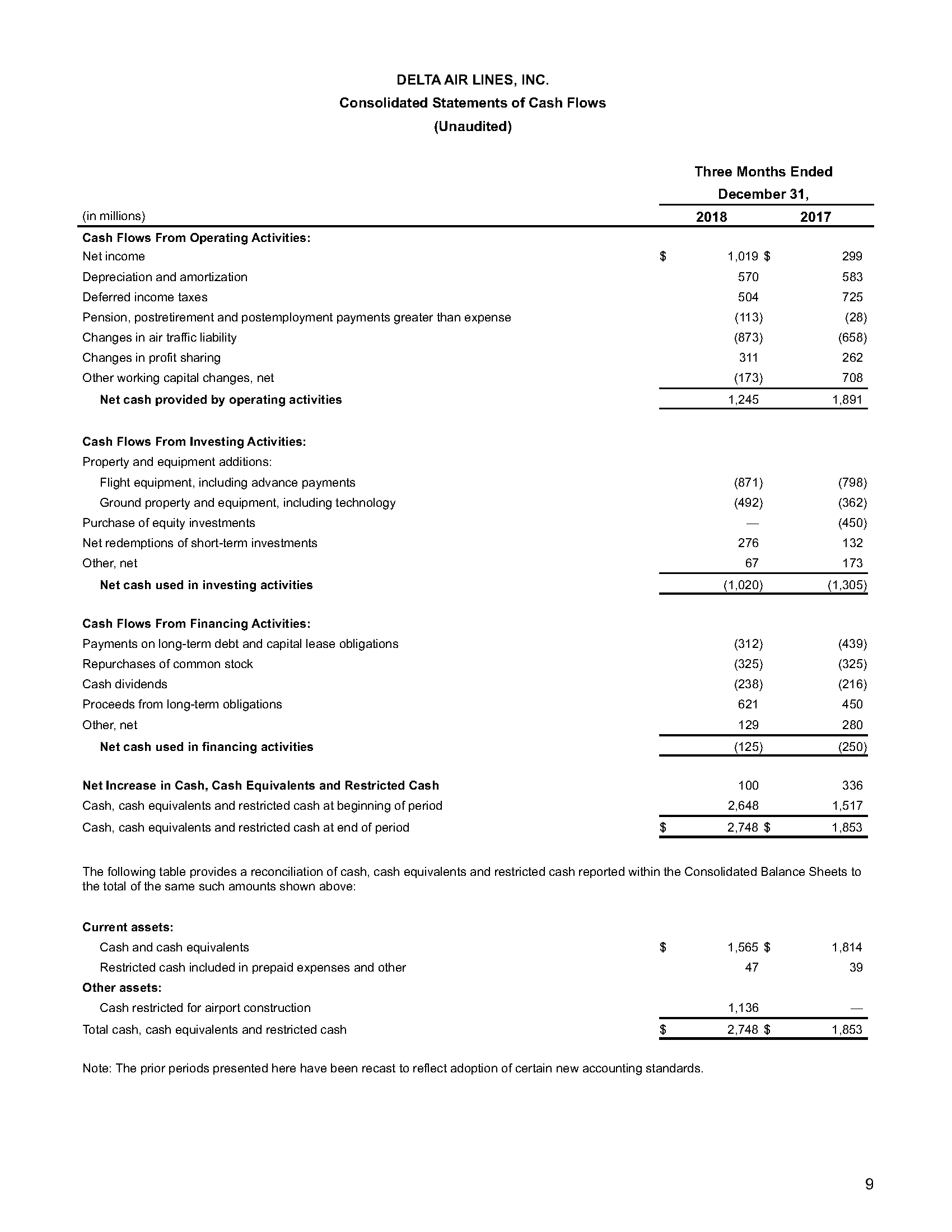 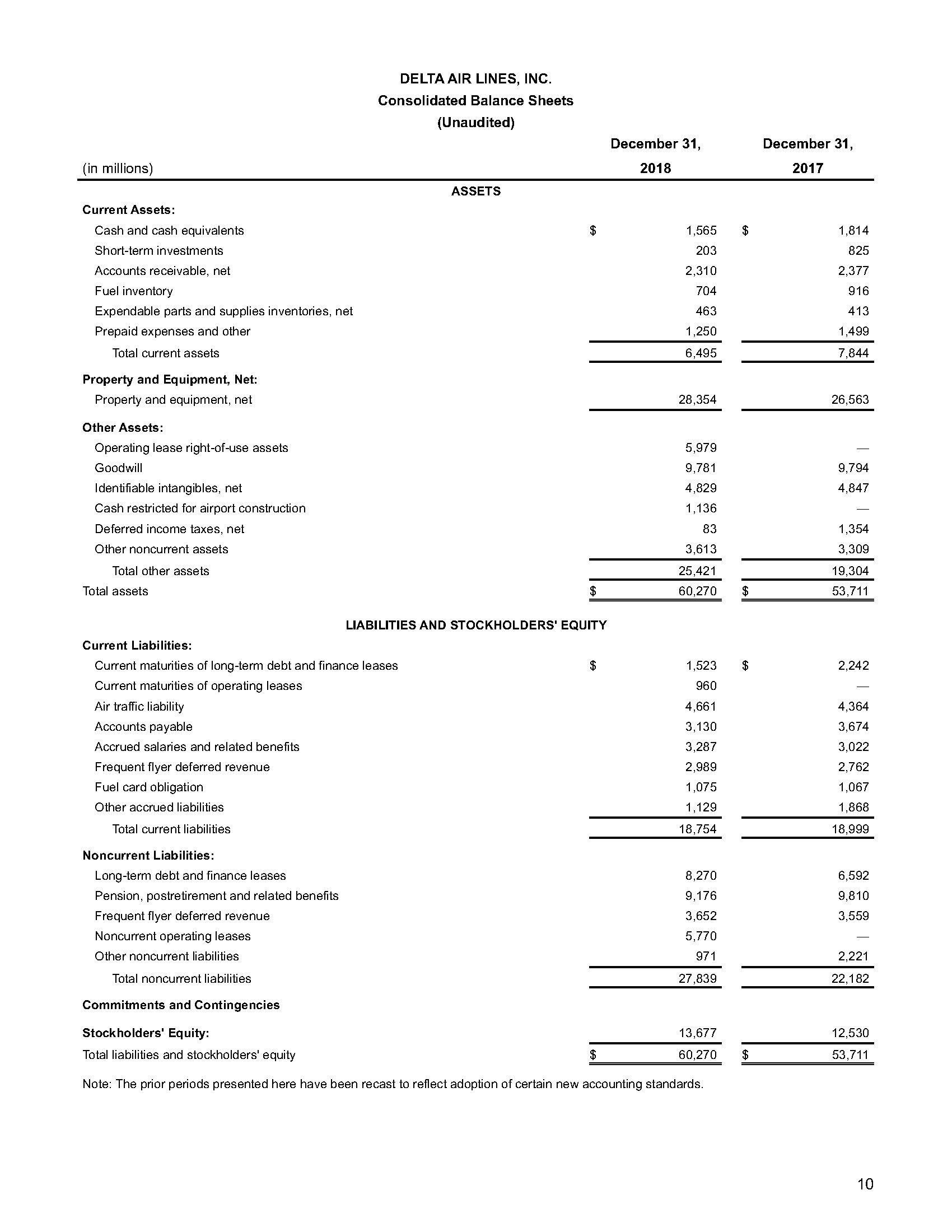 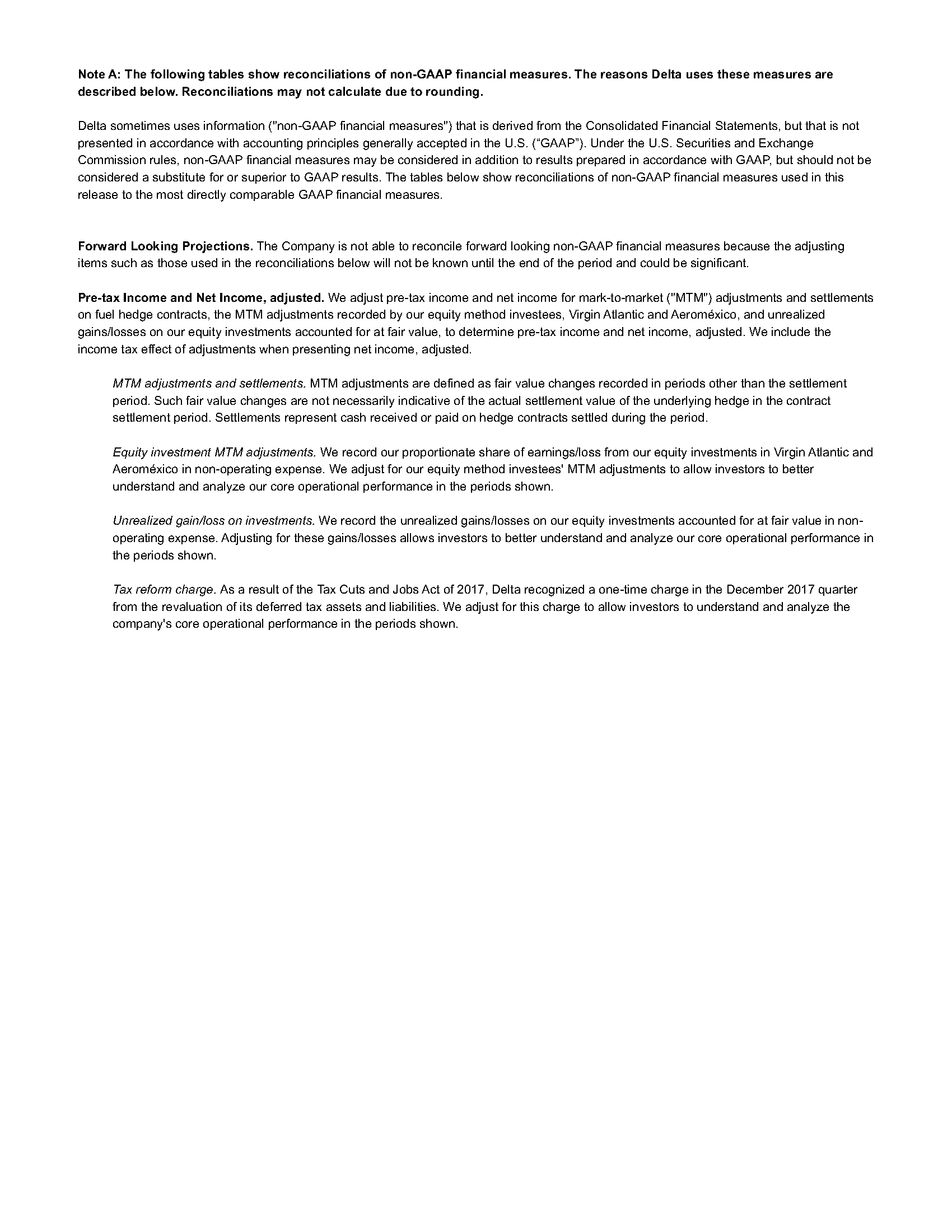 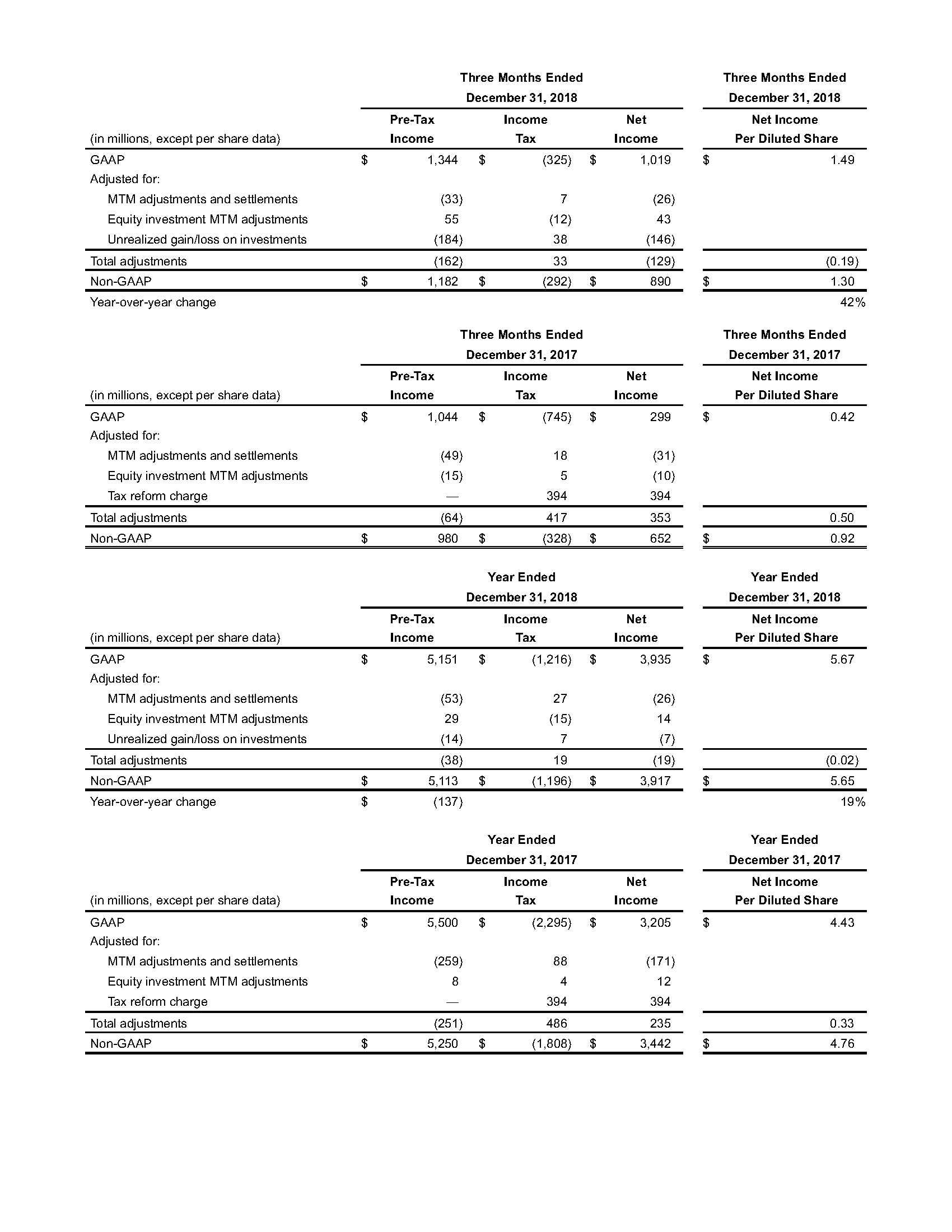 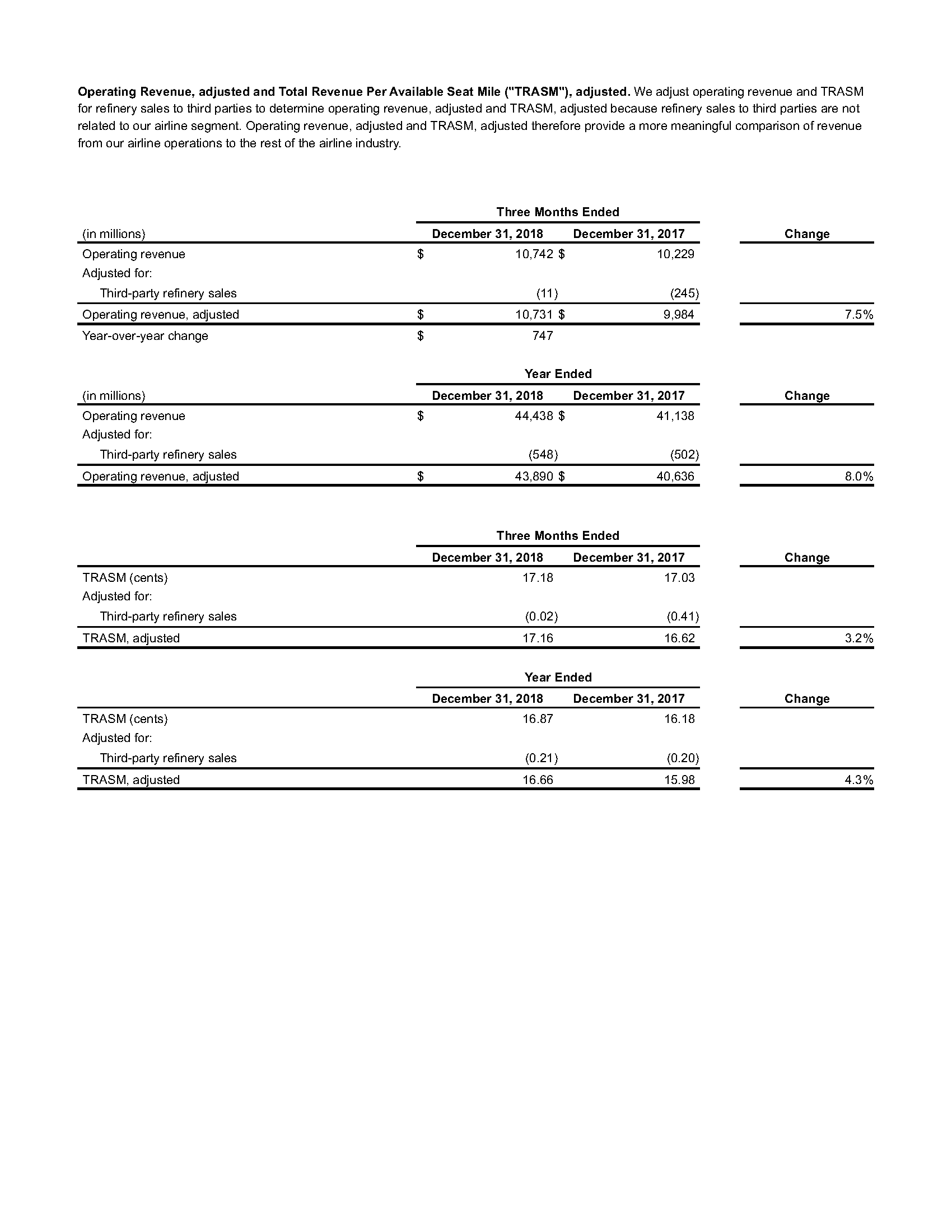 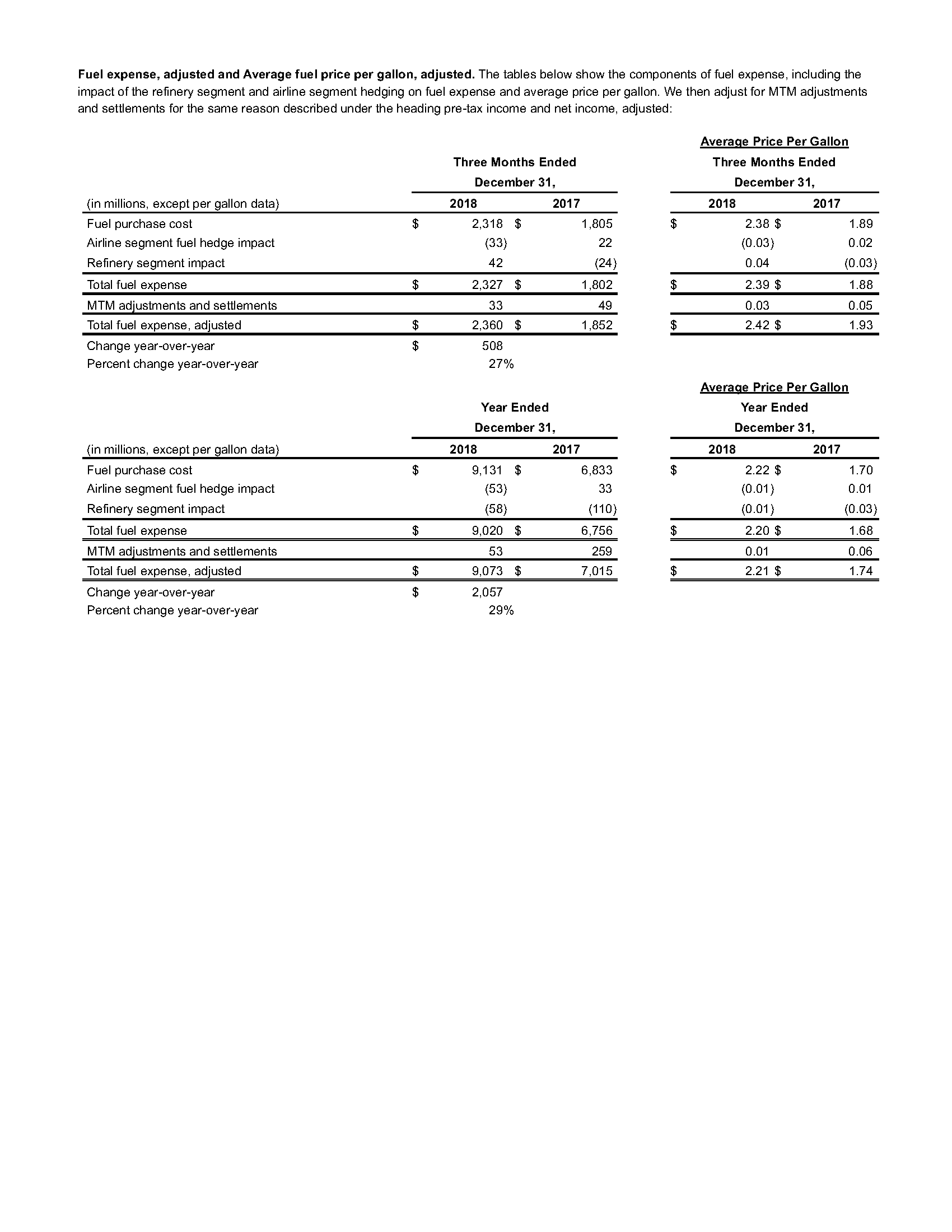 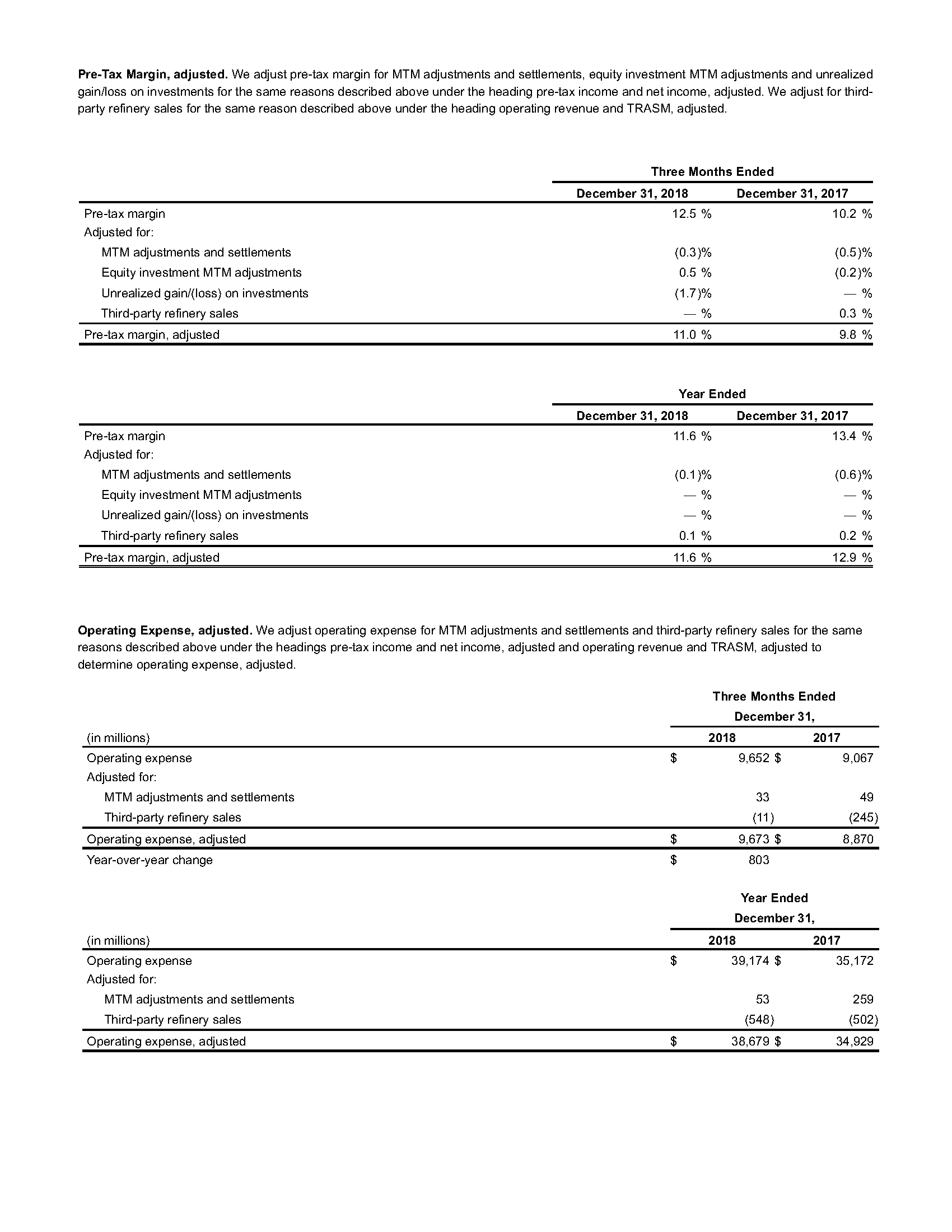 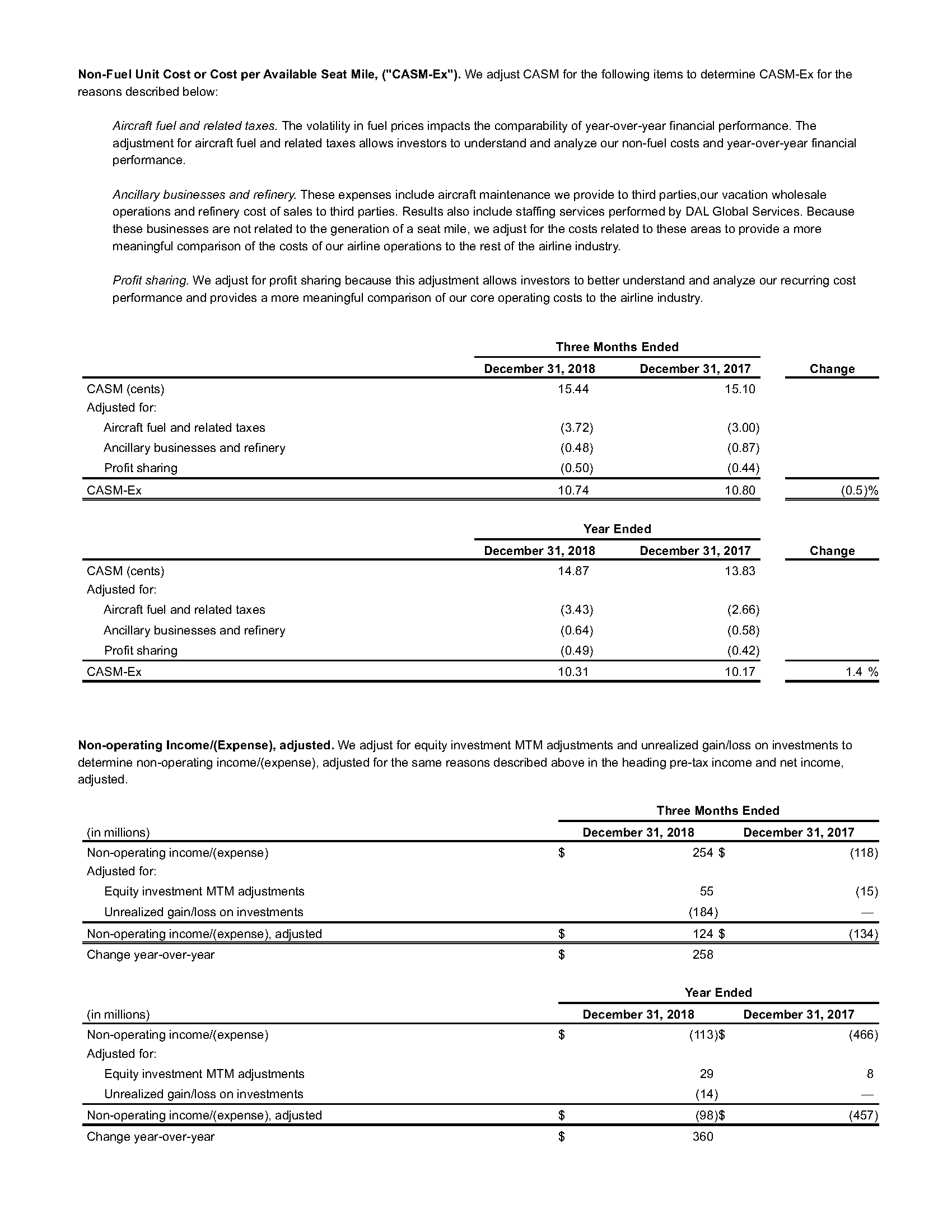 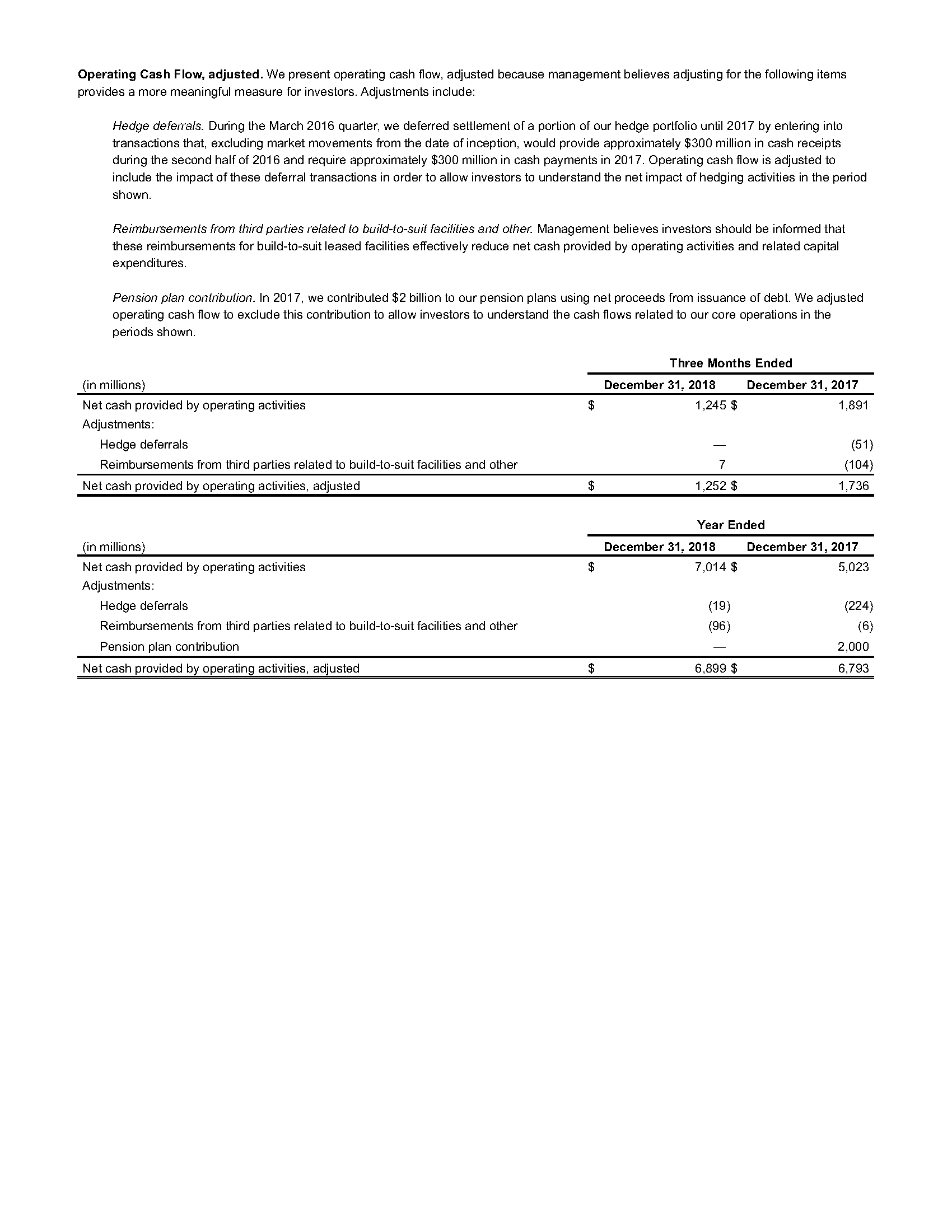 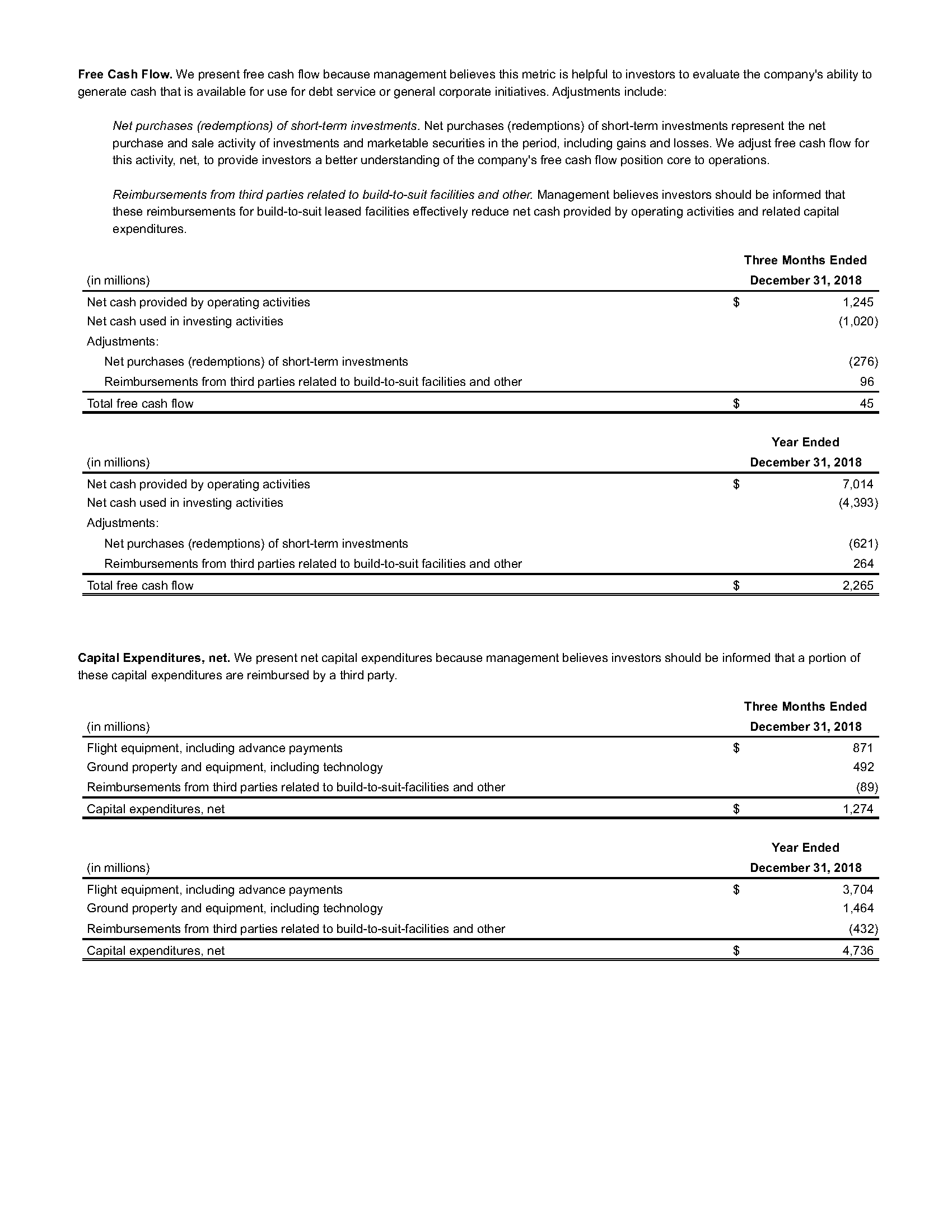 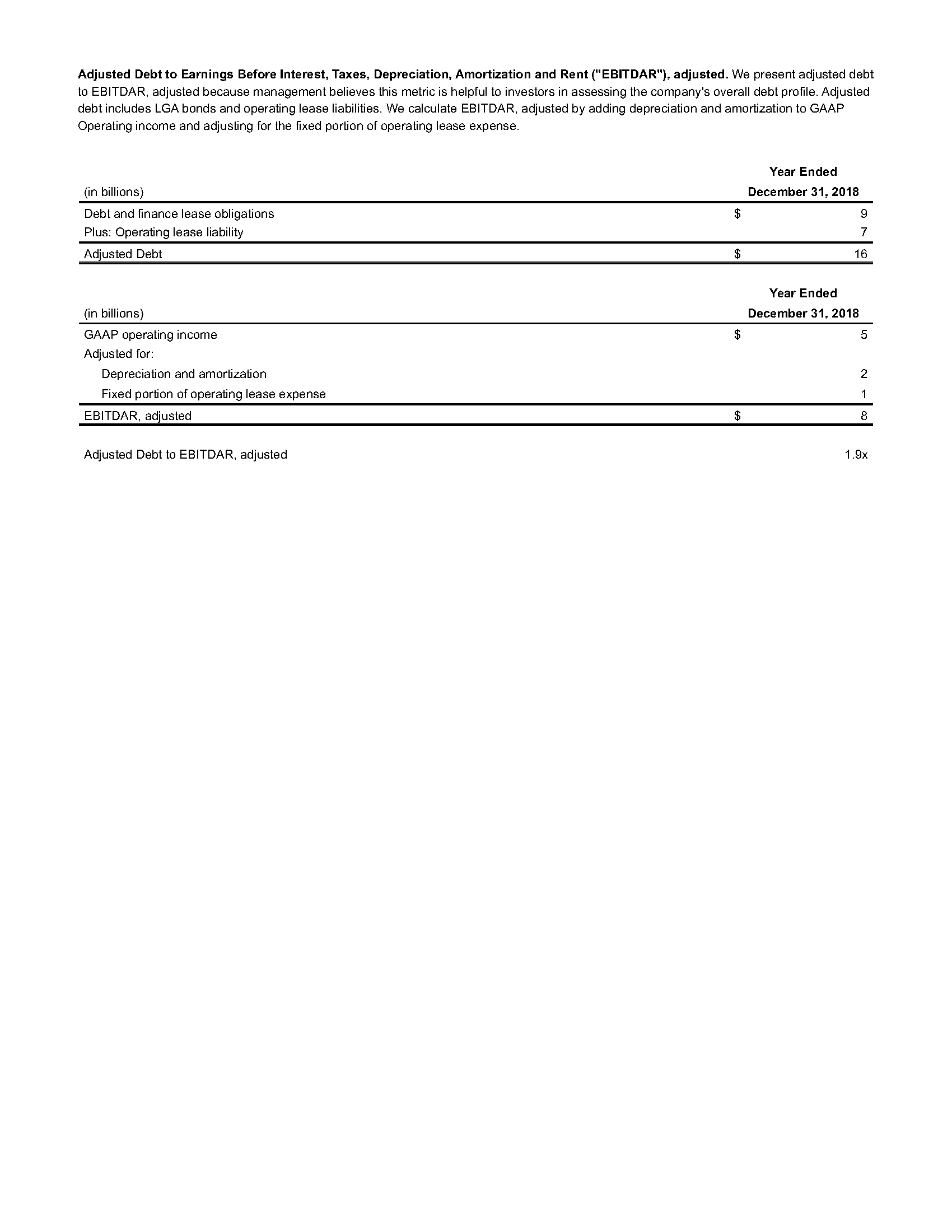