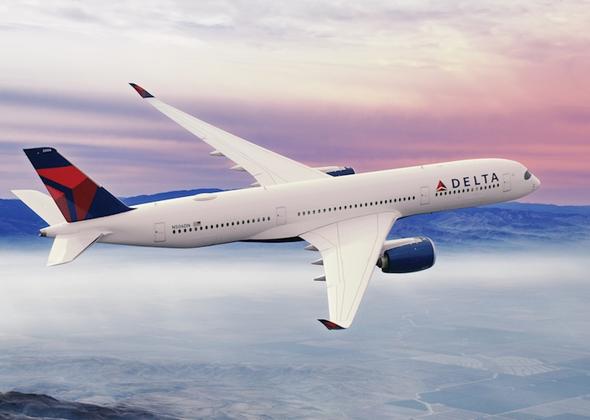 “Our record June quarter financial and operating results demonstrate that we are translating our powerful brand and competitive advantages into earnings growth, margin expansion and solid returns for our owners.  Our people are the best in the business and I’m proud to recognize their hard work and dedication this quarter with an additional $518 million toward next year’s profit sharing,” said Ed Bastian, Delta’s chief executive officer.  “With our strong first half performance and building momentum from our customer-focused initiatives, we are increasing our full-year earnings guidance to $6.75 to $7.25 per share.”

Delta’s adjusted operating revenue of $12.5 billion for the June quarter improved 8.7 percent, $1 billion higher than prior year quarter. This revenue result marks a record for the company, driven by improvements across Delta’s business, including a ten percent increase in premium product ticket revenue and double-digit percentage increases in loyalty and third-party maintenance revenue.  Cargo revenue during the quarter declined 17 percent driven by lower volumes and yield.  Other revenue declined by $24 million as growth in loyalty and third-party maintenance was offset by $176 million lower third-party refinery sales.

“With record passenger loads, customer satisfaction and $1 billion in revenue growth for the June quarter, demand for Delta’s customer-focused product and service has never been stronger.  Our third quarter is off to a great start with a new highest revenue day on record on July 7th,” said Glen Hauenstein, Delta’s president.  “We now expect revenue growth of six to seven percent for the year, a $3 billion increase over 2018, as we benefit from our multi-year pipeline of fleet, product, and loyalty initiatives.”

Total adjusted operating expense for the June quarter increased $559 million versus the prior year quarter, with approximately 20% due to higher profit sharing expense.  CASM-Ex was up 1.4 percent for the June quarter 2019 compared to the prior year quarter.  This performance was driven by industry-leading operations, savings from the company’s fleet transformation and the One Delta efficiency initiative, which partially offset investments in our people and product.  During the quarter, the company decided to accelerate retirement of its MD-90 fleet by two years to the end of 2022, which pressured CASM-Ex by approximately $60 million due to higher depreciation expense.

Adjusted fuel expense decreased $35 million, down two percent, relative to June quarter 2018.  Delta’s adjusted fuel price per gallon for the June quarter was $2.08, which includes a $37 million benefit from the refinery.

Adjusted non-operating expense for the quarter was $60 million higher versus the prior year quarter, driven primarily by lower pension income and lower results from international equity partners.

For the June quarter, Delta returned $497 million to shareholders, comprised of $268 million of share repurchases and $229 million in dividends.  The company also completed repayment of the $1 billion short-term loan that was used to accelerate the repurchase of shares in the March quarter.

The Board of Directors today declared a quarterly dividend of $0.4025 per share, an increase of 15% over previous levels. This marks the sixth consecutive increase in Delta’s dividend since it was established in 2013.  The September quarter dividend will be payable to shareholders of record as of the close of business on July 25, 2019, to be paid on August 15, 2019.

“With efficiency gains from our operations, fleet transformation, and One Delta initiatives, we have solid line of sight to achieve our 1% cost growth target for the year,” said Paul Jacobson, Delta’s chief financial officer.  “Our strong financial foundation and cash generation allow us to sustainably invest in the business, while maintaining our investment grade balance sheet and consistently returning cash to shareholders.  With our cash flow exceeding original expectations, we are on track to return $3 billion to our owners this year through share repurchases and our increased dividend.”

In the June quarter, Delta achieved a number of milestones across its five key strategic pillars.

Additional information concerning risks and uncertainties that could cause differences between actual results and forward-looking statements is contained in our Securities and Exchange Commission filings, including our Annual Report on Form 10-K for the fiscal year ended December 31, 2018.  Caution should be taken not to place undue reliance on our forward-looking statements, which represent our views only as of July 11, 2019, and which we have no current intention to update. 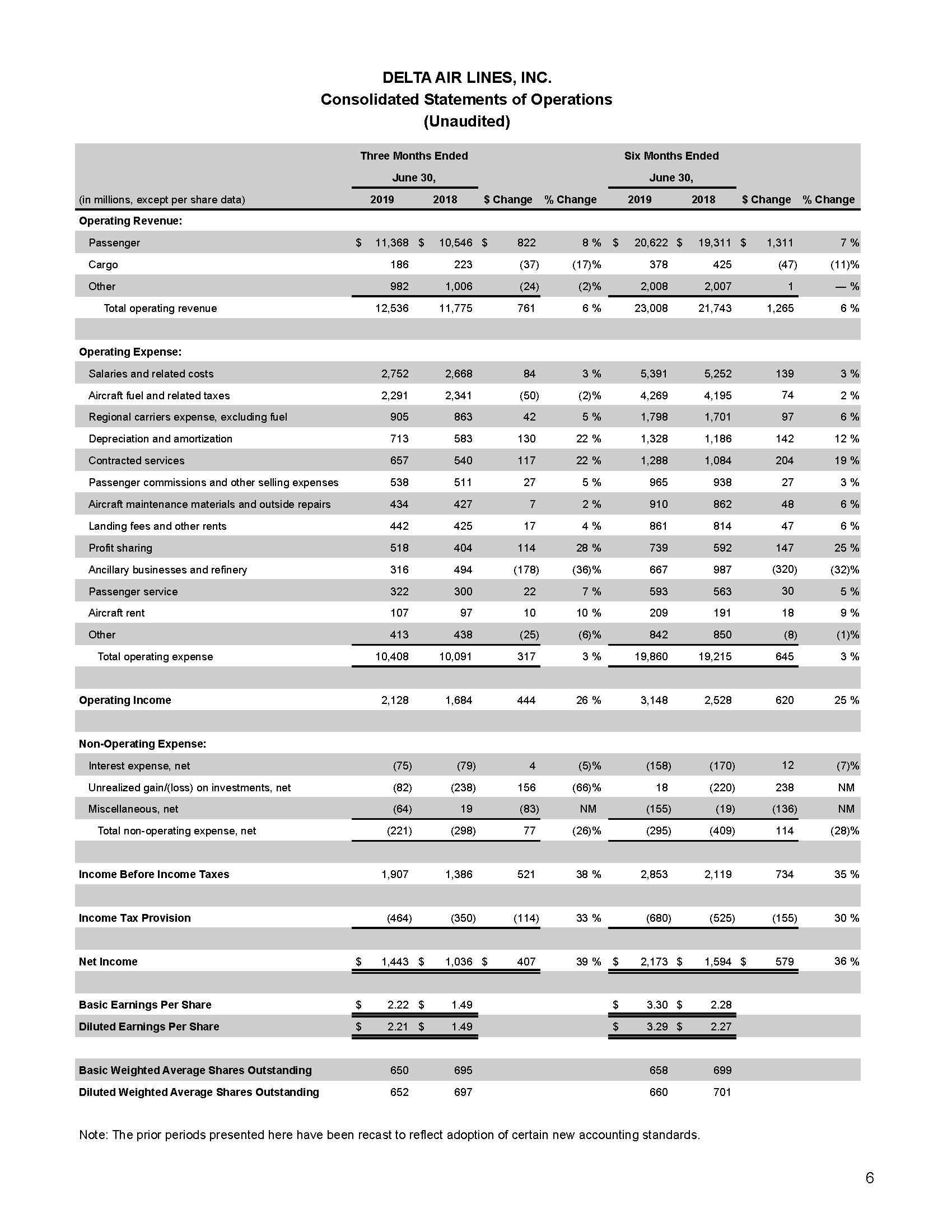 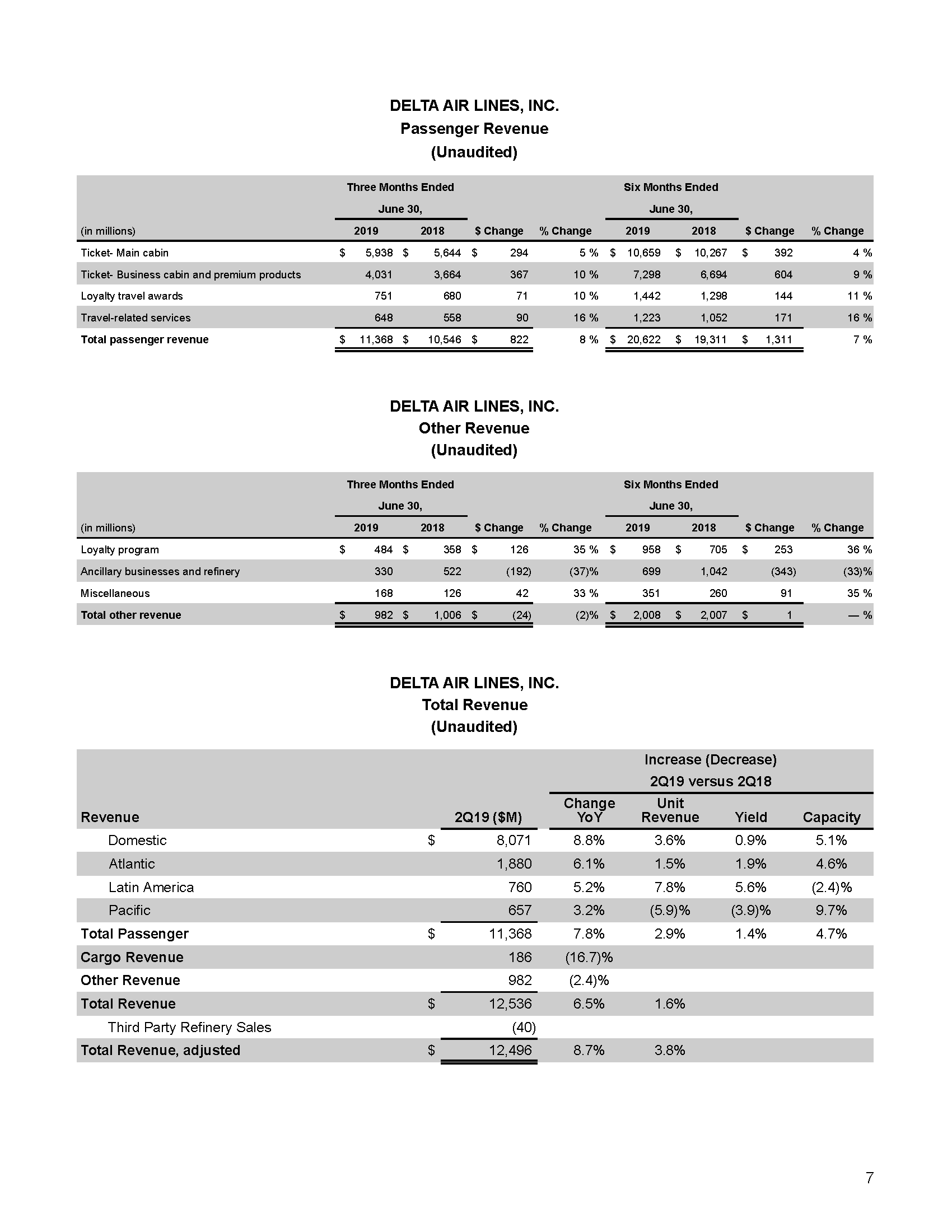 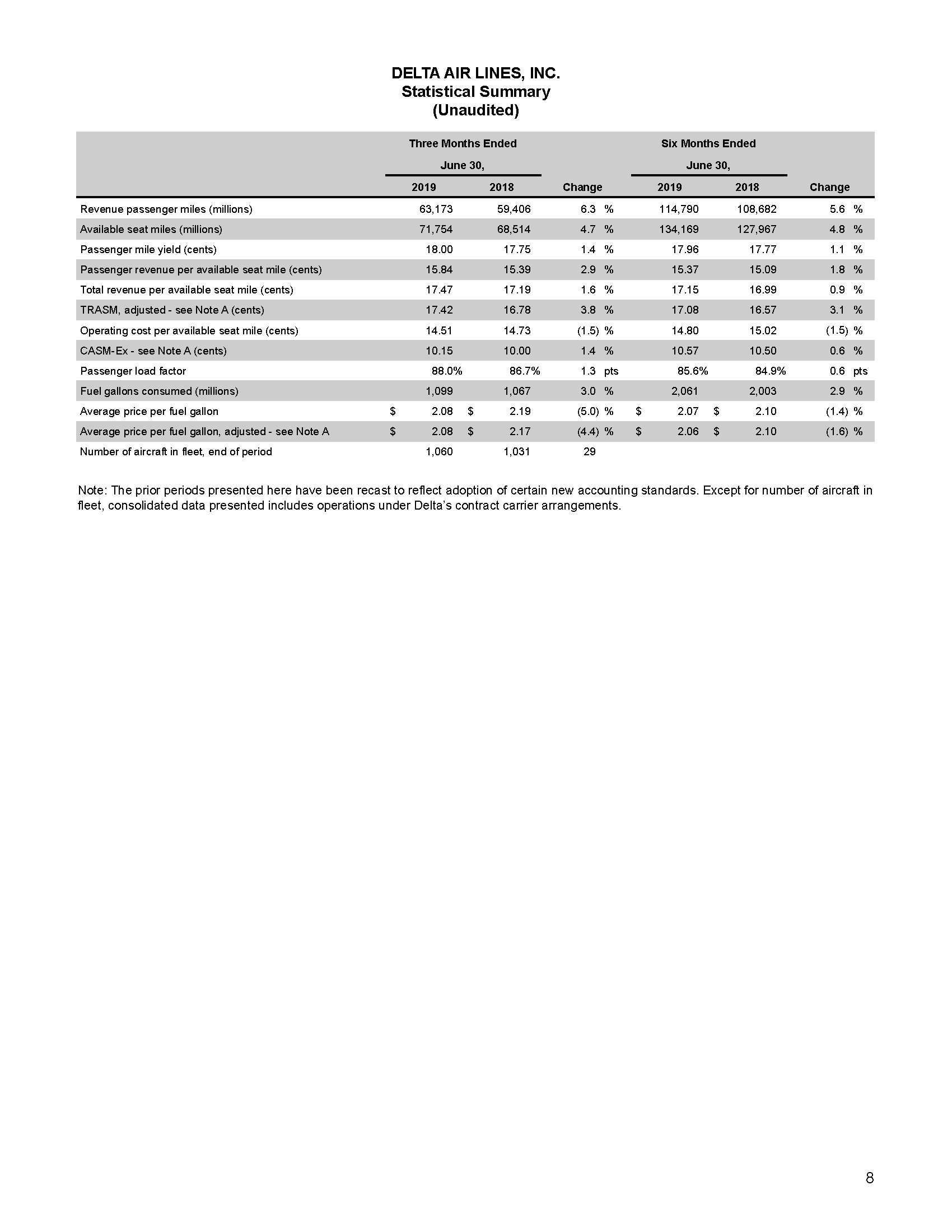 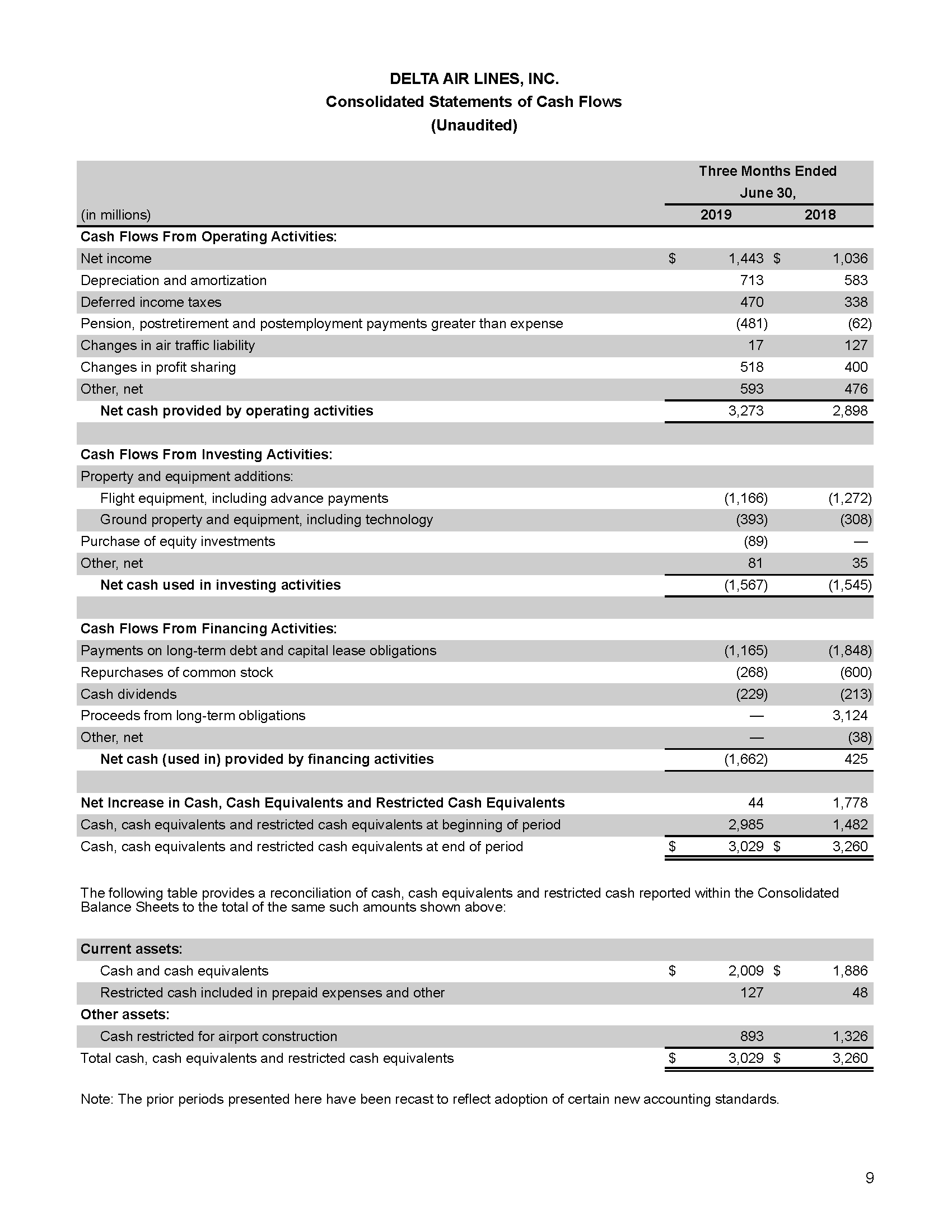 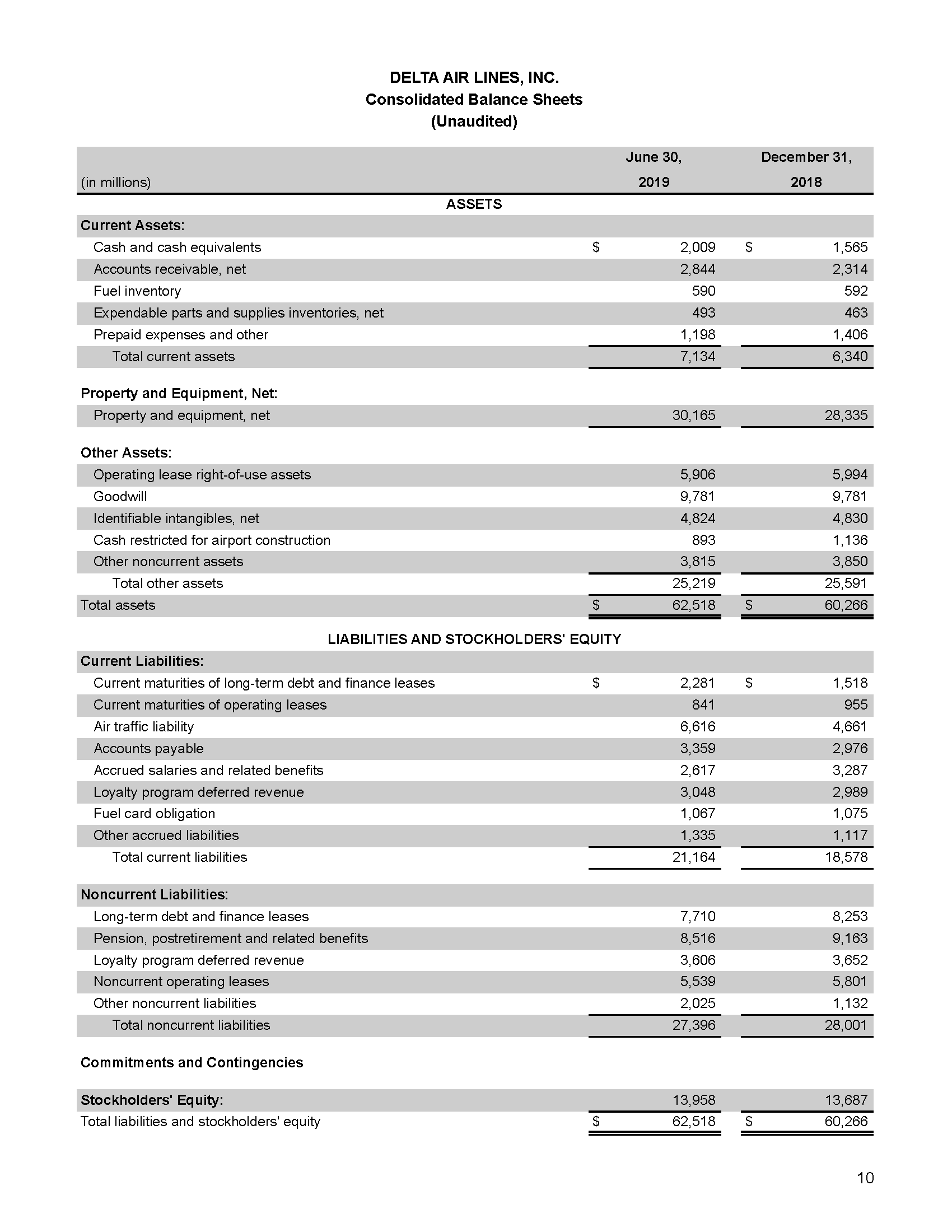 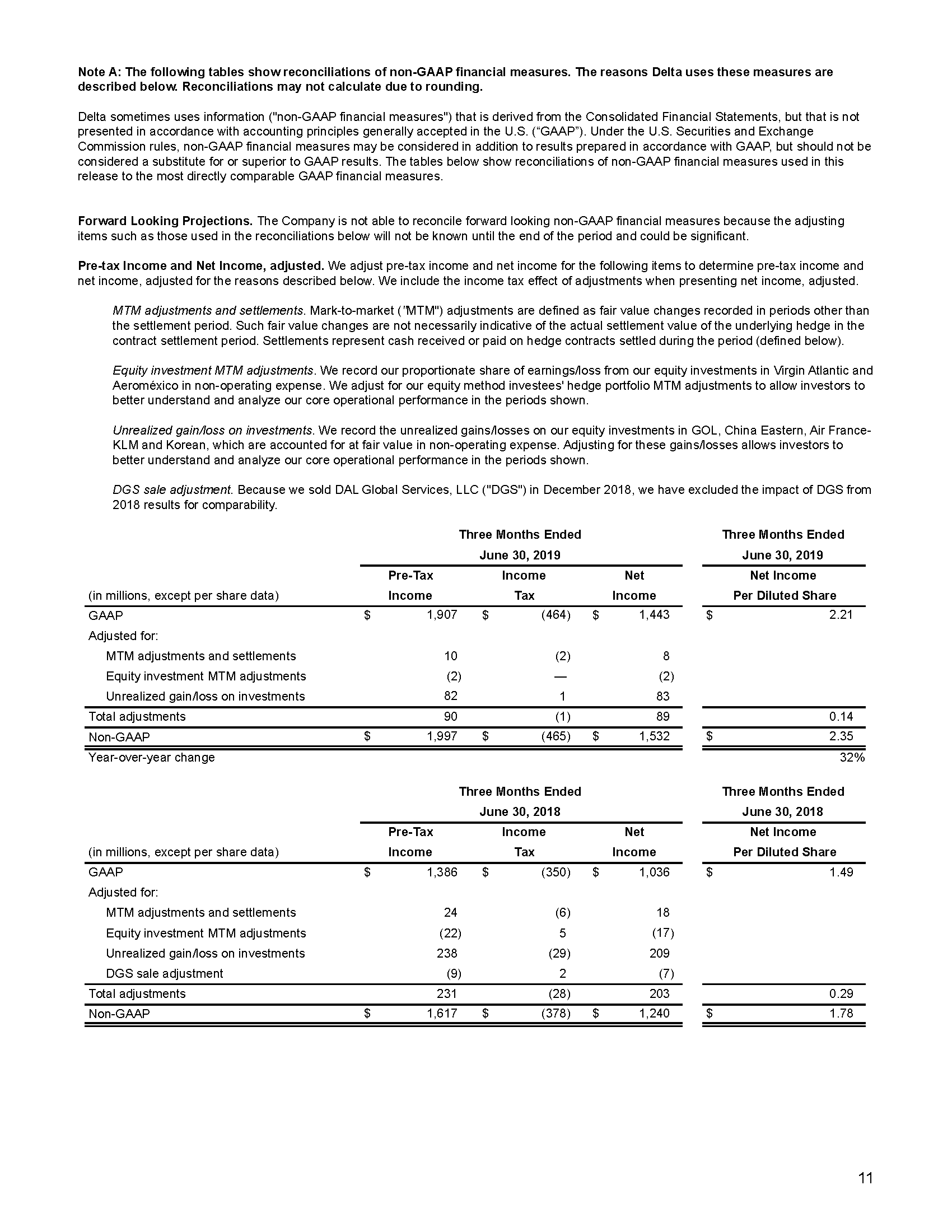 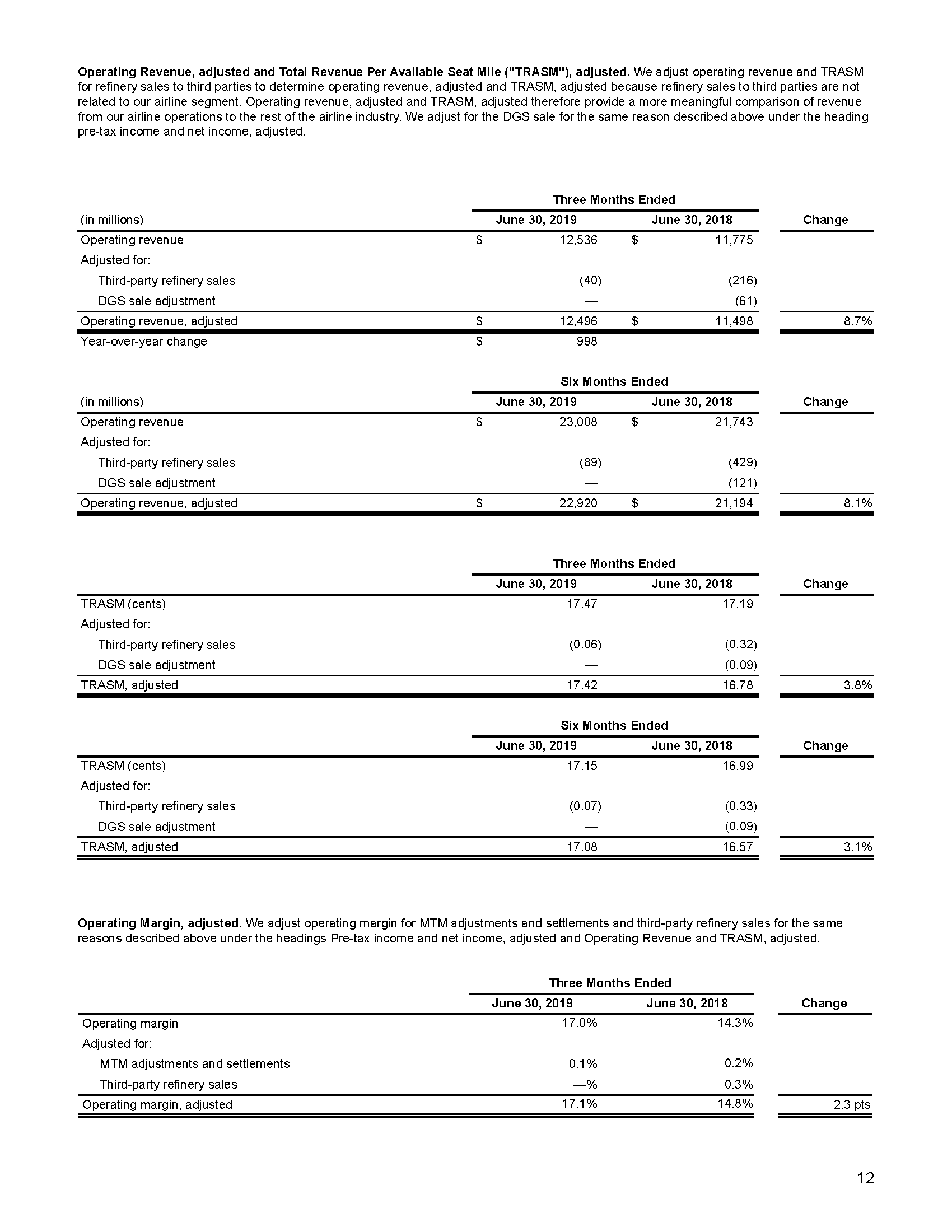 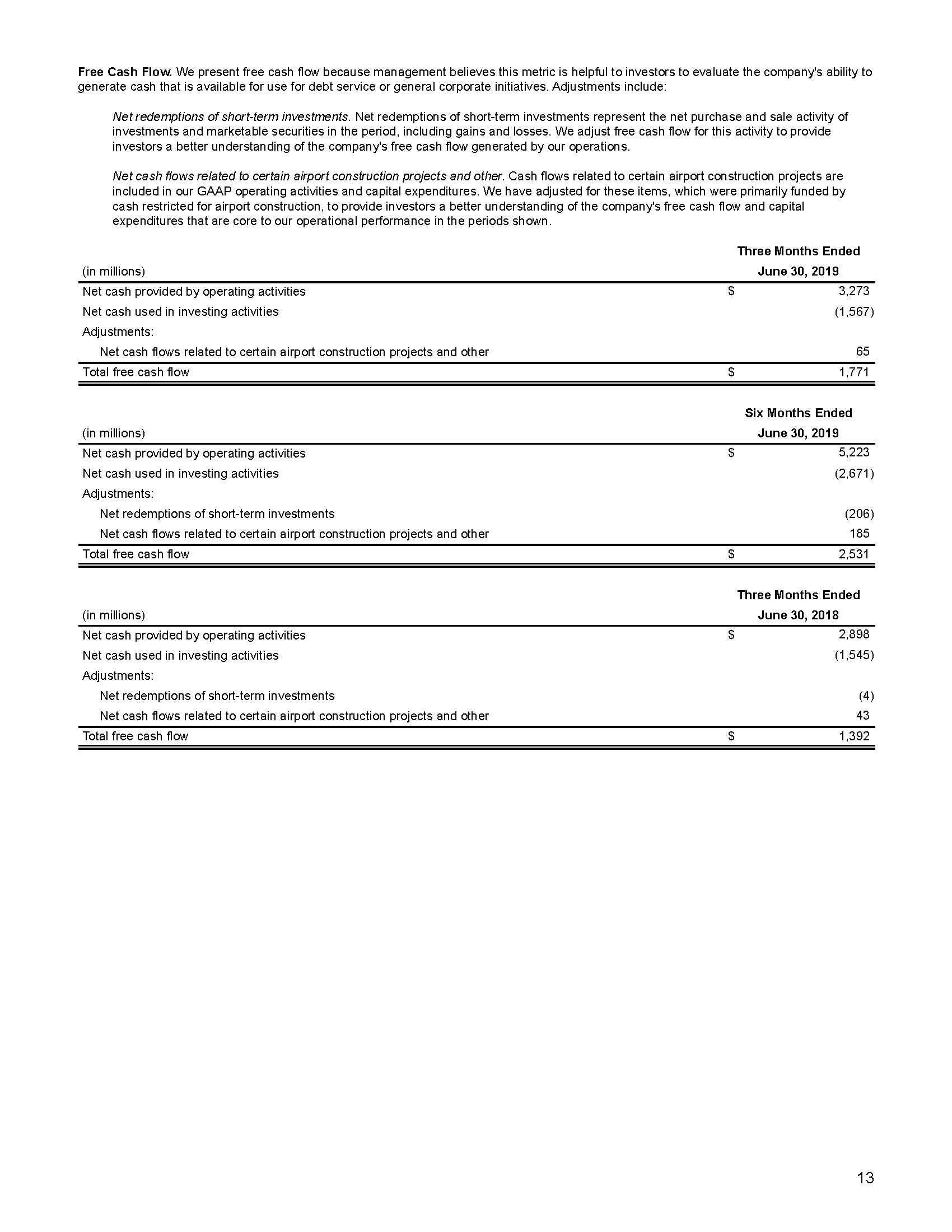 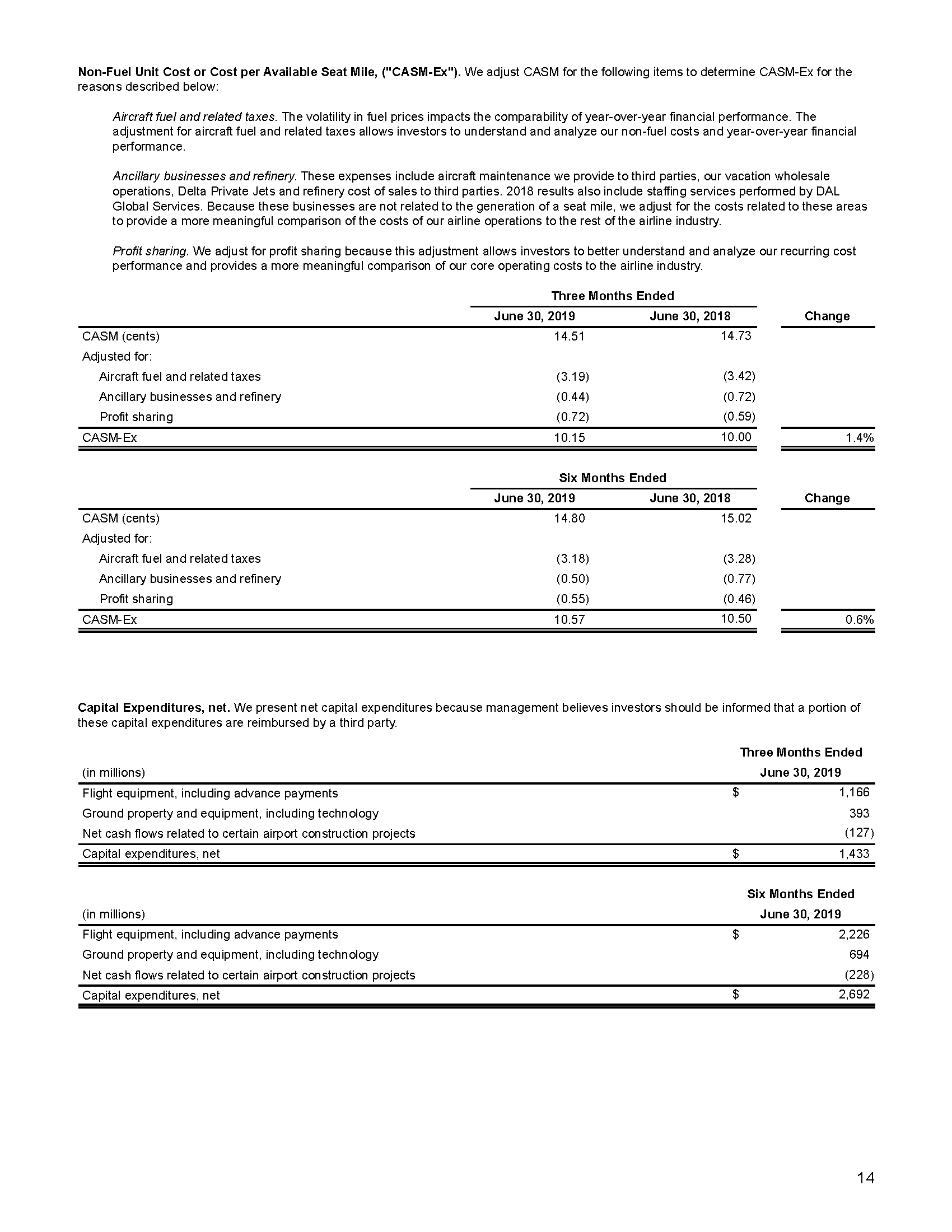 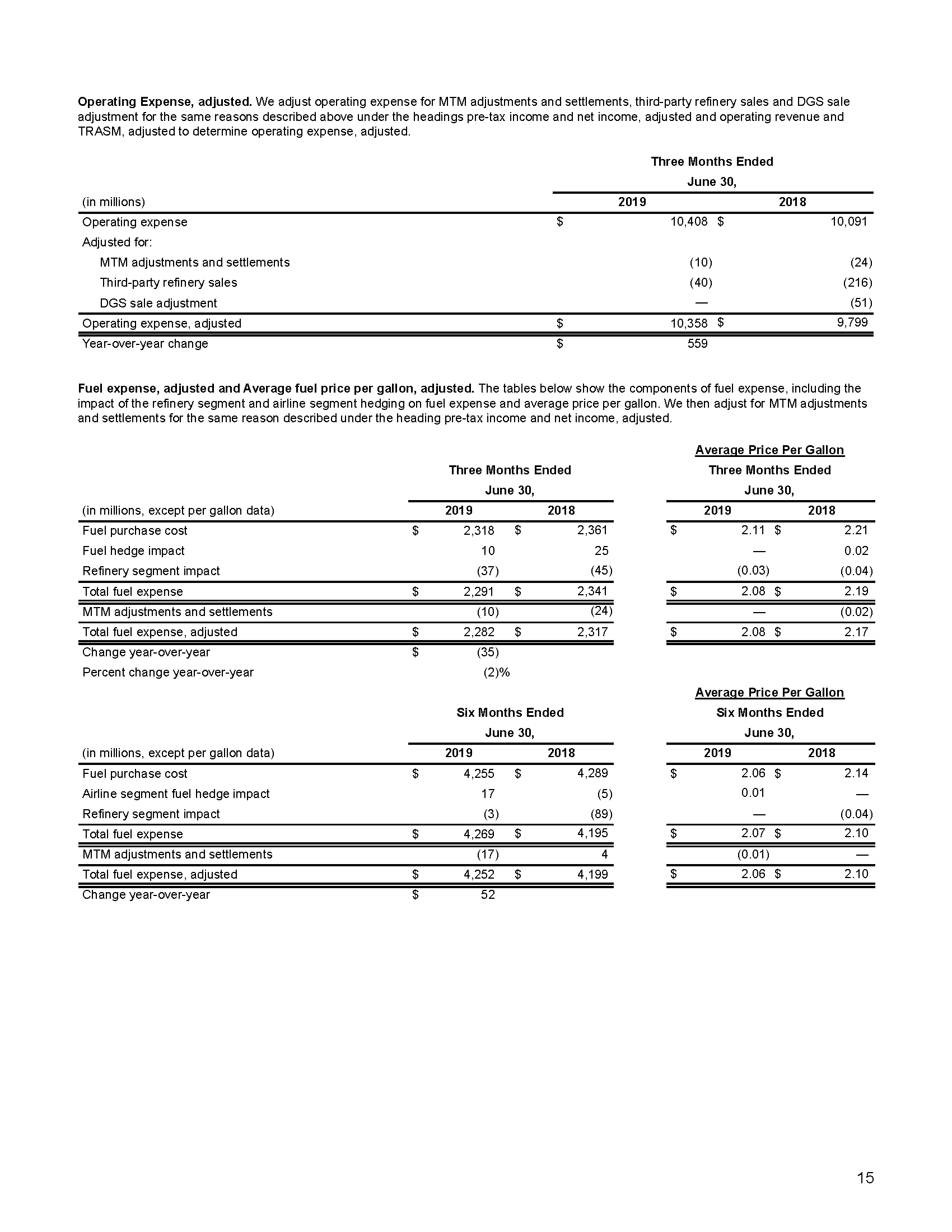 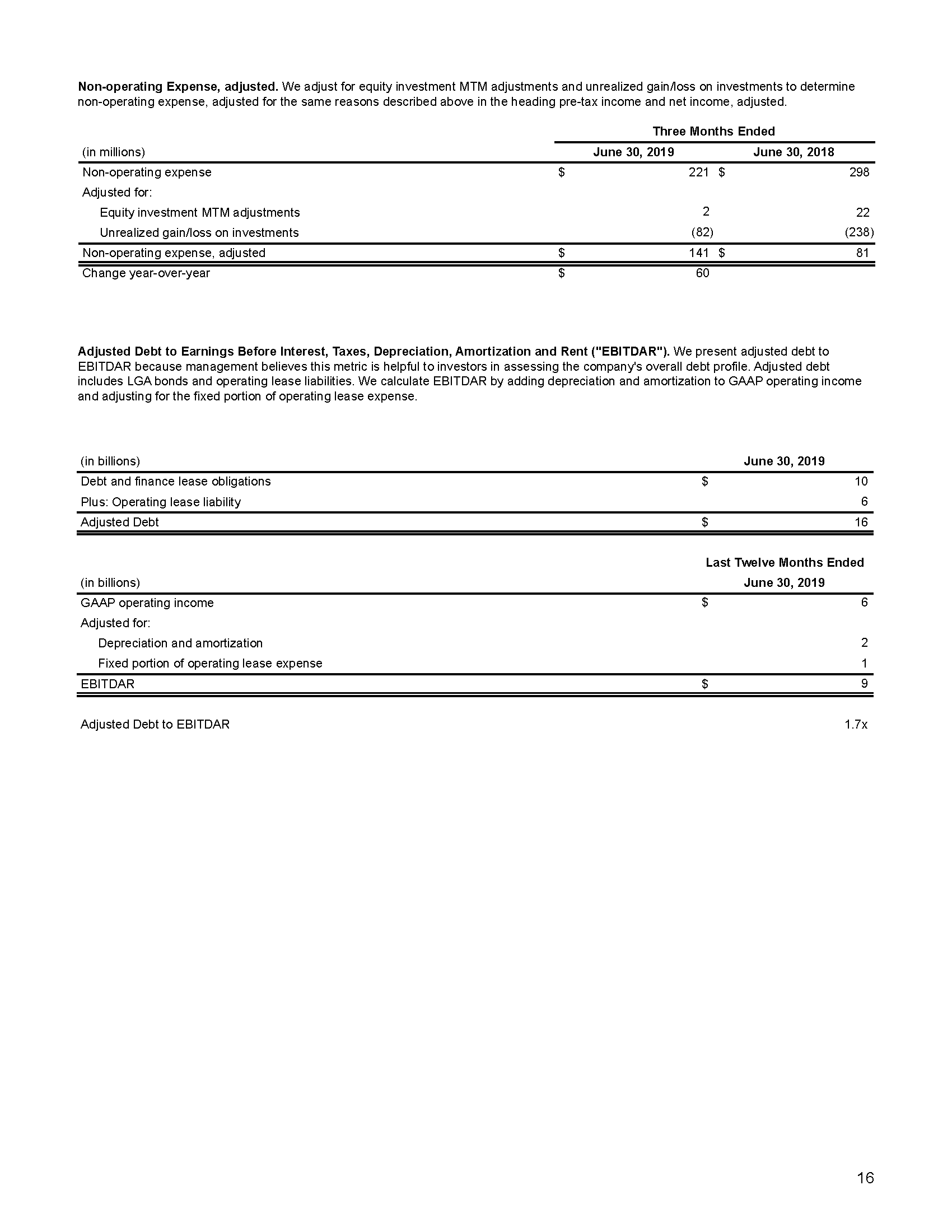