Delta Air Lines today reported financial results for the March quarter 2017. Highlights of those results, including both GAAP and adjusted metrics, are below and incorporated here.

Adjusted pre-tax income for the March 2017 quarter was $847 million, a $713 million decrease from the March 2016 quarter, primarily driven by higher fuel prices.

“Despite fuel price pressures, the Delta people once again delivered solid results across the board, with double digit operating margins, strong improvements in customer satisfaction, and progress on our international expansion with the closing of our Aeroméxico transaction,” said Ed Bastian, Delta’s Chief Executive Officer. “Producing these results in our toughest quarter of the year shows not only how far we’ve come, but also that we have more opportunity in front of us to continue building a better airline for our employees, customers, and owners.” 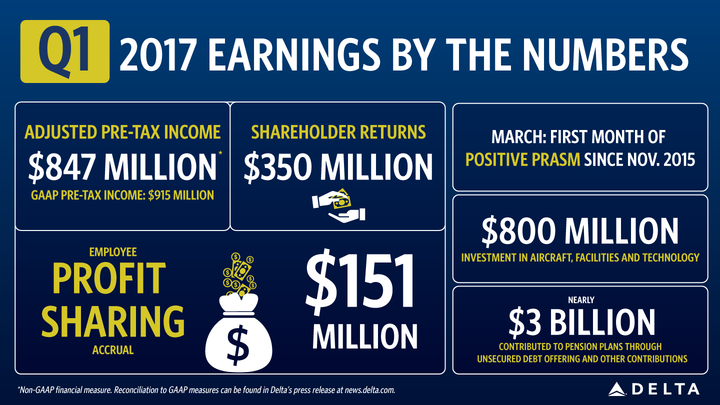 Last week, severe weather in Atlanta caused significant disruptions to Delta’s operations. The company cancelled approximately 4,000 flights as a result of the weather and the subsequent operational recovery. The company returned to normal operations on Sunday afternoon and had a 100% mainline completion factor yesterday. Delta currently estimates the storm will reduce its June quarter pre-tax income by $125 million.

“We hold ourselves to a high standard and we apologize to all of our customers who were impacted by last week’s events,” continued Bastian. “I also want to thank the Delta people for working through some incredibly tough conditions to take care of our customers and reset our operation. They proved again they are the best in the business.”

Delta’s operating revenue for the March quarter was down $103 million versus prior year, including $20 million of lower year over year currency hedge gains. Passenger unit revenues declined 0.5 percent on 0.5 percent lower capacity.

“March marked the first month of positive passenger unit revenues since November 2015 and we are encouraged by the current fare and demand trends across the network. We expect June quarter passenger unit revenues to increase one to three percent and remain positive throughout the year,” said Glen Hauenstein, Delta’s President. “However, we will keep our full year capacity growth capped at one percent to support this unit revenue momentum and the company’s return to margin expansion.”

For the June quarter, Delta is expecting its margins to expand relative to prior year, as the improvement in unit revenues offsets higher costs.

Adjusted fuel expense[4] increased $327 million compared to the same period in 2016 due to 52 percent higher market prices. Delta’s adjusted fuel price per gallon for the March quarter was $1.71, which includes $0.05 cents of benefit from the refinery and $0.09 cents of losses from legacy hedges.

“We expect the entirety of our 2017 margin pressure to have occurred in the March quarter from higher fuel prices. With an improving revenue profile and further improvement as our cost growth moderates in the second half, we are on track to expand margins for the balance of the year,” said Paul Jacobson, Delta’s Chief Financial Officer. “Going forward, by remaining disciplined with our costs and capital, we’ll be well positioned to achieve our long-term financial targets.”

During the quarter, Delta issued $2 billion in unsecured, investment grade debt at a blended rate of just under 3.3%. The proceeds have been contributed to Delta’s pension plans, pre-funding a portion of the company’s already committed 2018-2020 contributions.  As a result, the company will reduce its planned pension contributions from $1.2 billion to $500 million for each of the next three years.

Delta contributed $2.6 billion in cash, including $1.5 billion of the debt proceeds, and $350 million in company stock to the pension plan during the March quarter. Subsequently, in April, Delta made an additional $600 million cash contribution, including the remaining debt proceeds, completing all pension funding for the year. Excluding the $1.5 billion pension contribution, the company generated $0.7 billion of adjusted operating cash flow during the March quarter.

The company continued to invest in the business for the long term with $800 million in aircraft investments, facilities upgrades and technology improvements. Delta also completed its tender offer for an additional 32 percent of the outstanding capital stock of Grupo Aeroméxico S.A.B. de C.V. for an aggregate purchase price of $620 million. Delta now owns just over 36 percent of the outstanding shares of Grupo Aeroméxico and holds options to acquire an additional 13 percent.

Adjusted net debt at the end of the quarter increased to $8.8 billion as a result of the unsecured debt issuance. The company remains committed to achieving its $4 billion debt target by 2020.

For the March quarter, the company returned $349 million to shareholders, comprised of $149 million of dividends and $200 million of share repurchases.

Statements in this investor update that are not historical facts, including statements regarding our estimates, expectations, beliefs, intentions, projections or strategies for the future, may be "forward-looking statements" as defined in the Private Securities Litigation Reform Act of 1995. All forward-looking statements involve a number of risks and uncertainties that could cause actual results to differ materially from the estimates, expectations, beliefs, intentions, projections and strategies reflected in or suggested by the forward-looking statements. These risks and uncertainties include, but are not limited to, the effects of terrorist attacks or  geopolitical conflict; the cost of aircraft fuel; the impact of fuel hedging activity including rebalancing our hedge portfolio, recording mark-to-market adjustments or posting collateral in connection with our fuel hedge contracts; the availability of aircraft fuel; the performance of our significant investments in airlines in other parts of the world; the possible effects of accidents involving our aircraft; the restrictions that financial covenants in our financing agreements could have on our financial and business operations; labor issues; interruptions or disruptions in service at one of our hub, gateway, or key airports; breaches or security lapses in our information technology systems; disruptions in our information technology infrastructure; our dependence on technology in our operations; the effects of weather, natural disasters and seasonality on our business; the effects of an extended disruption in  services provided by third party regional carriers; failure or inability of insurance to cover a significant liability at Monroe’s Trainer refinery; the impact of environmental regulation on the Trainer refinery, including costs related to renewable fuel standard  regulations; our ability to retain management and key employees; competitive conditions in the airline industry; the effects of extensive government regulation on our business; the sensitivity of the airline industry to prolonged periods of stagnant or weak economic conditions; uncertainty in economic conditions and regulatory environment in the United Kingdom leading up to and following the exit of the United Kingdom from the European Union; and the effects of the rapid spread of contagious illnesses. Additional information concerning risks and uncertainties that could cause differences between actual results and forward-looking statements is contained in our Securities and Exchange Commission filings, including our Annual Report on Form 10-K for the fiscal year ended Dec. 31, 2016. Caution should be taken not to place undue reliance on our forward-looking statements, which represent our views only as of April 12, 2017, and which we have no current intention to update. 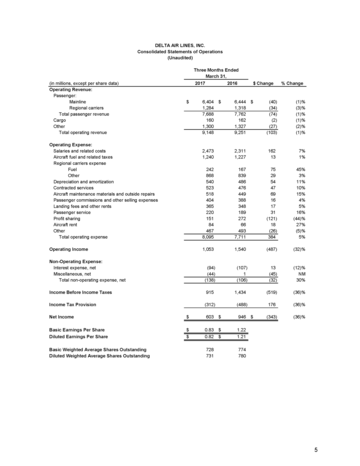 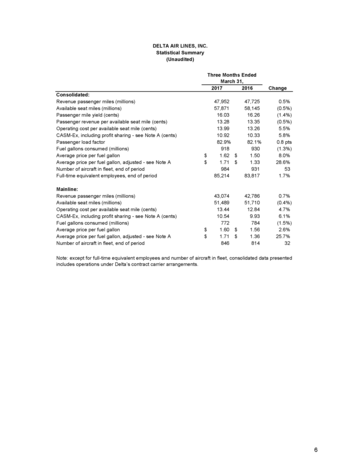 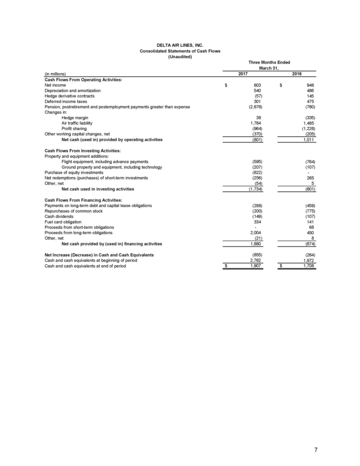 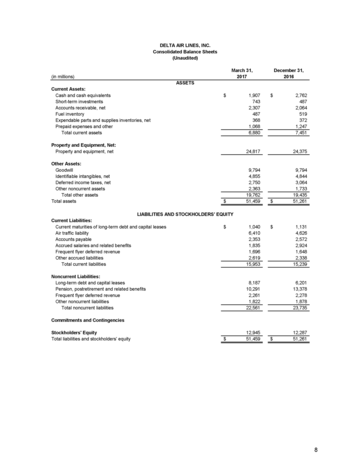 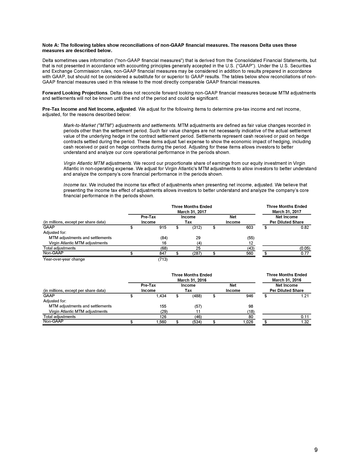 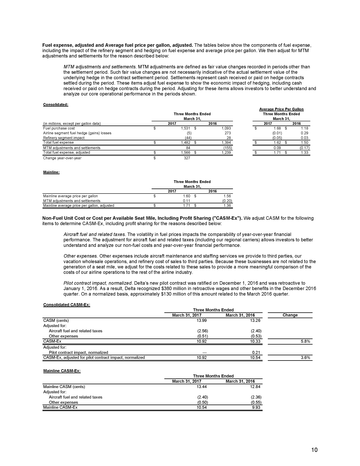 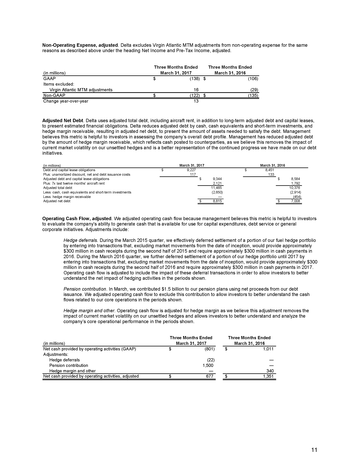