"The March quarter's record results in the face of unprecedented weather show the strength and resilience of Delta.  By delivering the industry's best customer service, operational reliability and financial performance, Delta people continue to show that they are the very best in the business," said Richard Anderson, Delta's chief executive officer.  "Our work is not finished, and there is great opportunity ahead as we expect the June quarter to produce 14% - 16% operating margins.  We are transforming Delta into a high-quality S&P 500 company that consistently delivers strong earnings growth and shareholder returns."

Revenue Environment
Delta's operating revenue improved 5 percent, or $416 million, in the March 2014 quarter compared to the March 2013 quarter, despite $90 million of lost revenue due to weather-related cancellations.  Traffic increased 3.5 percent on a 1.7 percent increase in capacity.

Comparisons of revenue-related statistics are as follows:

"March quarter's top line growth of 5 percent shows the strength of Delta's revenue momentum even through the revenue loss from weather and a shift of the Easter holiday traffic into April," said Ed Bastian, Delta's president. "We see continued revenue strength as we move through the year from corporate revenue gains, the benefits of the Virgin Atlantic joint venture and improved ancillary revenues.  These initiatives, coupled with a solid demand environment, should lead to unit revenue growth in the mid-single digits for the June quarter."

Operations at the Trainer refinery produced a $41 million loss for the March quarter as a result of the same lower market fuel prices that lowered Delta's overall fuel spend.  During the quarter, one of the major crude units at the refinery was taken offline for scheduled modifications which lowered throughput levels.  These modifications will yield a higher level of jet and diesel distillates going forward and improve the profitability of Trainer.  In addition, refinery profitability was negatively impacted by an increase in Renewable Identification Numbers (RINs) expense.

Non-operating expense for the quarter increased by $66 million, driven by a $31 million seasonal loss associated with Delta's 49% ownership stake in Virgin Atlantic, an $18 million loss on extinguishment of debt driven by Delta's debt reduction initiatives, and $39 million higher foreign exchange impact, including a $23 million loss associated with the devaluation of the Venezuelan currency.  These losses were offset by $34 million lower interest expense.

"The March quarter marks another quarter with non-fuel unit cost growth below 2 percent, and the growing momentum of our domestic refleeting and other cost initiatives provide the platform to maintain this performance," said Paul Jacobson, Delta's chief financial officer.  "We are addressing all parts of our cost base through executing our structural cost initiatives, lowering our fuel expense with the refinery and hedging, and reducing our interest burden with additional debt reduction."

Cash Flow
Cash from operations during the March 2014 quarter was $951 million, driven by the company's March quarter profit and the normal seasonal increase in advance ticket sales.  Cash from operations is net of $605 million of contributions made by Delta to its defined benefit pension plans during the quarter.  The company generated $390 million of free cash flow.

Capital expenditures during the March 2014 quarter were $570 million, including $514 million in fleet investments. During the quarter, Delta's net debt maturities and capital leases were $353 million.

Delta ended the quarter with $5.6 billion of unrestricted liquidity and adjusted net debt of $9.1 billion.  The company has now achieved nearly $8 billion in net debt reduction since 2009.

Company Highlights
Delta has a strong commitment to its employees, customers and the communities it serves.  Key accomplishments in the March 2014 quarter include:

Delta recorded a net $78 million special items charge in the March 2013 quarter, including:

Other Matters
Included with this press release are Delta's unaudited Consolidated Statements of Operations for the three months ended March 31, 2014 and 2013; a statistical summary for those periods; selected balance sheet data as of March 31, 2014 and December 31, 2013; and a reconciliation of non-GAAP financial measures.

About Delta
Delta Air Lines serves nearly 165 million customers each year. This year, Delta was named the 2014 Airline of the Year by Air Transport World magazine and was named to FORTUNE magazine's top 50 Most Admired Companies in addition to being named the most admired airline for the third time in four years. With an industry-leading global network, Delta and the Delta Connection carriers offer service to 319 destinations in 57 countries on six continents. Headquartered in Atlanta, Delta employs nearly 80,000 employees worldwide and operates a mainline fleet of more than 700 aircraft. The airline is a founding member of the SkyTeam global alliance and participates in the industry's leading trans-Atlantic joint venture with Air France-KLM and Alitalia as well as a newly formed joint venture with Virgin Atlantic. Including its worldwide alliance partners, Delta offers customers more than 15,000 daily flights, with hubs in Amsterdam, Atlanta, Cincinnati, Detroit, Minneapolis-St. Paul, New York-JFK, New York-LaGuardia, Paris-Charles de Gaulle, Salt Lake City and Tokyo-Narita. Delta has invested billions of dollars in airport facilities, global products, services and technology to enhance the customer experience in the air and on the ground. Additional information is available on delta.com, Twitter @Delta, Google.com/+Delta, Facebook.com/delta and Delta's blog takingoff.delta.com. 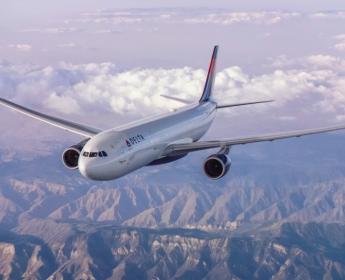