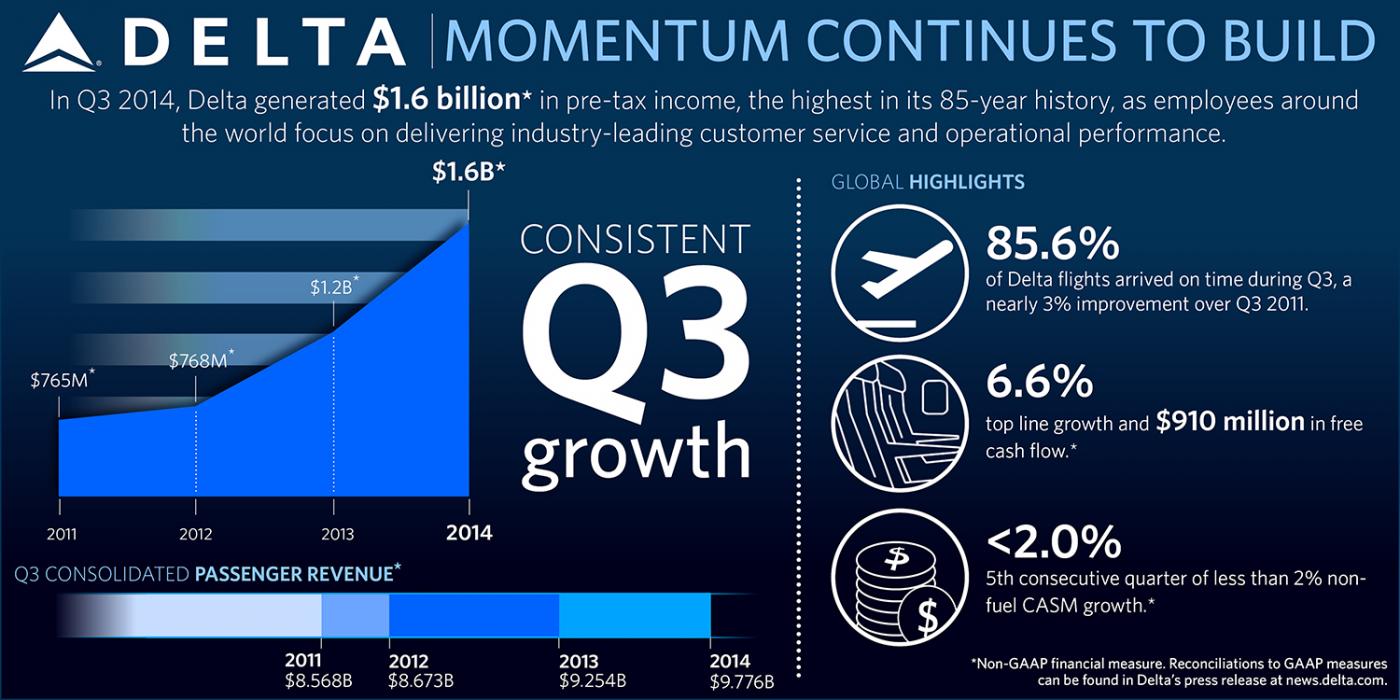 "With another record profit, solid margin expansion and nearly $1 billion of free cash flow, Delta's results are consistent with high-quality S&P 500 industrials," said Richard Anderson, Delta's chief executive officer.  "While we have more work ahead of us to achieve our long-term financial goals, we expect a record fourth quarter of 2014 with an operating margin of 10-12%.  For the full year, we expect a pre-tax profit in excess of $4 billion.  We have the right foundation in place for an even stronger 2015, proven strategies for Delta, and 80,000 Delta employees who are the very best in the industry."

Revenue Environment
Delta's operating revenue improved 7 percent, or $688 million, in the September 2014 quarter compared to the September 2013 quarter, driven by continued strength in corporate and domestic revenues. Traffic increased 3.7 percent on a 3.2 percent increase in capacity.

Comparisons of revenue-related statistics are as follows:

"For the December quarter, the overall revenue environment remains solid, with unit revenues expected to increase by 0-2%, and we are on track to produce another quarter of good top line growth, margin expansion and free cash flow," said Ed Bastian, Delta's president.  "Looking further ahead, our international network provides the largest opportunity for additional margin improvement, as we accelerate our Pacific network restructuring, recalibrate our transatlantic capacity levels, and reap the benefits of our investment in our Latin network."

Cost Performance
Consolidated unit cost excluding fuel expense, profit sharing and special items (CASM-Ex2), was up 0.3 percent in the September 2014 quarter on a year-over-year basis as the benefits of Delta's domestic refleeting and other cost initiatives offset the company's investments in its employees, products and operations.

"The September quarter marks the fifth consecutive quarter with non-fuel unit cost growth below 2 percent, a testament that our cost initiatives are delivering benefits," said Paul Jacobson, Delta's chief financial officer.  "For the December quarter, we expect to again remain in line with our long-term goal of keeping unit cost growth below 2 percent."

Tax expense, excluding special items, increased $629 million compared to the prior year quarter, as the company now recognizes tax expense for financial reporting purposes following the reversal of its tax valuation allowance at the end of 2013.  Delta's net operating loss carryforwards of more than $13 billion largely offset cash taxes due on future earnings.

On a GAAP basis, consolidated CASM increased 12 percent and total operating expense was up $1.4 billion compared to the September 2013 quarter primarily due to special items associated with fleet restructuring and mark-to-market adjustments on fuel hedges settling in future periods.  GAAP fuel expense increased $609 million on a year-over-year basis primarily driven by the hedge performance including mark-to-market adjustments.  GAAP fuel cost per gallon for the quarter was $3.23.  Non-operating expenses for the quarter increased by $56 million as a result of a $134 million special item for loss on extinguishment of debt resulting from Delta's debt reduction initiatives.  On a GAAP basis, tax expense was $222 million in the quarter.

With its strong cash generation in the September 2014 quarter, the company returned $325 million to shareholders through $75 million of cash dividends and $250 million of share repurchases.  For the first nine months of 2014, the company has returned a total of $776 million to shareholders, including $176 million in quarterly dividends and $600 million in share repurchases.

Delta ended the quarter with $6.4 billion of unrestricted liquidity and adjusted net debt of $7.4 billion.  The company has now achieved nearly $10 billion in net debt reduction since 2009.

"Delta's strong operating cash flow, combined with our disciplined capital spending, has resulted in $2.8 billion in free cash flow so far this year.  We have used this cash flow to reduce our net debt levels by $2.0 billion, fund excess contributions of $250 million to our pension plans, and return more than $775 million to our owners through dividends and share repurchases already this year," Jacobson continued.  "With another solid quarter of free cash flow generation ahead of us, we are on track to produce nearly $3.5 billion in free cash flow for 2014."

Delta recorded a net $157 million special items gain in the September 2013 quarter, including:

Other Matters
Included with this press release are Delta's unaudited Consolidated Statements of Operations for the three and nine months ended September 30, 2014 and 2013; a statistical summary for those periods; selected balance sheet data as of September 30, 2014 and December 31, 2013; and a reconciliation of non-GAAP financial measures.

About Delta
Delta Air Lines serves nearly 165 million customers each year. This year, Delta was named the 2014 Airline of the Year by Air Transport World magazine and was named to FORTUNE magazine's 50 Most Admired Companies, in addition to being named the most admired airline for the third time in four years. With an industry-leading global network, Delta and the Delta Connection carriers offer service to 318 destinations in 57 countries on six continents. Headquartered in Atlanta, Delta employs nearly 80,000 employees worldwide and operates a mainline fleet of more than 700 aircraft. The airline is a founding member of the SkyTeam global alliance and participates in the industry's leading trans-Atlantic joint venture with Air France-KLM and Alitalia as well as a newly formed joint venture with Virgin Atlantic. Including its worldwide alliance partners, Delta offers customers more than 15,000 daily flights, with key hubs and markets including Amsterdam, Atlanta, Boston, Detroit, Los Angeles, Minneapolis/St. Paul, New York-JFK, New York-LaGuardia, Paris-Charles de Gaulle, Salt Lake City, Seattle and Tokyo-Narita. Delta has invested billions of dollars in airport facilities, global products, services and technology to enhance the customer experience in the air and on the ground. Additional information is available on delta.com, Twitter @Delta, Google.com/+Delta, Facebook.com/delta and Delta's blog takingoff.delta.com.

(1)    Note A to the attached Consolidated Statements of Operations provides a reconciliation of non-GAAP financial measures used in this release and provides the reasons management uses those measures.

(2)    CASM - Ex: In addition to fuel expense, profit sharing and special items, Delta believes excluding ancillary business costs is helpful to investors because ancillary business costs are not related to the generation of a seat mile. These businesses include aircraft maintenance and staffing services Delta provides to third parties and Delta's vacation wholesale operations. The amounts excluded were $175 million and $224 million for the September 2014 and September 2013 quarters, respectively and $552 million and $574 million for the nine months ended September 30, 2014 and 2013, respectively. Management believes this methodology provides a more consistent and comparable reflection of Delta's airline operations.

Statements in this press release that are not historical facts, including statements regarding our estimates, expectations, beliefs, intentions, projections or strategies for the future, may be "forward-looking statements" as defined in the Private Securities Litigation Reform Act of 1995. All forward-looking statements involve a number of risks and uncertainties that could cause actual results to differ materially from the estimates, expectations, beliefs, intentions, projections and strategies reflected in or suggested by the forward-looking statements.  These risks and uncertainties include, but are not limited to, the cost of aircraft fuel; the availability of aircraft fuel; the impact of posting collateral in connection with our fuel hedge contracts; the impact of significant funding obligations with respect to defined benefit pension plans;  the restrictions that financial covenants in our financing agreements will have on our financial and business operations; labor issues; interruptions or disruptions in service at one of our hub airports; our dependence on technology in our operations; disruptions or security breaches of our information technology infrastructure; the ability of our credit card processors to take significant holdbacks in certain circumstances; the possible effects of accidents involving our aircraft; the effects of weather, natural disasters and seasonality on our business; the effects of an extended disruption in services provided by third party regional carriers; failure or inability of insurance to cover a significant liability at the Trainer refinery; the impact of environmental regulation on the Trainer refinery, including costs related to renewable fuel standard regulations; our ability to retain management and key employees; competitive conditions in the airline industry; the effects of extensive government regulation on our business; the effects of terrorist attacks; the effects of the rapid spread of contagious illnesses; and the costs associated with war risk insurance.

Additional information concerning risks and uncertainties that could cause differences between actual results and forward-looking statements is contained in our Securities and Exchange Commission filings, including our Annual Report on Form 10-K for the fiscal year ended December 31, 2013.  Caution should be taken not to place undue reliance on our forward-looking statements, which represent our views only as of October 16, 2014, and which we have no current intention to update.

Note A: The following tables show reconciliations of non-GAAP financial measures. The reasons Delta uses these measures are described below.

Forward Looking Projections. Delta is unable to reconcile certain forward-looking projections to GAAP as the nature or amount of special items cannot be estimated at this time.

Net Income and Pre-Tax Income, excluding special items.   Delta excludes special items from net income and pre-tax income because management believes the exclusion of these items is helpful to investors to evaluate the company's recurring core operational performance in the periods shown. Therefore, we adjust for these amounts to arrive at more meaningful financial measures. Special items excluded in the tables below showing the reconciliation of net income and pre-tax income are:

(a)    Mark-to-market adjustments on fuel hedges recorded in periods other than the settlement period ("MTM adjustments"). MTM adjustments are based on market prices at the end of the reporting period for contracts settling in future periods. Such market prices are not necessarily indicative of the actual future value of the underlying hedge in the contract settlement period. Therefore, excluding these adjustments allows investors to better understand and analyze the company's core operational performance in the periods shown.

(d)   Income tax. Delta projects that our annual effective tax rate for 2014 will be approximately 38%.  Accordingly, this adjustment represents the income tax effect associated with our special items.  We believe this adjustment allows investors to better understand and analyze the company's core operational performance in the periods shown.

Operating Margin.   Delta excludes MTM adjustments and restructuring and other items from operating margin for the same reasons as described above under the heading Net Income and Pre-tax Income.

Refinery sales. Delta's refinery segment provides jet fuel to the airline segment from its own production and from jet fuel obtained through agreements with third parties. Activities of the refinery segment are primarily for the benefit of the airline.  However, from time to time, the refinery sells fuel by-products to third parties.  These sales are recorded gross within other revenue and other operating expense.  We believe excluding refinery sales from operating margin allows investors to better understand and analyze the impact of fuel cost on our results in the periods shown.

Free Cash Flow. Delta presents free cash flow because management believes this metric is helpful to investors to evaluate the company's ability to generate cash that is available for use for debt service or general corporate initiatives.

Operating Expense. Delta excludes restructuring and other items and MTM adjustments from operating expense for the same reasons as described above under the heading Net Income and Pre-Tax Income, excluding special items.

Fuel Expense, Adjusted and Average Fuel Price per Gallon Adjusted.   The tables below show the components of fuel expense, including the impact of the refinery and hedging on fuel expense and average price per gallon.  We then exclude MTM adjustments from total fuel expense and average price per gallon because, as described above, excluding these adjustments allows investors to better understand and analyze Delta's costs for the periods reported.