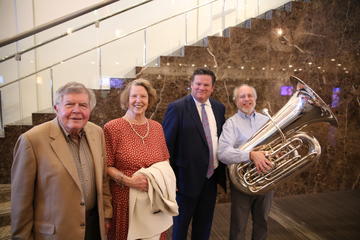 The Delta Air Lines Foundation gift completes the Musicians’ Endowment Campaign nearly two years ahead of schedule. To date, more than $25 million in funds have been committed to the Musicians’ Endowment Fund and nine musicians have joined the Orchestra over the past year. The two newest members of the Atlanta Symphony Orchestra are Samuel Schlosser, Principal Trombone, and Gina Hughes, Piccolo and Flute.

To recognize the generous gift from The Delta Air Lines Foundation, the Principal Tuba Chair, held by Michael Moore, will be endowed and named The Delta Air Lines Chair. The named chair is a fitting tribute to Moore, who is celebrating his 49th season with the Atlanta Symphony Orchestra.

The Musicians’ Endowment Fund was launched in December 2014 as a key component of the Woodruff Arts Center’s $100 million Transformation Campaign. The Transformation Campaign, one of the largest fundraising efforts in the Arts Center’s history, is designed to dramatically increase endowments, renovate The Alliance Theatre and provide greater access to the arts for families.

The Delta Air Lines Foundation is a nonprofit corporation formed in 1968 to enhance Delta’s charitable giving. The Foundation is focused on the key areas of health and wellness, arts and culture, education and diversity. Foundation contributions are unrestricted, allowing recipients to use funds where they are needed the most.

Delta is the presenting sponsor of the Atlanta Symphony Orchestra.