JOHANNESBURG, Sept. 28, 2006 -- Delta Air Lines and Nationwide Airlines today announced that they have signed a Memorandum of Understanding to pursue agreements to codeshare, allow members in Delta’s SkyMiles program to accrue and redeem miles for flights on Nationwide, and to work towards other marketing co-operation. The agreement includes developing codeshare services on Nationwide Airlines to and from markets beyond its hub at O.R. Tambo International Airport (previously Johannesburg International Airport).

This growth of Delta’s network will provide customers with a wider array of destinations for travel as well as new mileage-earning opportunities. Subject to government approvals, initially, Delta plans to place its code on Nationwide service between Johannesburg and destinations such as Cape Town and Durban with further growth anticipated. The two carriers plan to have this service in place as early as possible to support Delta’s new service between Atlanta and Johannesburg beginning Dec. 4.

Commenting on the announcement, Glen Hauenstein, Delta’s executive vice president of network planning and revenue management said:  “In December Delta will become the only major U.S. airline to operate flights between the United States and Africa with service to Johannesburg and Dakar from the world’s largest airline hub in Atlanta, and with nonstop service to Accra from the world’s financial capital of New York (Dakar and Accra service are subject to government approvals).  Our ability to market services on Nationwide Airlines will give customers even greater choices for travel beyond Johannesburg thanks to Nationwide’s extensive service across Southern Africa.”

Delta’s new service between South Africa and the United States is the latest in a series of more than 50 new international routes added or announced by Delta in the last year as part of the largest international expansion in the airline’s history.  Delta customers from Africa via Atlanta would have convenient connecting opportunities to more than 140 North American cities.

Nationwide Airlines’ CEO, Vernon Bricknell said:  “We are delighted at the prospect of developing a closer relationship with Delta, and believe that this will bring real benefits to our customers and our business.  Delta is one of America’s premier airlines and their entrance into our marketplace is exciting news for South African and American customers alike”.

Nationwide and Delta also plan to develop the ability for members of Delta’s SkyMiles programme to earn and redeem miles on flights operated by Nationwide Airlines within Africa.

About Nationwide Airlines
Nationwide Airlines operated its first flight on the 5th December 1995 and has recently celebrated its 10th year of scheduled passenger services within the Republic of South Africa and Regional Africa.  In November 2003, Nationwide Airlines commenced service three times weekly between Johannesburg and London-Gatwick with the Boeing 767-300 aircraft type and intends on extending this service to a daily frequency in the near future.  The Company operates an entirely Boeing fleet and is the largest privately owned airline in the Southern Hemisphere.  Nationwide Airlines was recently awarded the prestigious status of “Best Domestic Airline” as voted by ASATA and Diners Club International.  Nationwide Airlines has grown successfully as a result of exceptional customer service levels both on the ground and in the air and leads the way in South Africa with service enhancement initiatives such as self check-in at airport kiosks and paperless travel.

About Delta
Delta Air Lines (Other OTC: DALRQ) offers customers service to more destinations than any global airline with Delta and Delta Connection carrier service to 292 destinations in 46 countries.  With more than 50 new international routes added in the last year, Delta is America’s fastest growing international airline and is the world’s leading carrier between the United States and destinations across Europe, India and Israel with flights to 29 trans-Atlantic destinations.  To Latin America and the Caribbean, Delta offers nearly 400 weekly flights to 48 destinations.  Delta's marketing alliances also allow customers to earn and redeem SkyMiles on more than 14,000 flights offered by SkyTeam and other partners. Delta is a founding member of SkyTeam, a global airline alliance that provides customers with extensive worldwide destinations, flights and services. Including its SkyTeam and worldwide codeshare partners, Delta offers flights to 461 worldwide destinations in 96 countries. Customers can check in for flights, print boarding passes and check flight status at delta.com.

About the SkyMiles Programme
The award-winning Delta SkyMiles program offers members multiple mileage-earning opportunities when flying Delta, Delta Shuttle®, the Delta Connection® carriers, Delta AirElite® and other SkyTeam® airlines.  Additional mileage-building opportunities are offered through more than 100 partners such as participating hotels, car rental companies, telecommunication services, and more.  Delta led the airline industry by redeeming 3.3 million Award Tickets in 2005 and more than 9 million Award Tickets over the last three years.  Now in its 25th year, the SkyMiles program received a “Lifetime Achievement Award” at the 2006 Freddie Awards in recognition of its many contributions to the airline loyalty industry. 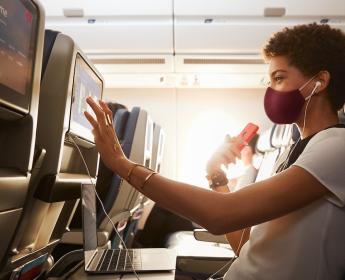