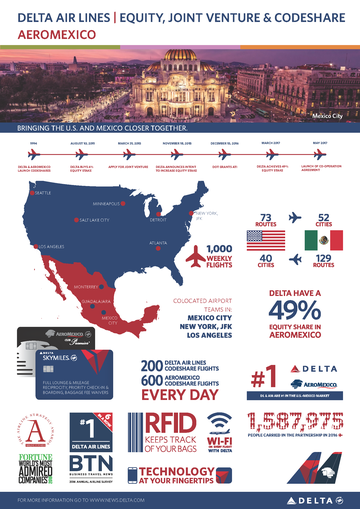 Grupo Aeroméxico, S.A.B. de C.V. and Delta Air Lines today begin their joint cooperation agreement (JCA) to operate transborder flights between the United States and Mexico. Delta and Aeromexico have confirmed with the U.S. Department of Transportation (DOT) and Mexico’s Federal Economic Competition Commission (COFECE) that they have completed the steps required to launch the JCA.

The carriers are writing a new chapter in the history of aviation in the Americas with the first immunized transborder alliance between Mexico and the United States. This partnership will allow the carriers to expand competition and serve new destinations. Additional service and more convenient schedules will benefit customers of both companies, while deepening the relationship the airlines have shared for more than 20 years.

Starting today, Delta and Aeromexico will work together to enhance the customer experience on the ground and in the air by investing in airport facilities, boarding gates and lounges. The two companies will also be able to implement joint sales and marketing initiatives in both countries.

"The ability to cooperate fully with Aeromexico brings additional competition to one of the most dynamic transborder markets in the world,” said Delta’s CEO, Ed Bastian. “Our opportunity to leverage Delta’s experience and our proven record of successful joint ventures, together with a long history of working with Aeromexico, will make this a great JCA.  We are now well positioned to provide significant benefits to our customers, our businesses and our employees.”

Aeromexico CEO Andres Conesa said, “This historic agreement is very important for our customers, who will benefit from a greater choice of flights and connectivity between both countries. For our employees, it represents an extraordinary opportunity for growth and the adoption of best practices that will make us the best alliance in the region. We are also pleased that this agreement will help strengthen the relationship between Mexico and the United States by offering greater connectivity between the two countries than ever before.”

Delta will provide service in the United States through its connecting hubs in Atlanta, Detroit, Los Angeles, Minneapolis-St. Paul, New York, Salt Lake City and Seattle; Aeromexico will offer greater access to Mexico through its hubs in Mexico City, Monterrey and Guadalajara.

Delta and Aeromexico have a long history of working together. They launched their first codeshare in 1994. In 2011, Delta entered into an enhanced commercial agreement with Aeromexico, and in 2012, Delta invested USD$65 million in shares of Grupo Aeroméxico, the parent company of Aeromexico. In 2015, Delta and Aeromexico filed an application with the U.S. Department of Transportation and the Mexican Federal Economic Competition Commission (COFECE) seeking approval of the JCA covering transborder flights between the United States and Mexico. In 2016, both airlines accepted the conditions set by the authorities, and in 2017, they implemented the actions necessary to comply with the required remedies.

Grupo Aeromexico, S.A.B. de C.V. is a holding company whose subsidiaries are engaged in commercial aviation in Mexico and the promotion of passenger loyalty programs. Aeromexico, Mexico’s global airline, operates more than 600 daily flights and its main hub is in Terminal 2 at the Mexico City International Airport. Its destinations network features more than 80 cities on three continents, including 44 destinations in Mexico, 19 in the United States, 15 in Latin America, four in Canada, four in Europe and three in Asia.

The Group's fleet of more than 130 aircraft is comprised of Boeing 787, 777 and 737 jet airliners and next generation Embraer 170 and 190 models. In 2012, the airline announced the most significant investment strategy in aviation history in Mexico, to purchase 100 Boeing aircraft including 90 MAX B737 jet airliners and 10 B787-9 Dreamliners.

As a founding member of SkyTeam, Aeromexico offers customers more than 1,000 destinations in 177 countries served by the 20 SkyTeam airline partners rewarding passengers with benefits including access to 672 premium airport lounges around the world. Aeromexico also offers travel on its codeshare partner flights with Delta Air Lines, Alaska Airlines, Avianca, Copa Airlines and Westjet with extensive connectivity in countries like the United States, Brazil, Canada, Chile, Colombia and Peru. www.aeromexico.com www.skyteam.com 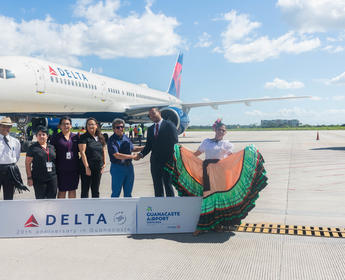