Delta Air Lines and its partner Aeromexico will connect the city of Detroit with Queretaro starting Sept. 17, 2018, creating a bridge between these two major industrial cities. 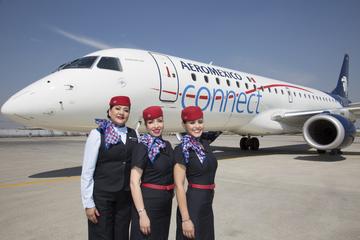 This is the 13th route launched under the Joint Cooperation Agreement between both airlines, strengthening the power of the network in the transborder market.

Detroit is famous for its automotive industry; however, the city also offers extensive cultural diversity. Travelers will be able to discover the city’s theater district, the second largest of its kind in the United States after Broadway in New York City, or visit the Eastern Market that has served the city for more than 170 years.

The city is home to the Detroit Institute of Arts, housing a collection regarded among the top six museums in the United States, featuring “The Detroit Industry Murals”, one of the works of the leading exponents of muralism in Mexico, Diego Rivera.

The capital city of Queretaro offers a blend of history and modernity. Its historic center, considered a World Heritage Site by UNESCO, offers ample information not only about the state’s past but also about the history of Mexico. Its architecture, dating back to the 16th century, offers enviable panoramic views that take visitors back in time.

“Connectivity is crucial to a tourist destination like Queretaro. Due to its geographic location, our state is strategically close to the country’s main ports and cities. Queretaro has been strengthening its international connectivity in recent years and, today, Aeromexico indisputably contributes as it bets on Queretaro once again, and its potential for tourism, industry, and business, with this new flight that unites us with Detroit, a major hub for travelers from across the globe. Our state thus strengthens its presence in our main international tourist market, the United States”, said Hugo Burgos García, Secretary of Tourism of the State of Queretaro.

The destination has also welcomed modernization as it ranks first in economic innovation in Mexico according to the National Competitiveness Institute (IMCO). The state of Queretaro holds fourth place in aerospace investment worldwide, and 45 percent of Foreign Direct Investment in the aerospace industry in Mexico.

“We are pleased to see Aeromexico flying four routes from Detroit just one year after the airline returned to Detroit Metropolitan Airport”, said Wayne County Airport Authority Interim CEO Chad Newton. “Queretaro is another route important to our revived and vibrant auto industry. It is also an example of DTW’s growth. Queretaro will become the third new international destination from Detroit added by an airline this year.”

“At Aeromexico, we strive not only to connect these two destinations and boost the region’s industrial corridor, but also to promote the tourist and cultural potential offered by both cities. We are confident that our passengers will be able to enjoy both destinations to their fullest,” said Paul Verhagen, Senior Vice President of International Sales at Aeromexico.

The route will be operated on Embraer 190 aircraft with 99 passenger seats, 11 in Clase Premier —Aeromexico’s Business Class Cabin, with the following schedule:

The new route provides customers more options to connect from Delta’s second-largest hub to cities such as Chicago, Cleveland, Grand Rapids and Milwaukee, as the new service drives business and boosts the economy of both countries, while offering customers the possibility of discovering new experiences through the distinctive service provided by Mexico’s global airline.