"If you have any items you wish to discard, please do so now as flight attendants begin to make one last round around the cabin," the P.A. announces, as the plane begins to make its descent. Recyclable goods like empty soda cans and plastic bottles are gathered from tray tables, handed off to a flight attendant, then, at Delta, are likely transformed into a home.

Last Friday in Atlanta, Delta employees worked alongside two Atlanta families to put the finishing touches on the 10th and 11th Habitat for Humanity homes funded by the airline's Inflight Recycling Program.

The innovative program has raised $1 million in proceeds for Habitat since 2007, when flight attendant Susan Powell first started the program. To reduce waste on Delta flights, paper, plastic and aluminum from food and beverage products are collected and transported to recycling centers in 36 cities worldwide. The program has recycled over 230 tons of aluminum thus far, which is enough to make five A350 aircraft. 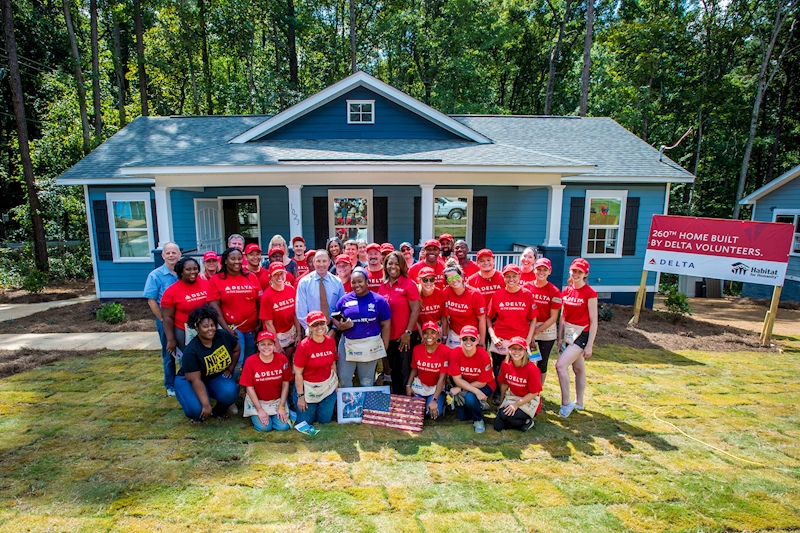 In a quaint neighborhood miles from the Atlanta airport, two single-mothers and their children stood misty-eyed on the porches of their new homes at the dedication. "My house leader knew exactly what I wanted; from the railing, up to my windows, everything was so me," said first-time Habitat homeowner Kedre Clark.

"My kids and I want to say thank you, guys," added her now neighbor, Demetrius Harvey, with her 76-piece homeowner toolkit in hand. "I can only describe this as a blessing."

​​The next-door homes were numbers 260 and 261 Delta has built with Habitat in 12 countries. In ten short days, Delta employees volunteered 4,800 hours building alongside the future homeowners. Volunteers were led by Delta employees and longtime Habitat participants, Kim Mills-Smith and Scott Meader. Among the volunteers were past participants of a Delta Global Build.

"Helping our neighbors soar is core to who we are at Delta," said Tad Hutcheson – Managing Director, Community Engagement. "The two new homes in our backyard mark the commitment we've built with Habitat to make Atlanta — and the world — stronger, safer and prepared for a sustainable future."

Families in need of decent, affordable housing can apply for homeownership with their local Habitat for Humanity. Local Habitat family selection committees choose homeowners based on three criteria: the applicant's level of need, their willingness to partner with Habitat, and their ability to repay an affordable mortgage. As part of their willingness to partner, Habitat's homeowners invest hundreds of hours of their own labor, called "sweat equity," working alongside volunteers and other Habitat homeowners. 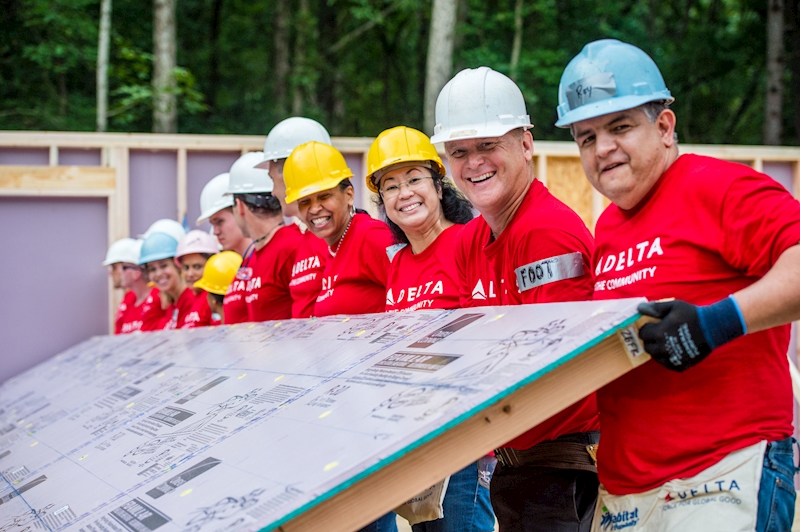 "The proceeds from Delta's Inflight Recycling Program have helped empower so many families to build strength, stability and independence through shelter," said Julie Laird Davis, Vice President of Corporate and Foundation Relations for Habitat for Humanity International. "We are thankful for the ongoing support and partnership with Delta that allows us to continue to serve families in need of affordable housing and a decent place to ​call home."

The Inflight Recycling Program, which has helped make homeownership possible for families in five cities, illustrates the airline's commitment to Global Health and Wellness as well as sustainability. Annually, Delta contributes 1 percent of its net profits to charitable organizations like Habitat — a sum that totaled to over $45 million last year.

Each year, over 2,500 Delta employees volunteer their time and talent with Habitat to build homes in the U.S. and internationally to offer families safe and affordable homes. Following Delta's Global Build in Guangzhou, China in April, the airline also has builds in New York, Seattle and Los Angeles in its flight plan this fall.