The fourth annual Delta Festival Shuttle from Los Angeles to Austin took off on Friday in partnership with HBO, and with it, more than 130 guests were transported to Westworld – a place where fantasy and technology meet and guests are encouraged to "Live Without Limits." 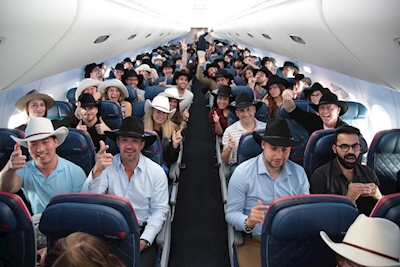 Based on HBO's hit show, the flight incorporated a number of themed elements and comes ahead of Westworld's Season 2 debut on April 22. At boarding, the gate information display showed "Westworld" as the destination of the flight. Once onboard, guests sipped on Westworld-inspired cocktails. Each seat had a white or black hat, and guests received themed gifts from Delta and HBO as well as access to HBO's Westworld Park in Austin. In addition to the various onboard amenities, guests enjoyed a pre-flight brunch at Barney's Beanery at LAX – where they mingled with in-character Westworld actors – and received complimentary Silver Medallion Status through January 2019. A few lucky passengers selected at random won free round-trip tickets to a number of nonstop Delta destinations from LAX, including Mexico, Amsterdam, Shanghai, London and Paris.

"In its fourth year, the Delta Festival Shuttle has become a popular way to get to Austin each March, and adding a creative partner like HBO made the Westworld shuttle one of our most fun and interactive concepts yet," said Ranjan Goswami, Delta's Vice President – Los Angeles & Sales-West. "Our ultimate goal is to continue earning the business of LA-based high value customers and emerging high value customers in the tech, entertainment, production and media communities as they travel to major industry events through unique and curated experiences only Delta can provide."

"In the lead up to the Season 2 premiere, our goal was to immerse consumers into the universe of Westworld on the ground in Austin," said Steven Cardwell, HBO's Director of Program Marketing. "Partnering with Delta allowed us to extend the experience of a journey to the park beyond our offering at SXSW—giving fans the first ever real-world flight to Westworld."

The festival shuttle concept—designed to engage members of LA's tech, entertainment, influencer and media communities in a relevant way—has become a valuable addition to the airline's efforts to be the carrier of choice in LA, where Delta has been the fastest-growing carrier at Los Angeles International Airport since 2009.